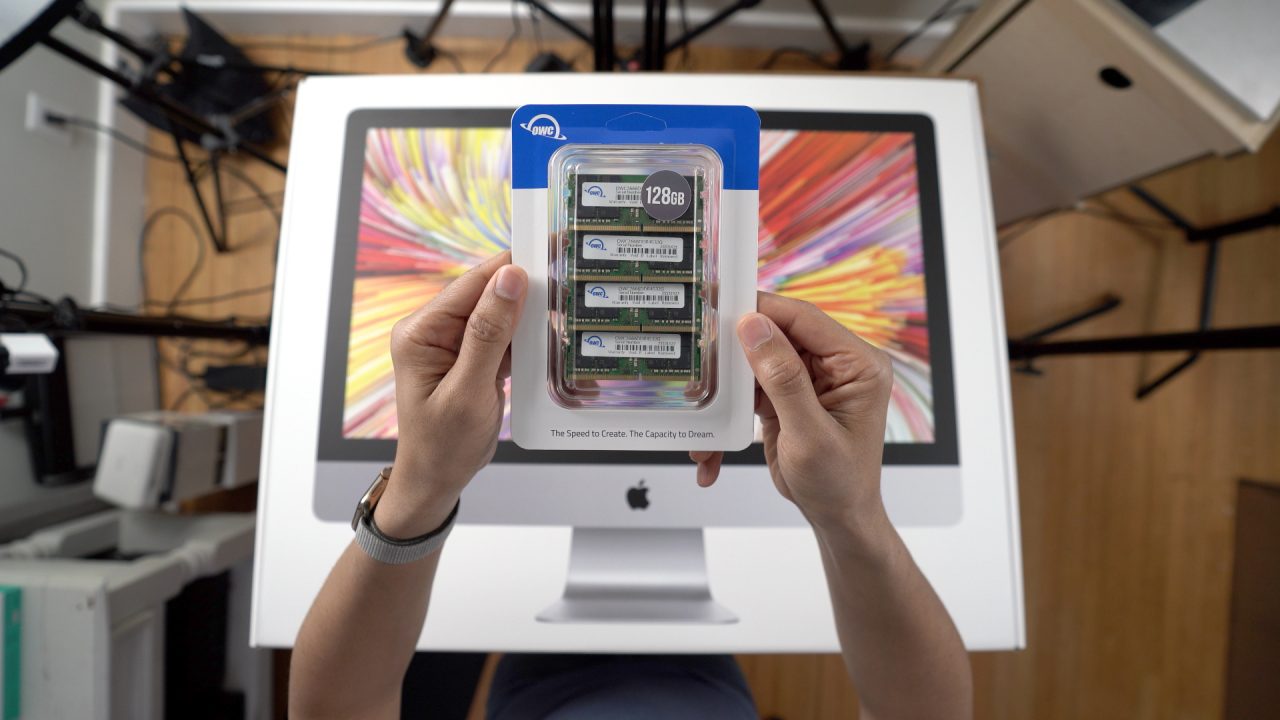 In addition to the CPU and GPU, there’s another key upgrade element that got some love this year: Memory, and lots of it. For the first time, it’s now possible to upgrade the 27-inch 5K iMac with 128GB of RAM, although you’ll need to do so using third-party memory suppliers.

The good news is that even if you’re not interested in maxing out to 128GB of RAM, it’s incredibly easy to upgrade your 5K iMac’s memory, and you can save a whole lot of money in the process of doing so. Watch our video tutorial for a step-by-step 5K iMac memory upgrade guide.

As initially discovered by OWC, the 2019 27-inch 5K iMac can support up to 128GB of RAM via a 4 x 32GB SO-DIMM module configuration. Hence, if you wish to upgrade your RAM, you’ll want to configure your iMac with the base 8GB amount, and buy compatible aftermarket RAM modules. OWC sells several RAM upgrade options for the 2019 5K iMac, and it was willing to send me a 128GB sample to test on video.

Save lots of money with a DIY RAM upgrade

A 64GB memory upgrade, the maximum amount of memory configurable using Apple’s build-to-order tool, costs $1000. OWC sells its 128GB upgrade kit — which provides users with DOUBLE the RAM — for $1099, or just $99 more than Apple’s 64GB configuration. That’s insane, and really shows how crazy Apple’s memory prices continue to be. I highly recommend that you avoid upgrading memory during the build-to-order configuration process, and use compatible third-party memory from a reputable dealer. 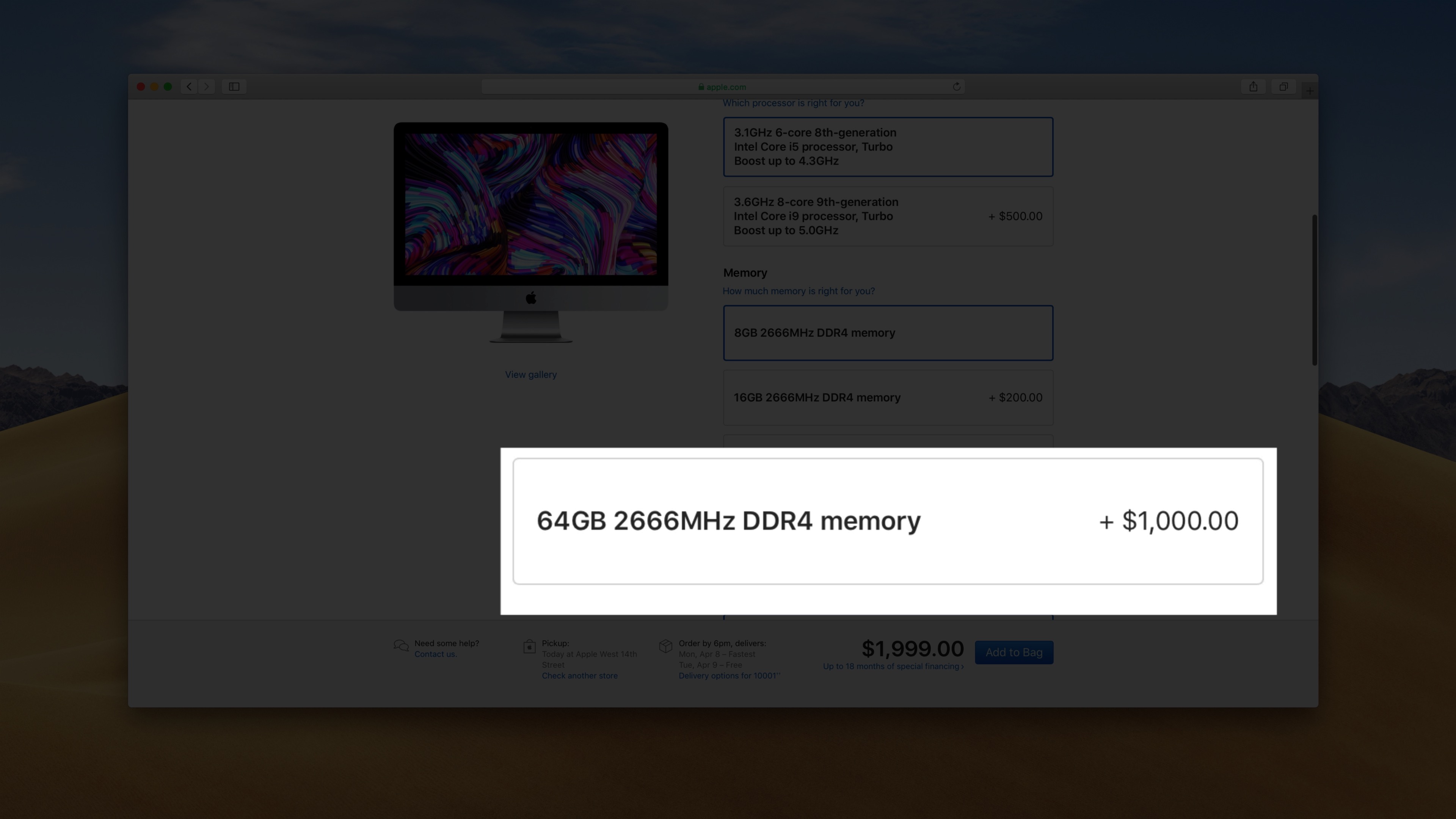 Apple charges a lot of money for RAM upgrades

For the 2019 27-inch 5K iMac, Apple notes that you’ll want to use memory modules that meet the following specifications:

OWC sells various memory configurations that meet the aforementioned criteria. Of course, you don’t have to use OWC memory, but their memory has been verified to work with the 2019 (Model ID 19,1) 27-inch 5K iMac, and it’s backed by a lifetime warranty.

Note: Please be aware that this tutorial is for the 27-inch 5K iMac (2019), 21.5-inch models feature unsoldered RAM, but the memory is not considered to be user-replaceable by Apple. Contact Apple, or an authorized service center to upgrade the RAM on your 21.5-inch iMac (2017+ models only).

Step 1: Power down your 27-inch 5K iMac and unplug all cables from the chassis, including the power cable.

Step 2: Place a soft, non-abrasive towel on a flat surface so that you can rest the 27-inch iMac face down without scratching or causing damage to the display. Be sure that you have plenty of working space. 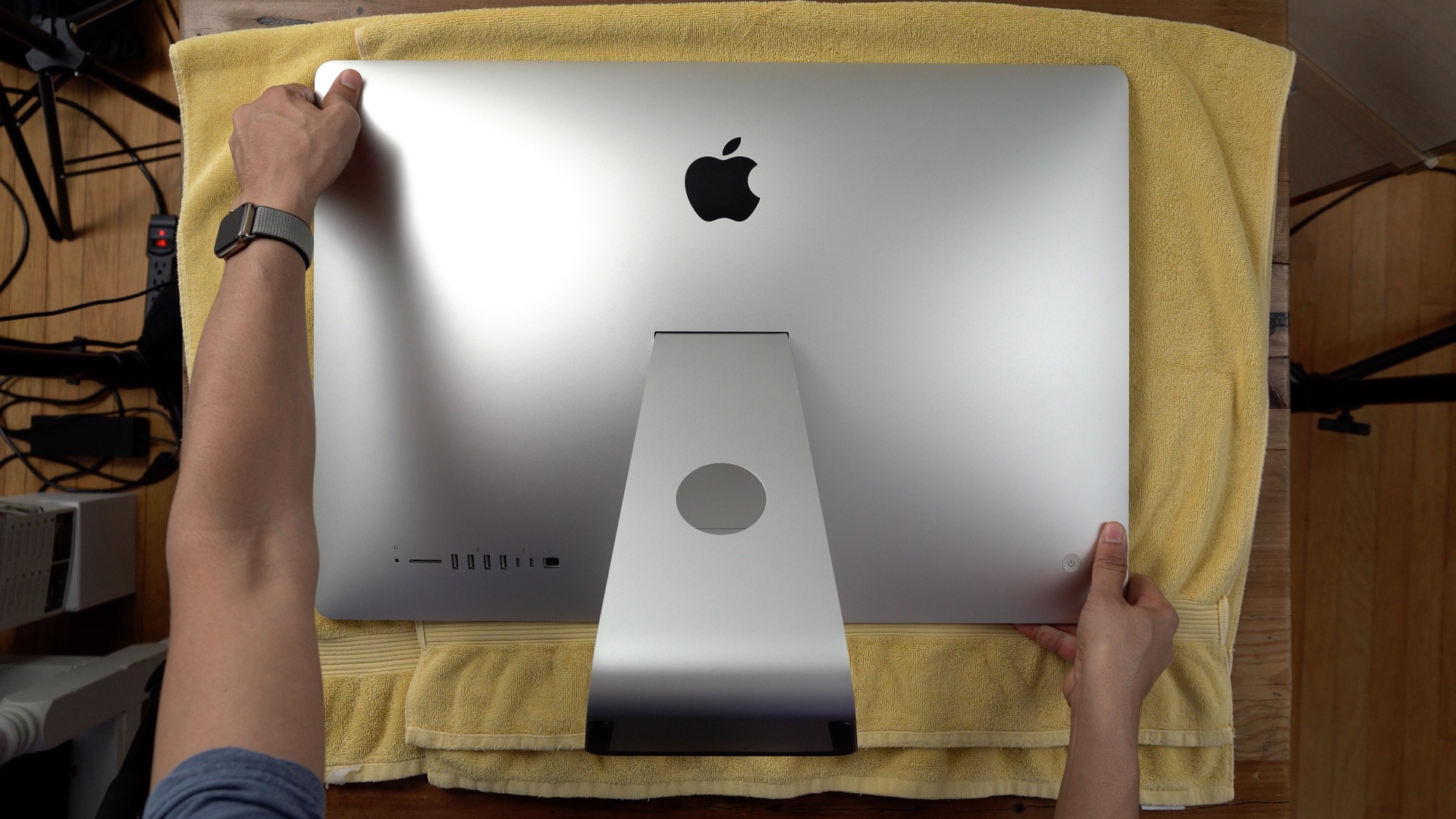 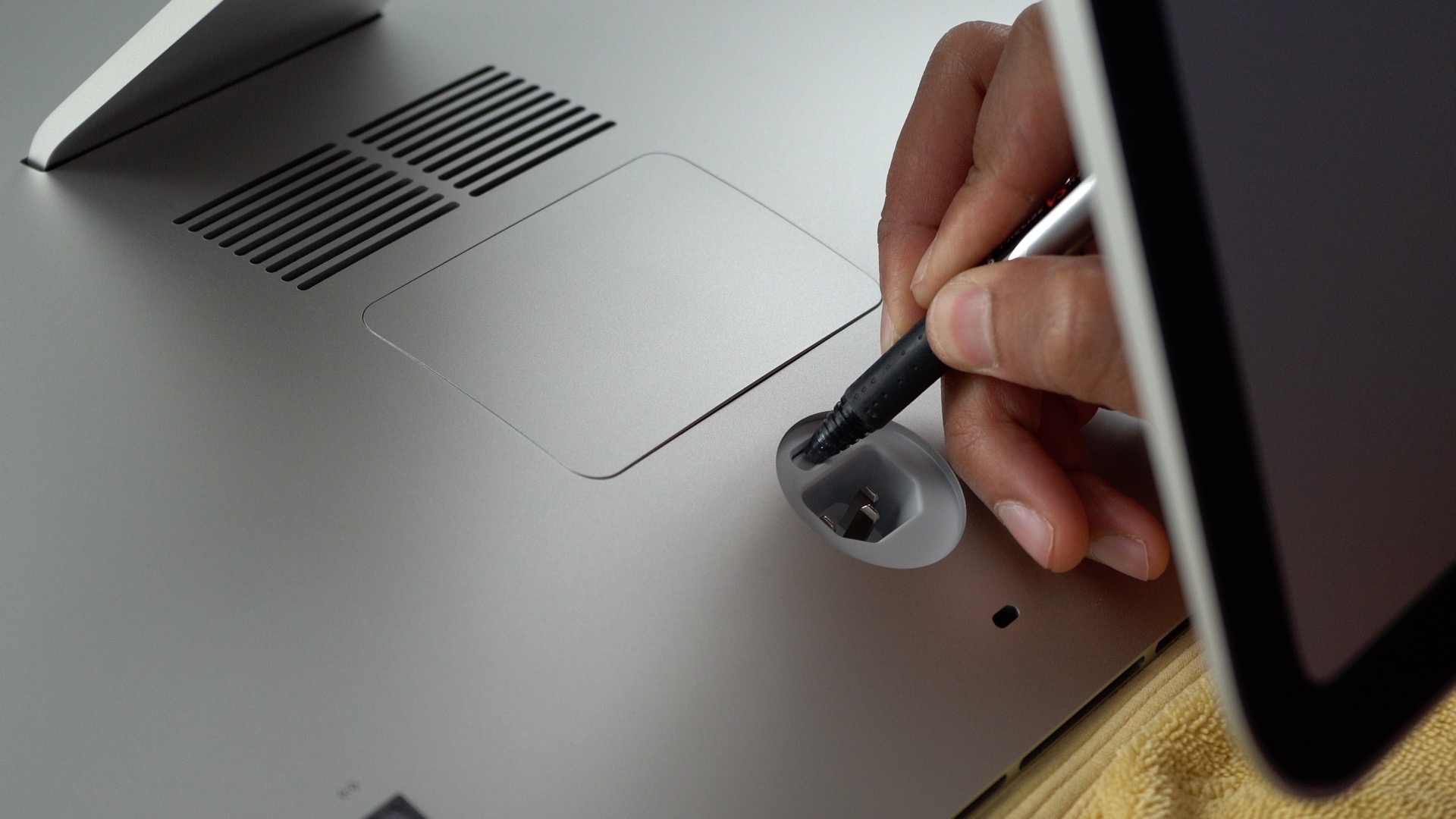 Step 4: Depending on your iMac configuration, there may be two or more SO-DIMM slots in use. Push the levers out to unlock the SO-DIMM slots. 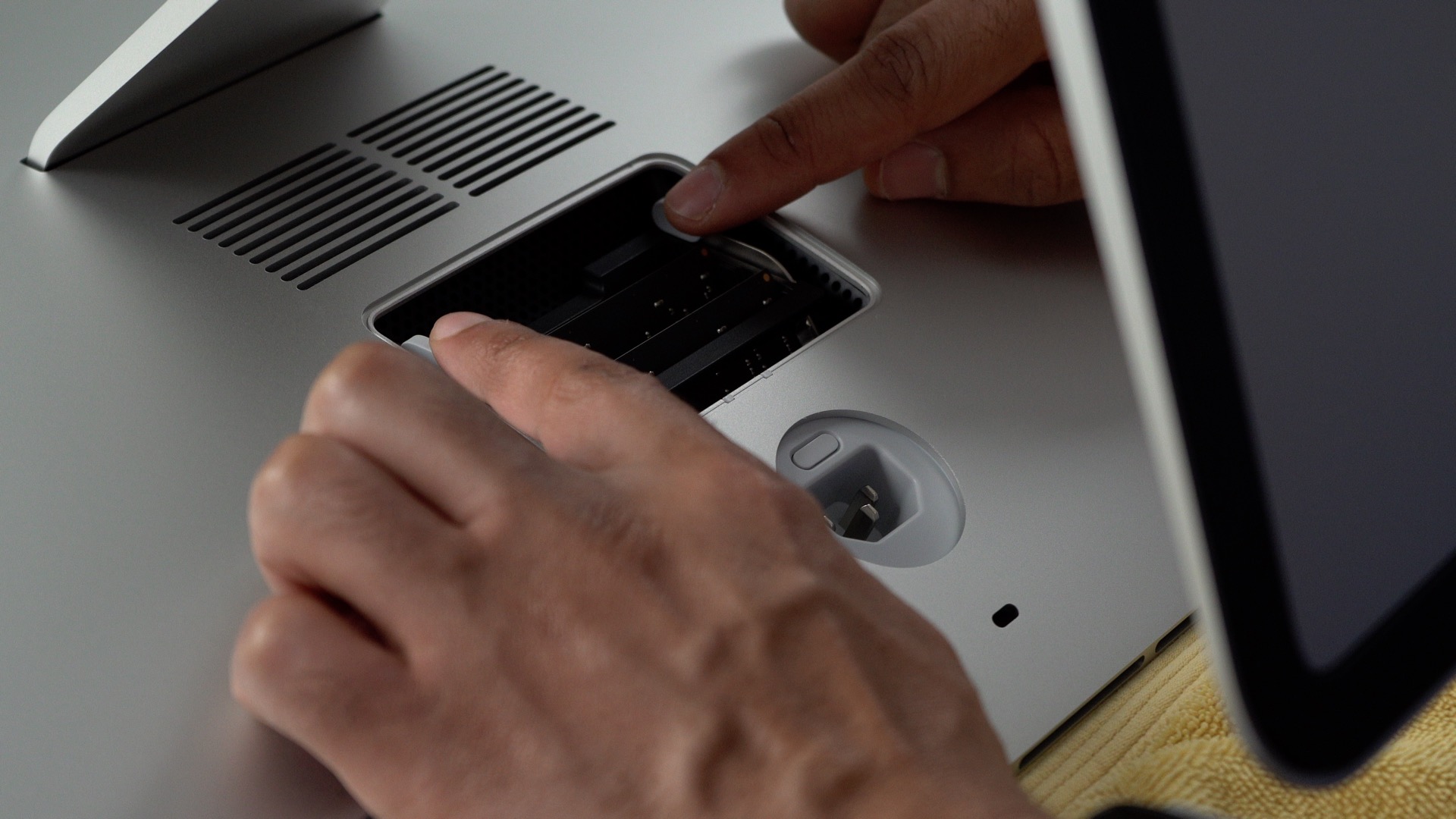 Step 5: If you purchased a package of four SO-DIMM modules, such as in this example when installing 128GB of memory, you’ll need to remove all of the existing modules. If you purchased just two modules, you have the option of keeping the existing pair. Be sure to insert the new modules with the  notch facing towards the left. Push the memory into the slot so that it snaps into place.

If you’re only using two memory modules, such as a 64GB (32GB x 2) configuration, install the modules in pairs in order to take advantage of dual channel memory. In this case, you’ll want to install the pair of RAM modules in the bank 0 and bank 2 or bank 1 and bank 3. 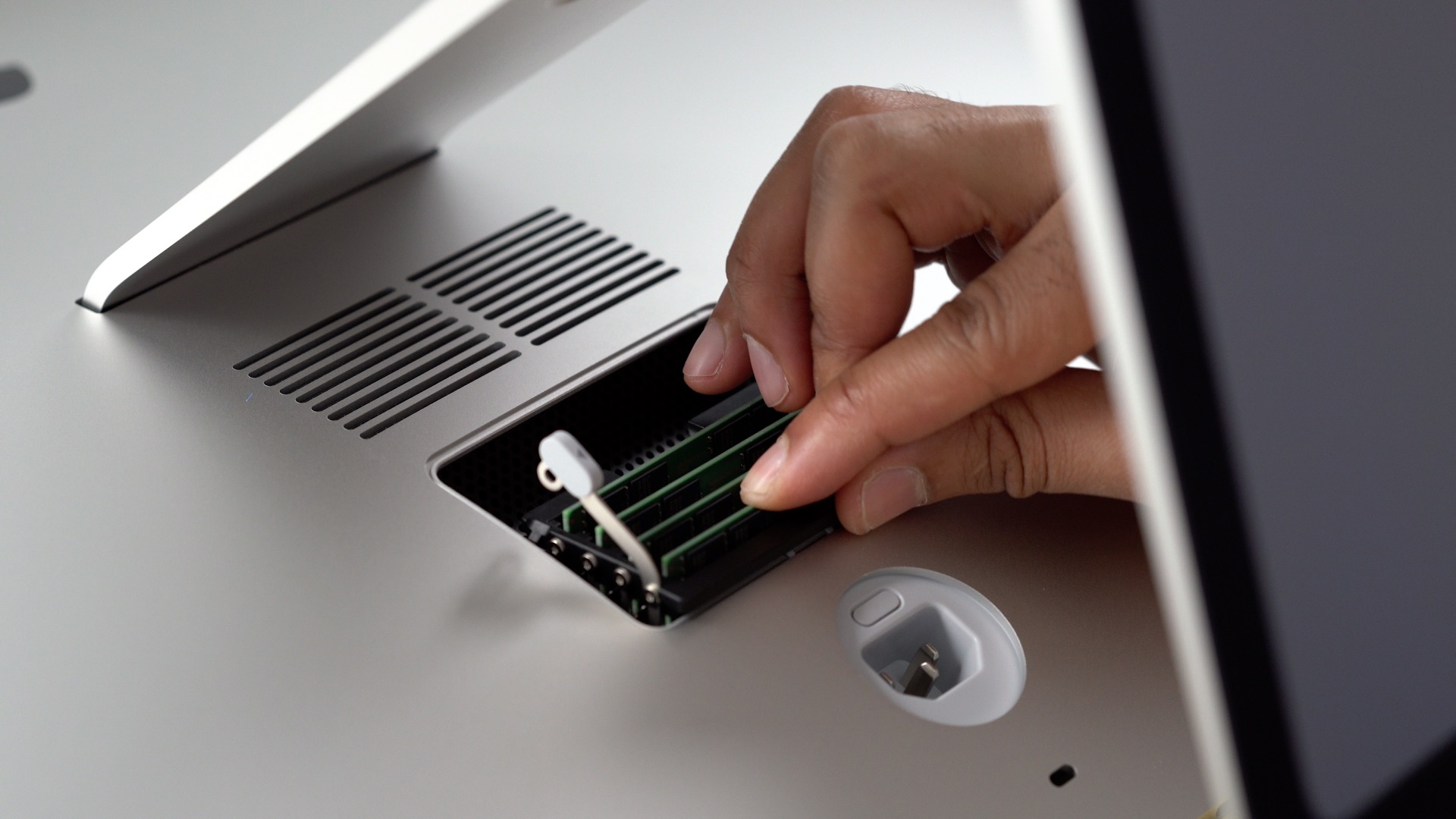 Step 6: Push the levers back down to lock the modules into their SO-DIMM slots. 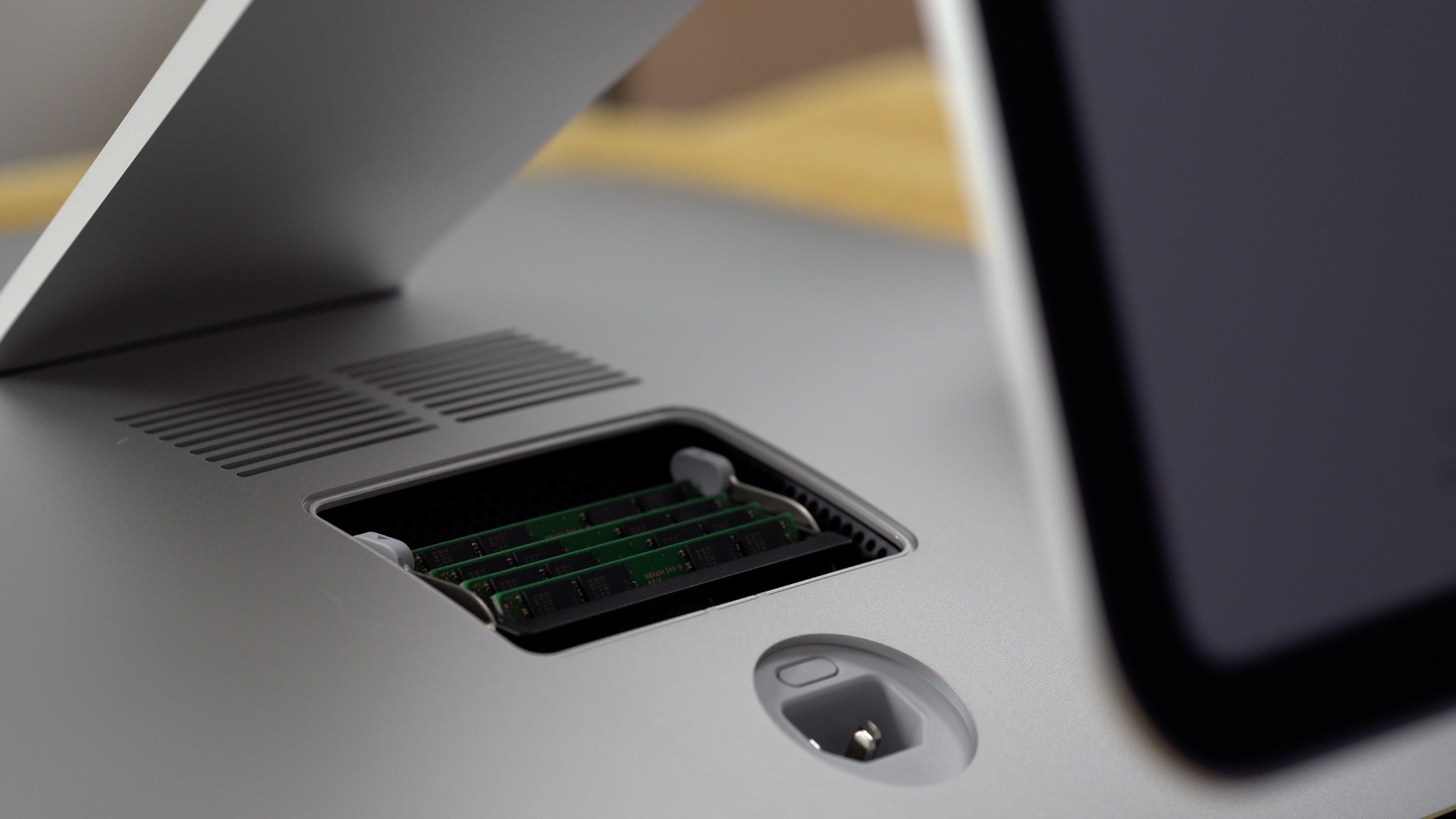 Step 7: Reinstall the RAM slot cover that you removed in step 3. 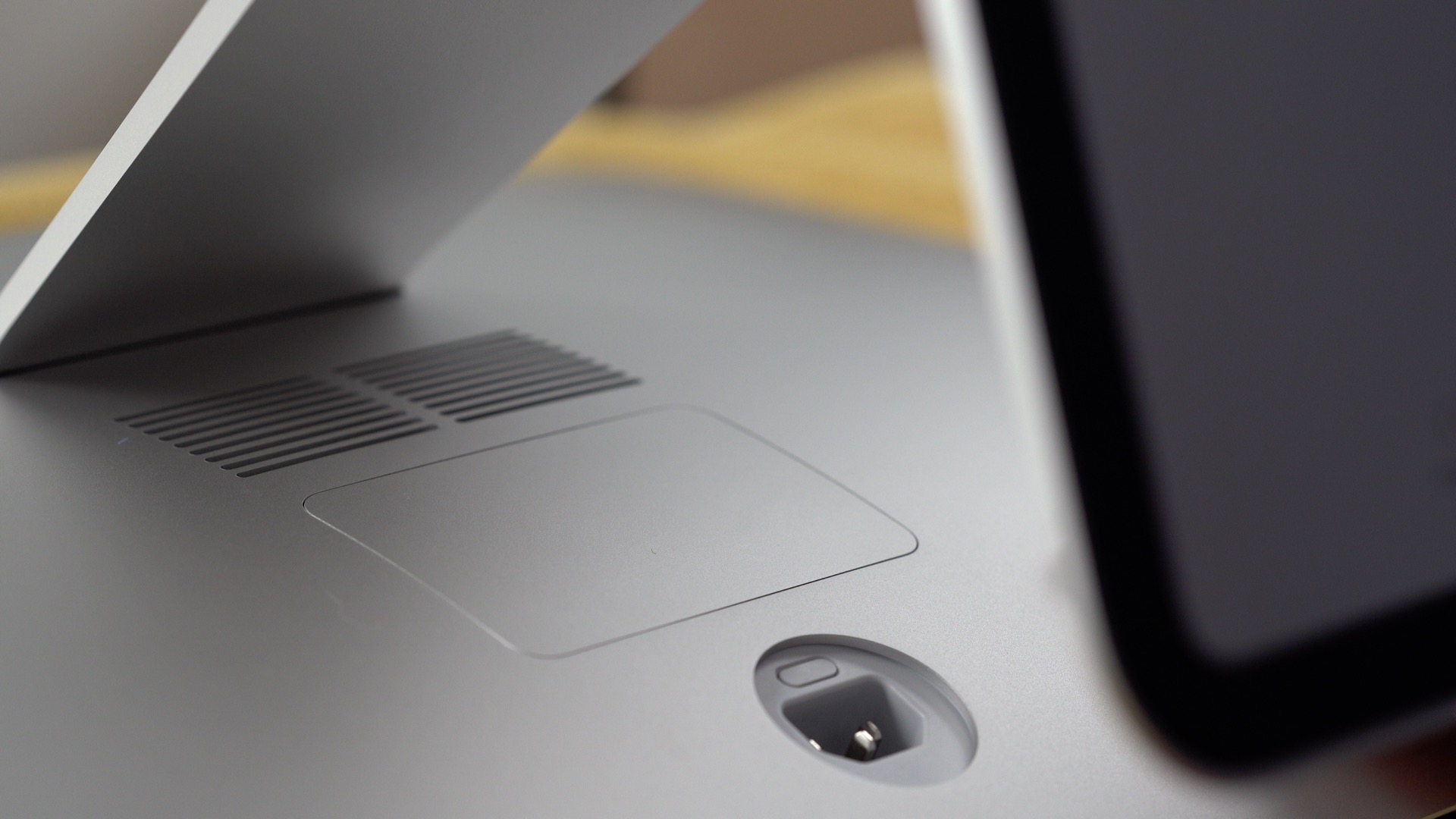 Step 8: Place your 5K iMac back on your desktop, reconnect all cables, and power it on. You may see a black screen for an extended period of time as the new memory is initialized. 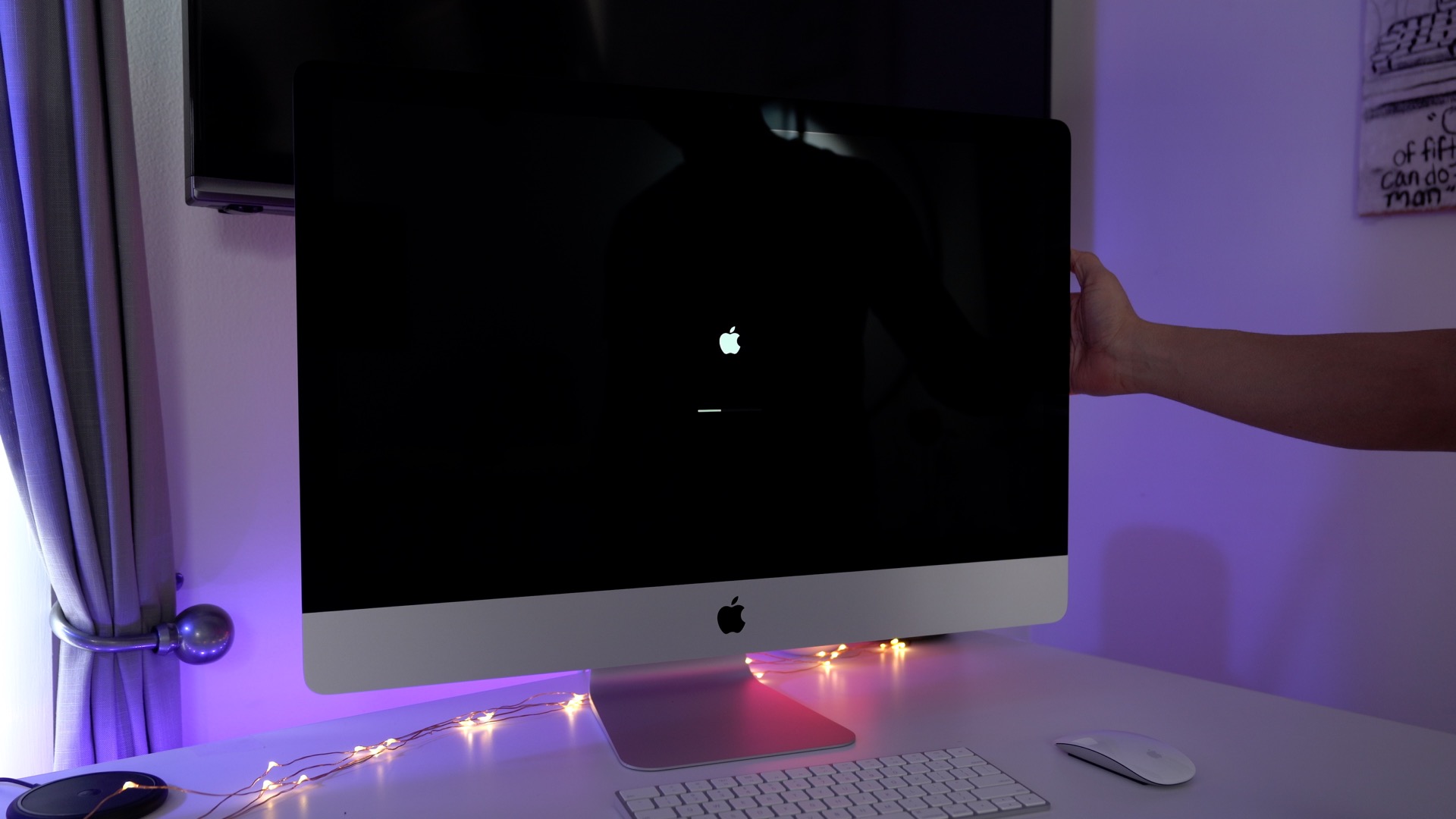 Step 9: Once macOS is booted, go to  → About This Mac → Memory, and make sure that all of the installed RAM is accounted for. 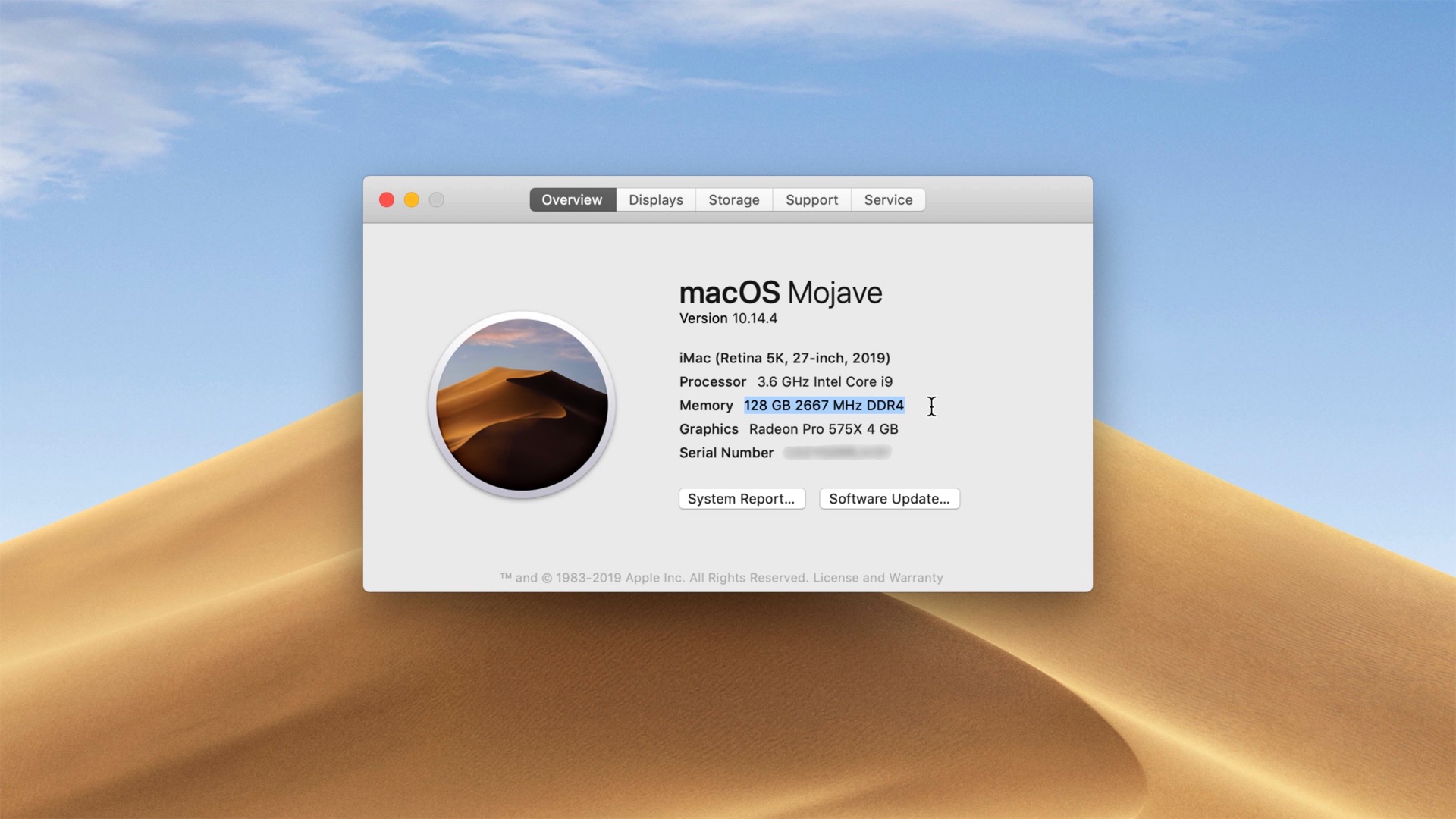 Apple’s memory prices have always been notoriously high, and the new 2019 5K iMac does nothing to change this perception. Users wishing to upgrade to 64GB of RAM, the maximum amount of RAM using Apple’s build-to-order configuration, will have to be prepared to fork over $1000 for the privilege. 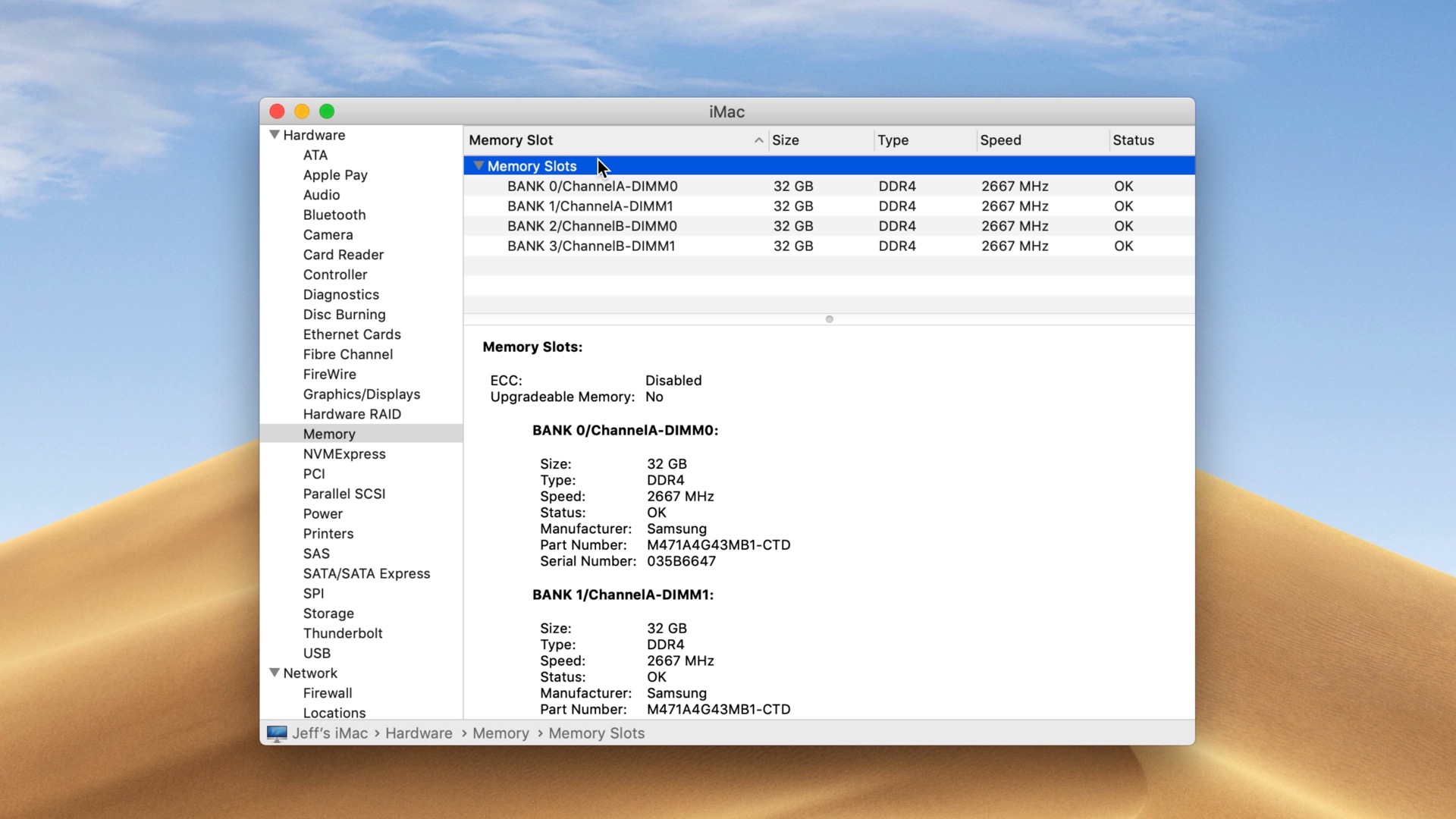 But it’s not just about price. Apple doesn’t even allow users to configure the maximum amount of RAM — 128GB — that the 5K iMac is capable of supporting. Obviously 128GB of RAM is overkill for many users, but those who regularly use memory hungry applications — 3D graphics rendering apps, Google Chrome (hah!), etc. Believe it or not, that much RAM can make a difference for certain workflows, just ask those iMac Pro users who’ve dropped over 5 grand to configure their machines with 256GB of RAM. 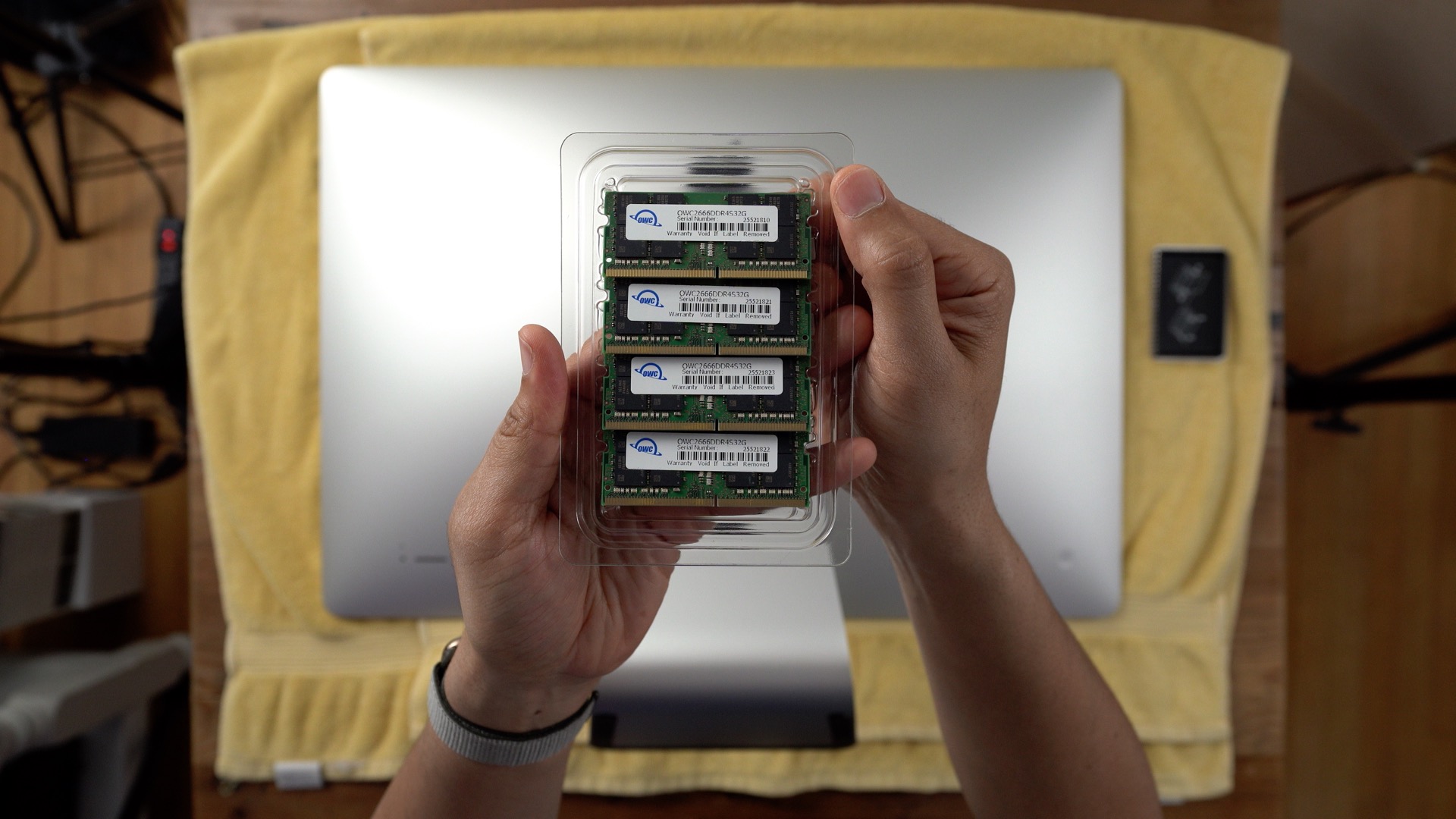 The fact that you can order 128GB of RAM for just $99 more than the cost of half that RAM amount makes it an all the more impressive upgrade. Plus you could always sell the 8GB of base memory included with the 5K iMac if you choose to go that route. You can save lots of money on lesser configurations as well. For instance, 64GB of RAM in a (16GB x 4) configuration costs less than half ($450) of the $1000 that Apple charges.

I always recommend configuring the smallest amount of RAM possible on the 27-inch 5K iMac in order to save money. You can then use the money that you save in order to upgrade the CPU to the high-end 3.6GHz 8-core Intel Core i9, or use it for upgrading the Fusion drive to a faster internal SSD. The great thing about the 5K iMac is that you can always upgrade the RAM later on down the line if you happen to need it.

What do you think? Is it the course of wisdom to go the third-party route when it comes to RAM upgrades? Sound off down below in the comments with your thoughts.