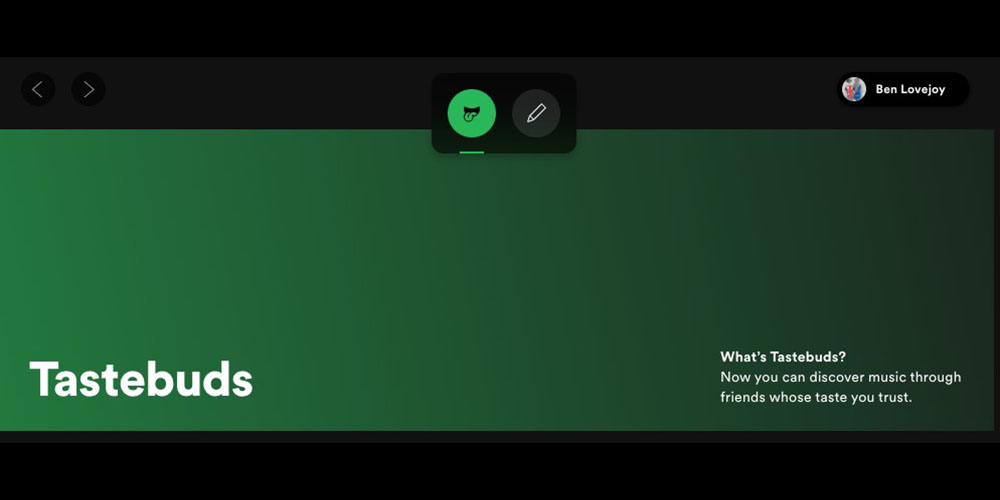 Spotify appears to be replicating Apple Music’s ‘Friends are listening to’ feature under the label Spotify Tastebuds.

Now you can discover music through friends whose taste you trust…

The upcoming feature was discovered by developer and reverse engineering specialist Jane Manchun Wong. She found code describing the feature embedded in the app, and a non-functioning landing page for the feature at https://open.spotify.com/tastebuds.

Wong told TechCrunch a little more about what she’d found.

Users tap the pen icon to “search the people you follow.” From there they can view information about what users have been playing most and easily listen along or add songs to their own library.

This is similar to the Friends Are Listening To playlists found in the For You tab of Apple Music (scroll down the playlists to find it).

As TechCrunch notes, Spotify does have friend features in the desktop app, but not in the mobile one.

On the desktop app, but not mobile or web, you can view a Friend Activity ticker of songs your Facebook friends are currently listening to. Or you can search for specific users and follow them or view playlists they’ve made public, though Spotify doesn’t promote user search much […]

The result is that you can only see either a myopic snapshot of friends’ current songs, the few and often outdated playlists they manually made public or you message them songs elsewhere. There was no great way to get a holistic view of what a friend has been jamming to lately, or their music preferences overall.

It has also experimented with other social features but not yet launched them.

Those include a Friends Weekly playlist spotted last year by The Verge’s Dani Deahl. Then this May, we reported Wong had spotted a shared-queue Social Listening feature that let you and friends play songs simultaneously while apart.

If Spotify Tastebuds does launch, it’s likely the company will adopt the same approach as Apple Music in seeking your permission before a friend can follow you.

If you want to know what you’ve been listening to throughout the year, Apple Music Replay and Spotify Wrapped let you see your most listened-to music.