After the iPhone, Apple patent imagines the iMac as a single slab of glass 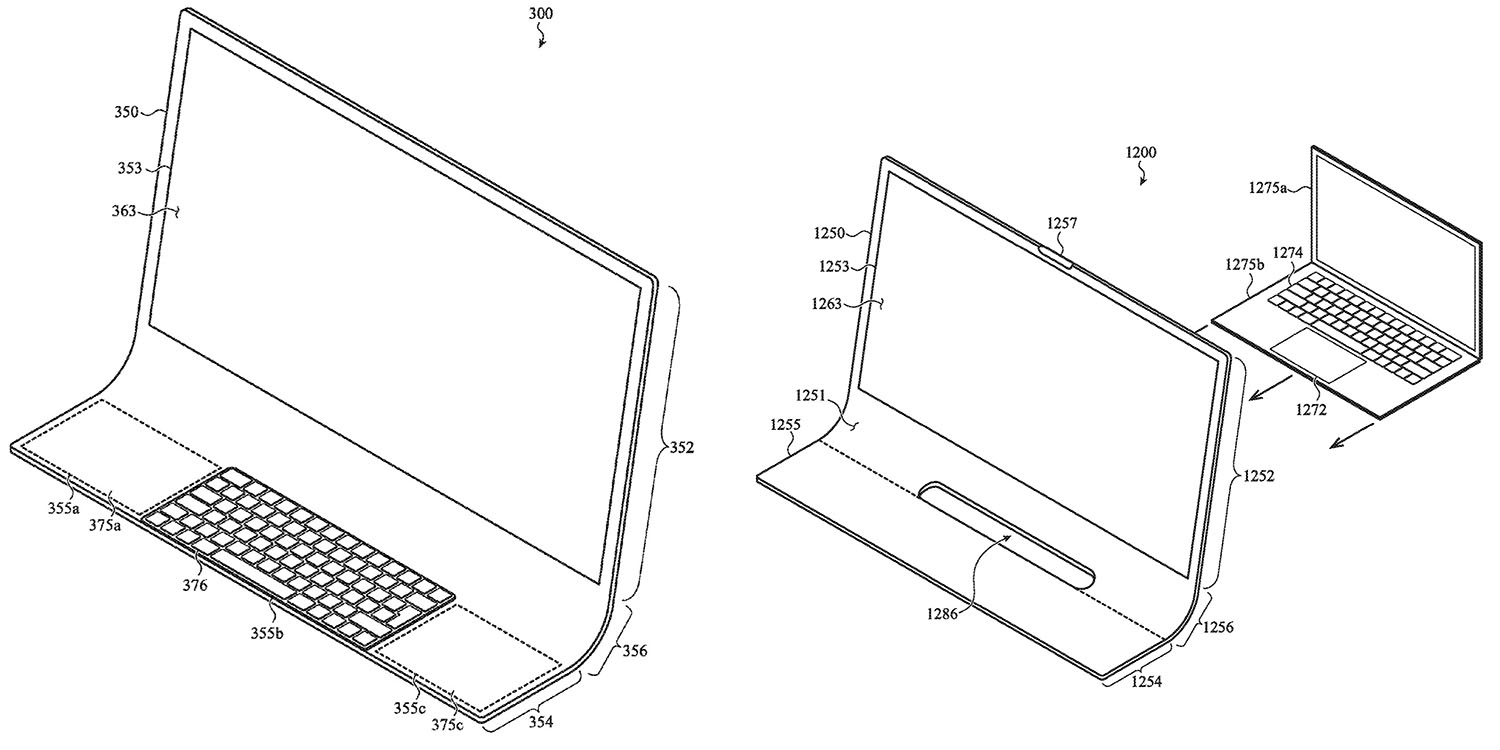 Apple is growing ever closer to its reported ambition to design the iPhone as a single slab of glass, but a new patent application suggests as least some designers in the company share the same ambition for the iMac.

One funky variant even shows how it could allow the MacBook Pro to dock with the iMac, a design that could potentially work for a future Apple display too…

As is usual with Apple patents, it is drafted in the broadest possible terms and allows for either a physical keyboard and trackpad(s) or virtual ones.

Keyboard inputs may include touch inputs received at mechanical keys (e.g., keys of a mechanical keyboard) and/or a keyless surface of a virtual keyboard provided in the input area.

For example, the input area may be positioned along a part of the lower portion to define a touchscreen-style display for use as a keyboard and/or trackpad.

We say ‘trackpad(s)’ as one design shows dual trackpads, one either side of the keyboard.

One option even includes a slot in the glass. A MacBook could be placed behind the iMac, and then the keyboard pushed through the slot to emerge in the front. Perhaps the processing power of the two machines could be combined, in a similar fashion to using an external GPU today.

We always caution that Apple patents all kinds of things that never make it to market, and this one feel like one of those concept cars shown at shows by vehicle manufacturers: a chance to let the designers go crazy in the hope that it might spur one or two ideas that filter down to production vehicles in vastly diluted form.

At the same time, there’s little here that wouldn’t be practical at some point. Curved glass is now commonplace in smartphones; virtual keyboards may be horrible flat things at present, but Apple already has convincing-feeling haptics for simple buttons and trackpads, so it’s not hard to imagine that it could one day create a realistic-feeling glass keyboard. The key challenge here is enabling touch-typists to feel the edge of the virtual keys when at rest, and Apple has patents for that. A version with a physical keyboard and trackpad(s) would be practical far sooner.

Is a curved iMac design something you’d like to see in the future? Would you like to see Apple eventually go as far as a single slab of glass? Let us know your thoughts in the comments.