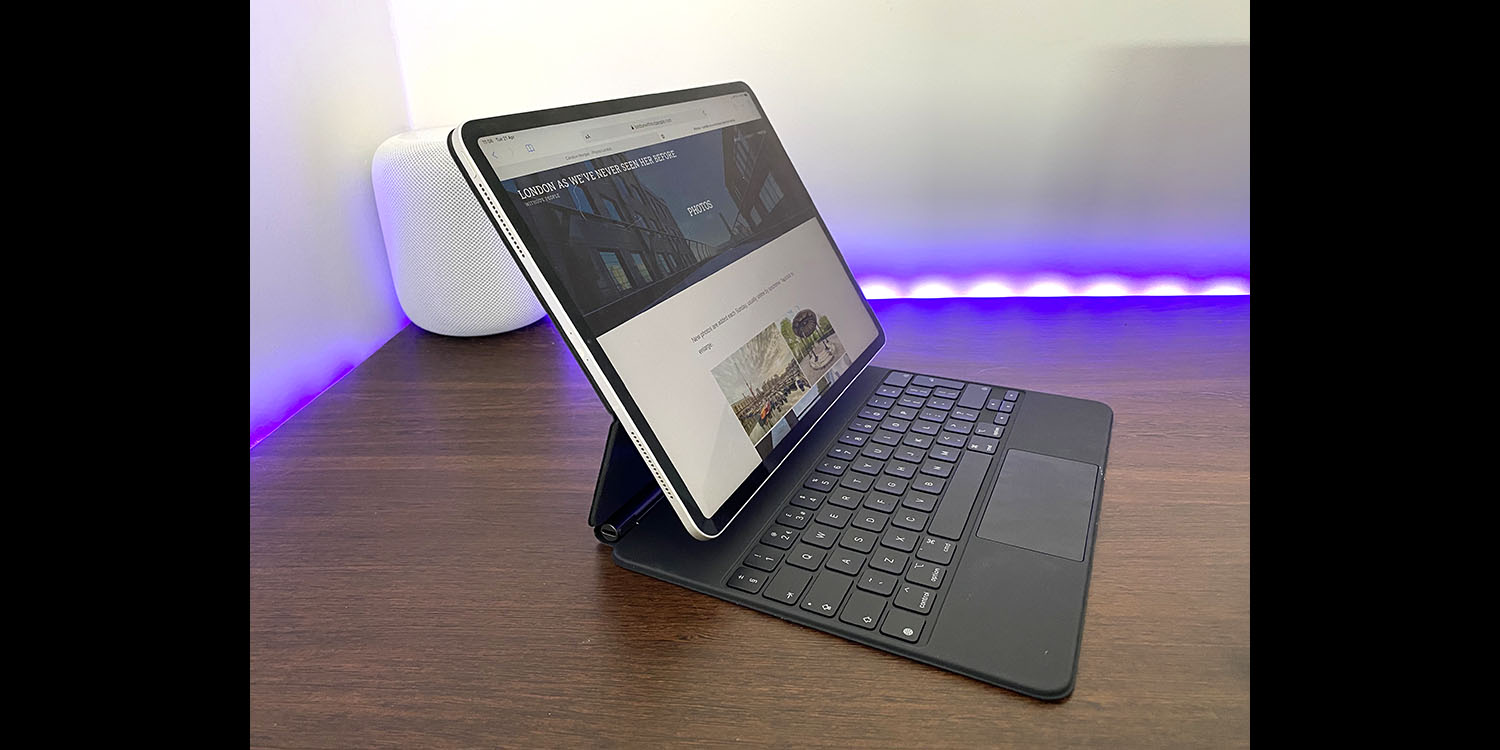 I guess first impressions of the Magic Keyboard with trackpad can be thought of as layered. There’s the ordering experience, otherwise known as: did I really just pay £349* – more than the price of the entry-level iPad – for a keyboard?

*Usual reminder: In the UK, VAT (sales tax) is included in the list price. So the UK price is £291 without sales tax, which is the equivalent of $359. This compares with a US price of $349, to which sales tax needs to be added.

Then there’s the set up experience …

I’m getting to this before the look-and-feel because there is no set up.

But this is next level: attach your iPad to your keyboard and immediately begin using it. Skip setup altogether.

Open it, and it wakes, just as the MacBook would. Or, if it’s already open, hit the spacebar to wake it from sleep, just as I would my MacBook. Swipe up on the trackpad and it unlocks. Open an app and begin typing.

That’s it. Straight out of the box.

I’ve never been a great fan of Apple’s polyurethane for cases and covers. In the past, I used to go for the leather Smart Covers before those were discontinued, and I’d ideally prefer to see this in leather.

I mean, the material is inoffensive enough, it just doesn’t look stylish or feel premium. And for this price, it really should.

Opening it, the lower hinge snaps into place with a satisfying feel. The upper hinge is also really solid, allowing the angle to be adjusted easily. Once it is, the iPad stays exactly where you put it.

The magnetic connection is incredibly strong! Way more than the normal Smart Cover. Once attached, it really does feel exactly like a single unit. I immediately felt comfortable carrying it around by the keyboard.

Indeed, I held it upside-down by the keyboard, and even did it above my desk, because it was immediately apparent that the connection is that strong.

Much has been made of the fact that the combination of 12.9-inch iPad Pro and Magic Keyboard actually weighs more than the 13-inch MacBook Air.

Many have been voicing that as a criticism, but I’m not sure it really is. First, if you want a keyboard – any keyboard – to support the weight of an iPad without being propped up at the back, then the base has to be heavy enough to stop it falling over backward.

Second, the implication of the criticism is that this is ‘only’ an iPad compared to a MacBook. I don’t personally see it like that. To me, they are different devices, with different strengths and weaknesses. With a keyboard, there is overlap in their uses, but they are not – to me – competing devices, and I don’t see the iPad as the lesser machine.

I’m perhaps also influenced by the fact that I have the 16-inch MacBook Pro, so am used to carrying a heavier device.

Would I like the iPad/Magic Keyboard combo to be lighter if it were possible? Of course. But do I see the weight as either unreasonable or problematic? No. 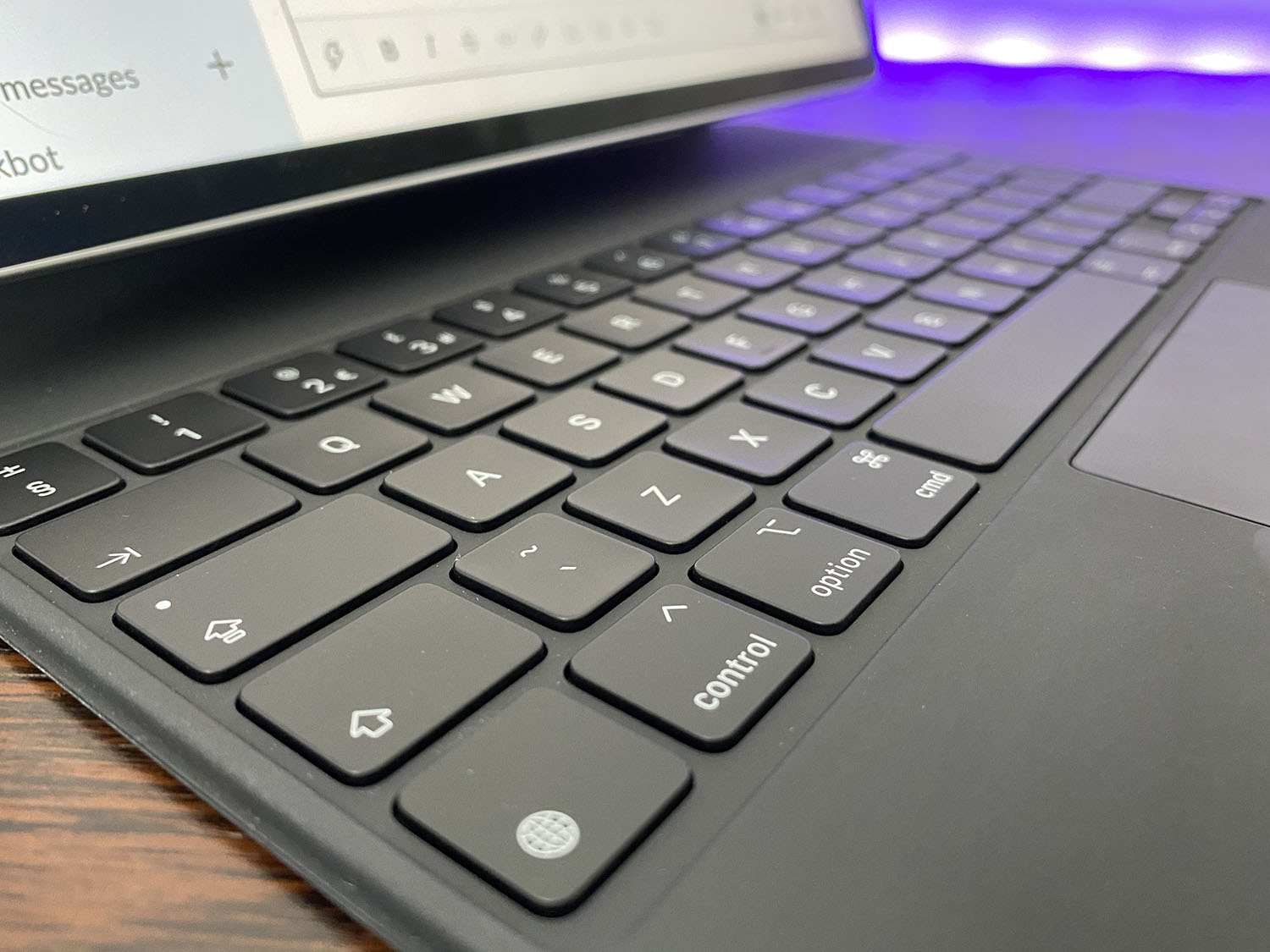 Some early recipients and reviewers described it as exactly like the 16-inch MacBook Pro keyboard. I disagree.

It’s similar in feel, but definitely not the same. The iPad Magic Keyboard has a noticeably lighter spring action. I would say it offers perhaps 70-80% of the resistance of the MBP one.

The travel depth does, however, feel exactly the same. The keys themselves feel just as solid, moving as a single unit, with no wobble if you hit them at the edge.

I’m sure someone will do the exact measurements, but it seems to have the same dimensions, the same size keycaps and the same spacing between the keys.

I’d ideally like it to feel identical to the MacBook Pro, but it’s certainly very close. It’s a great typing experience.

On the lap, it’s not quite so good. Apple has set the maximum hinge angle so that it remains stable on a flat surface. On my lap, it depends where I sit, as the angle of my legs varies on the seat. On a sofa, with a laid-back position, it’s very solid. On an armchair with a more upright position, it is a little less stable. But I give it 8/10 for the lap typing experience, which is about what I give the Brydge – which is to say, I think that’s realistically as good as you can expect without a much larger base.

This transforms the experience of writing and editing on the iPad.

Overall, the Magic Keyboard and iOS 13.4 immediately makes the iPad feel like a laptop. It just feels instinctively right to use the trackpad rather than the touchscreen for most things in this setup, but writing and editing is where it shines.

Editing on a touchscreen-only device is a real pain. It’s really awkward to select text, especially if you want to position the cursor mid-word to correct a spelling error. The spacebar long-hold to convert the keyboard to a virtual trackpad helps, but it’s still a clunky experience, and is the main reason I prefer a laptop to my iPad for writing long-form pieces.

But with the Magic Trackpad, editing is exactly like it is on a MacBook: simple, fast, precise.

I’ll need more use to see how much difference it makes that the trackpad is significantly smaller than on a MacBook, but my initial impressions are that it makes less difference than I’d expected.

One thing I love: Apple has implemented tap-to-click! This is the first setting I change on any MacBook, as it just feels unnecessarily forceful to physically (or haptically) click. I didn’t expect Apple to implement this for the iPad, but it has.

I’ll need to learn all the trackpad gestures, as they are not identical to macOS, but the ones I’ve used so far feel very natural. Swipe up for Home mirrors the touchscreen gesture, albeit you need to use three fingers. I’ll report back on gestures next time.

Let’s get the elephant in the room out of the way first: this is insanely expensive for a keyboard.

All the same, I think there is very little doubt that I’ll be keeping it.

The ease of separating the iPad from the keyboard is the single biggest selling-point to me, compared to the Brydge. It’s also easier to open and close: with the Brydge, you always have to be a little careful doing this as it can be easy to accidentally pull the iPad out of the clamps. With the Magic Keyboard, it’s still a two-handed operation for reasons well-explained by John Gruber (tl;dr the iPad is so heavy that you need to hold down the keyboard to prise it open, in contrast to a laptop where most of the weight is in the base), but it’s definitely an easier operation.

Normally, the real test would be mobile use. How does it feel when carrying it around, using it on the tube, setting up in a coffee shop and so on? The lockdown has put paid to that idea.

So the closest I’m going to get is how it feels carrying it around the apartment, and switching between uses at home. Sitting on the sofa typing, then removing it to use as a pure tablet. Carrying it to the bedroom, then detaching to use the iPad as an eBook reader. That kind of thing.

I’m fully expecting my next diary piece to simply report back on the trackpad gestures and confirm that I’m keeping it, but we shall see!

How about you? If yours has arrived, please share your own first impressions in the comments.