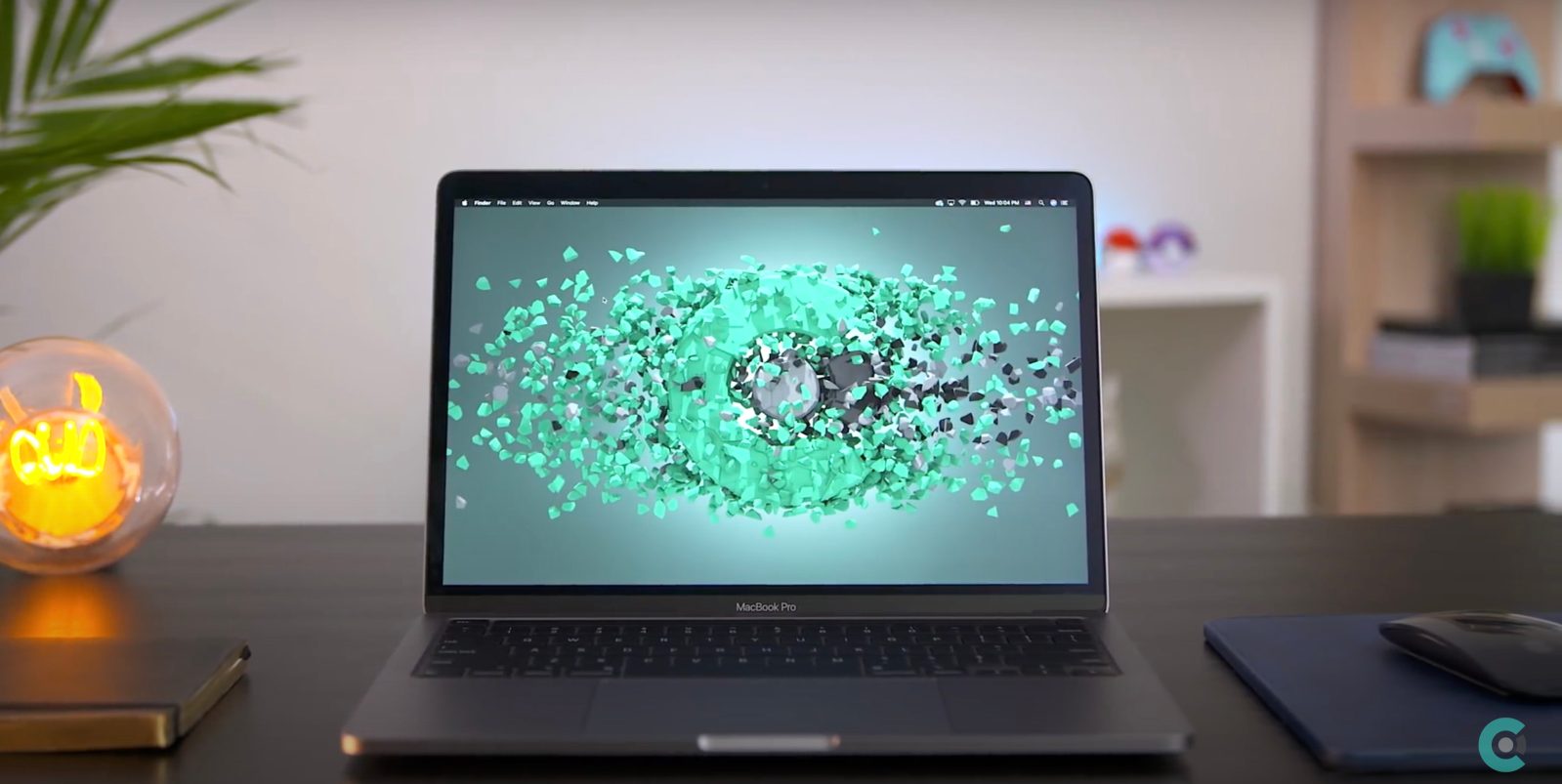 The 2020 13-inch MacBook Pro has arrived and we’re seeing the first reviews land today taking a closer look at Apple’s latest notebook with the reliable Magic Keyboard. No surprises overall but take a look below as The Verge, TechCrunch, Engadget, Jason Snell, MKBHD, and UrAvgConsumer highlight why the new 13-inch MacBook Pro is a “strong and safe bet” and also the “awkward middle child” of the MacBook lineup.

The three big changes for the 13-inch MacBook Pro include the long-awaited switch from the butterfly keyboard to the scissor switch Magic Keyboard, double the base storage (now 256GB), and 10th gen Intel processors in the higher-end models that start at $1,799.

And that’s the bottom line: by all indications, Apple has delivered an update to the 13-inch MacBook Pro that does the things most people would expect a good laptop to do. First and foremost, the keyboard is expected to be trustworthy. It’s always possible that there’s a critical flaw nobody has caught yet. But I think it’s safe to trust this Magic Keyboard — and this MacBook.

TechCrunch detailed how good it is to see the Magic Keyboard arrive on the new MacBook Pro but also notes that one downside is how the 2020 MacBook Air complicates matters. All in all though, TC calls the 13-inch MacBook Pro a “strong and safe bet.”

Again, the biggest drawback of the 13-inch Pro is that the improved Air blurs the product lines in a number of ways. But that device is thinner, lighter and $300 cheaper. The case for choosing the pricier device isn’t as clear as, say, the decision between the 13-inch and 16-inch models.

For most users, the Air should be plenty for most tasks. For those who need more power without breaking their backs or banks, however, the 13-inch model is still a strong and safe bet that’s now much easier on the fingers.

In closing out his review, MKBHD highlights questions linger about a 14-inch MacBook Pro and that we could see Apple’s first ARM MacBook before long.

Engadget says it’s “easier to recommend” and thinks there’s enough of a difference to differentiate the 13-inch Pro from the Air. And like others, the biggest thing to be happy about is the Magic Keyboard.

The new 13-inch MacBook addresses one of our biggest complaints with the last-gen model: the frustrating typing experience. Now, the smaller MBP is that much easier to recommend, with the Retina display, speakers, touchpad, battery life and overall performance rounding out the mix. There’s also enough performance clout here that it’s clear why someone would choose this over the similarly sized MacBook Air.

YouTuber UrAvgConsumer highlights that the 13-inch MacBook Pro is another choice for users to consider when figuring out the right balance of portability and power. But again, he notes that if you really value/need power, you’ll likely want to look at the 16-inch MacBook Pro and if you’re looking for portability for general use, the MacBook Air is likely the best bet.

This isn’t an enormous upgrade over last year’s model, but it’s a measurable one. (And, of course, the keyboard is the spec most likely to draw upgrades from owners of more recent models.) And if you’ve been holding on to a 2015 MacBook Pro waiting to upgrade, you’re in for a very nice boost.

He’s also got a nice comparison graph after running some test on the higher-end model that Apple gave him: 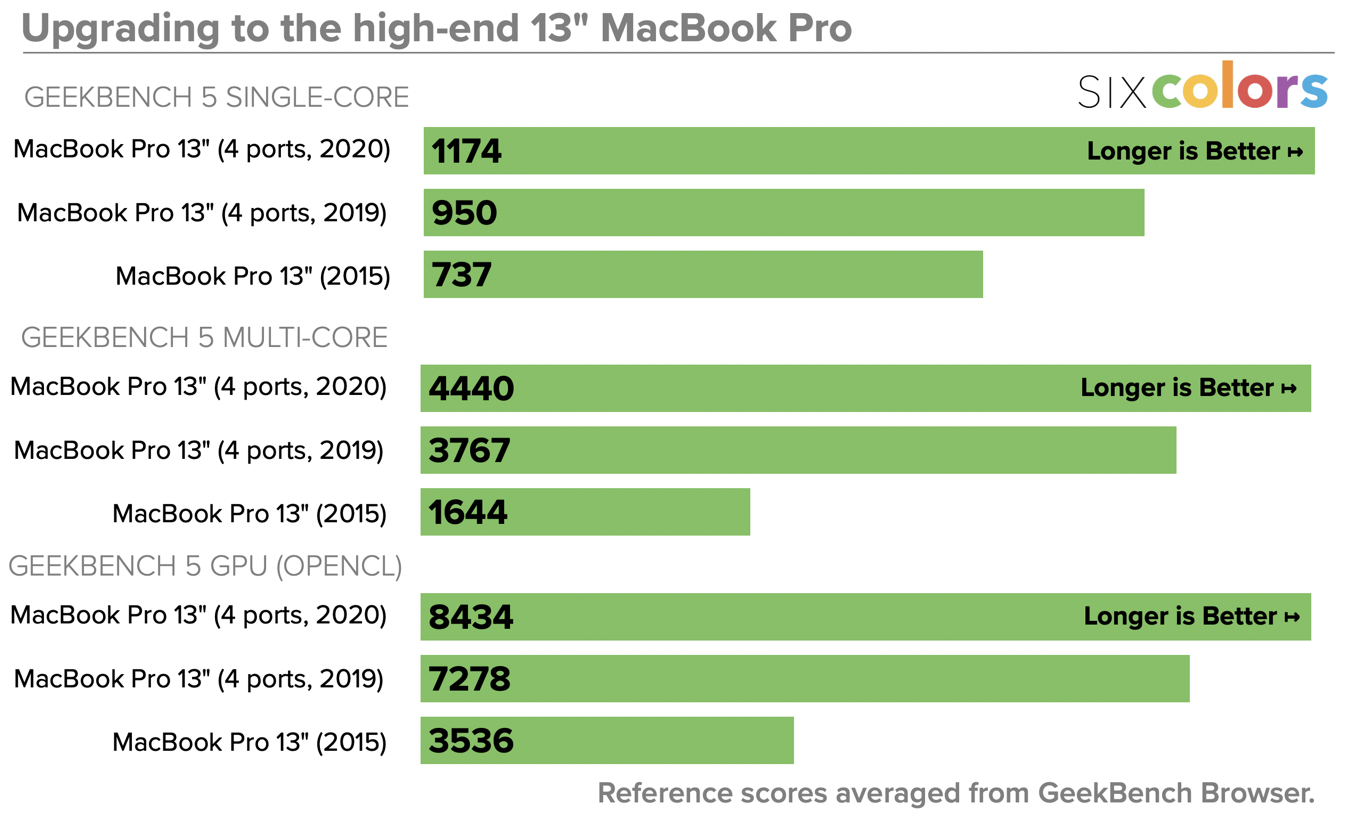 In my tests the new high-end model was definitely faster than last year’s high-end model, across the board. Though Apple claims that graphics performance should receive an extra boost in this upgrade (when compared to last year’s model), the Geekbench 5 scores only showed improvement in line with the general CPU performance. This may be an artifact of Geekbench itself; as I don’t have the previous model to test in graphics-intensive apps like Final Cut Pro X or games, I can’t speak to that.