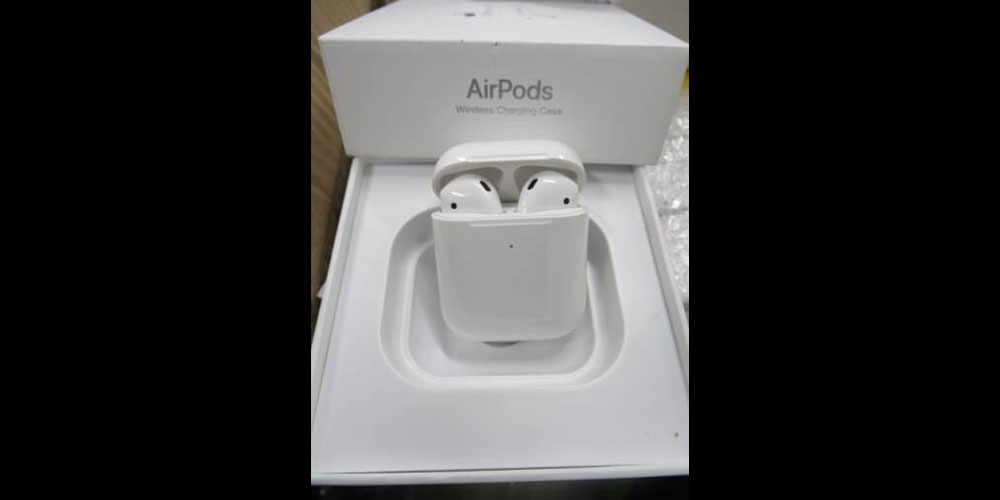 A package from China whose paperwork described the contents as lithium ion batteries was actually found to contain fake AirPods, when checked by US Customs and Border Protection officers …

The CBP says that the poor quality of the packaging was the giveaway.

The parcel was manifested as “Lithium Ion Batteries”. CBP officers inspected the package for information related to admissibility of it contents in accordance with agency procedures. It was during this inspection officers noticed the quality of the packaging and marking on the items were not consistent with the quality of a legitimate product.

Once their suspicions were confirmed, likely by sending photos to Apple, the fake AirPods were formally seized and destroyed.

This catch, earlier this month, was a small one, comprising just 25 units with a retail value of $4,000. But the scale of counterfeit goods seized by CBP is huge. The agency said that it last year averaged more than four million dollars worth of fake product seizures daily.

On a typical day in 2019, CBP officers seized $4.3 million worth of products with Intellectual Property Rights violations. Learn more about what CBP did during “A Typical Day” in 2019.

CBP officers and Homeland Security Investigation (HSI) agents seized 27,599 shipments containing counterfeit goods in Fiscal Year (FY) 2019, down from 33,810 seizures in FY 2018. However, the total estimated manufacturer’s suggested retail price (MSRP) of the seized goods, had they been genuine, increased to over $1.5 billion from nearly $1.4 billion in FY 2018 […]

Unsurprisingly, mainland China and Hong Kong account for more than 90% of the value of counterfeit goods seized. Operations are often carried out on a very large scale, and it’s likely these AirPods were sent in small batches to reduce the likelihood of inspection.