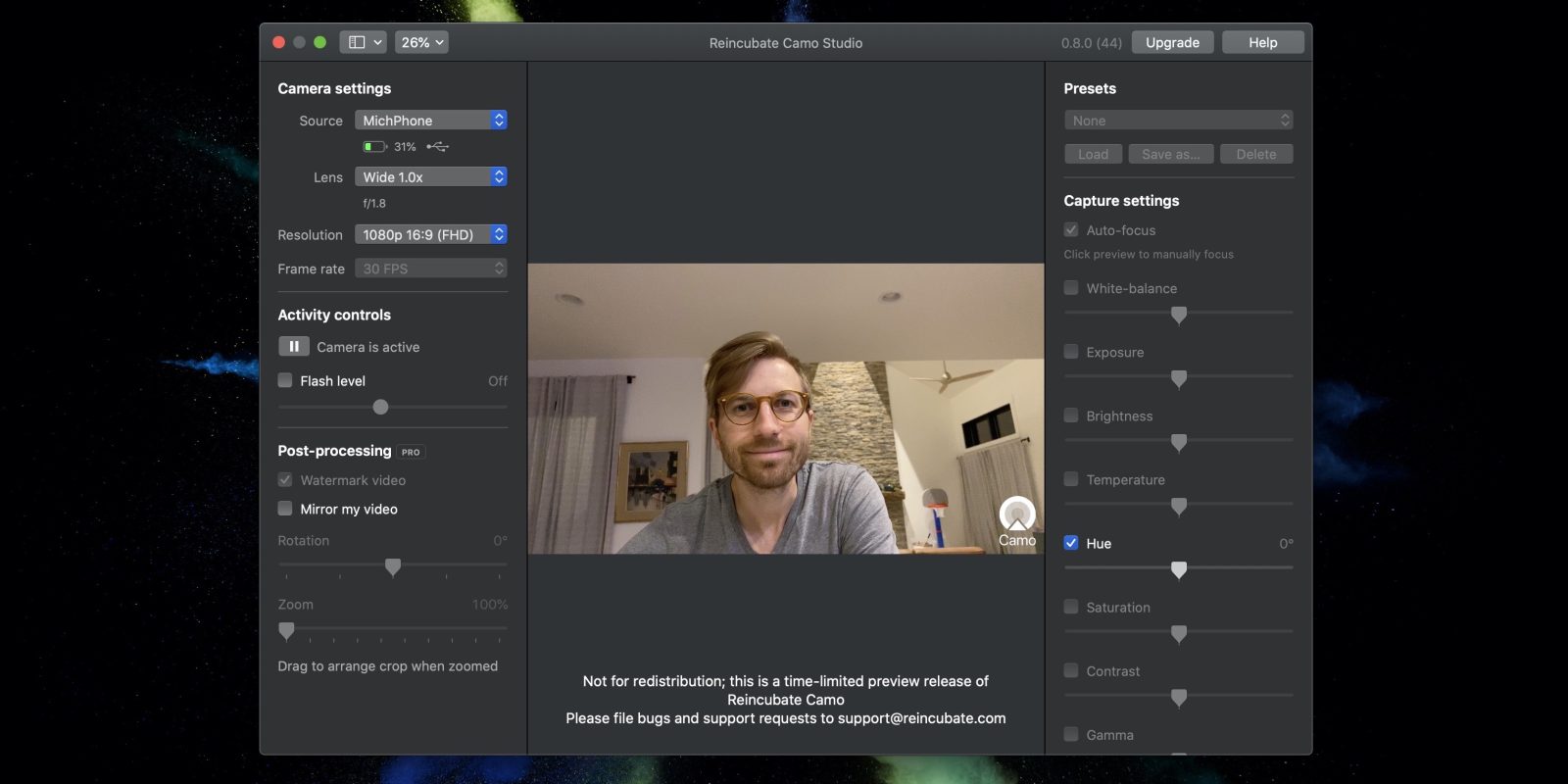 Video calls have become a necessity for many during the pandemic and one of the things we’ve all noticed more than ever is how bad the 720p resolution built-in FaceTime camera picture quality is with Apple’s MacBooks. Now a new app called Reincubate Camo is out today that lets iPhone, iPad, and iPod touch users use the devices as 1080p Mac webcams for video calls with Zoom, Google Meet, Microsoft Teams, and Cisco Webex. It comes with lots of granular control and an easy to use design. Read on for a hands-on look at the new software.

We’ve seen various camera makers like Canon, Fujifilm, and GoPro release software to allow their cameras to be used as Mac Webcams. That has certainly been useful for some but support has been limited to certain camera models from certain manufacturers.

How about the best camera you have available? For many, it’s the iPhone, and Reincubate’s Camo app leverages the great cameras in Apple’s smartphones, iPads, and the iPod touch as an easy way to seriously improve your video call quality. Camo isn’t the first app to tackle this, but it’s done so in a thoughtful and very well-executed way.

Camo is made up of an iOS app and a Mac app that’s super simple to install and setup. It features a much-improved 1080p webcam experience over the built-in 720p Mac FaceTime cameras with the default settings but goes way beyond that with granular controls too.

Reincubate Camo in use

I’ve been testing out the beta version of Camo for a bit now and here’s what I’ve experienced.

Once you download Reincubate Camo on your iOS device and launch it, you get a simple splash screen that walks you through downloading Camo Studio for Mac (option to download from iPhone and AirDrop to Mac which is super slick!).

When you’ve installed Camo Studio on your Mac, you just need to plug in your iPhone, iPad, or iPod touch with a Lightning cable and you’re ready to go.

With the Camo Studio app you can roll with the default settings, a preset you’ve created, or fine-tune your video settings manually. That includes choosing your lens and resolution, and with the pro version the frame rate, zoom, white-balance, exposure, brightness, temperature, hue, saturation, contrast, gamma, and sharpness.

Here’s how the Camo Studio app on Mac looks: 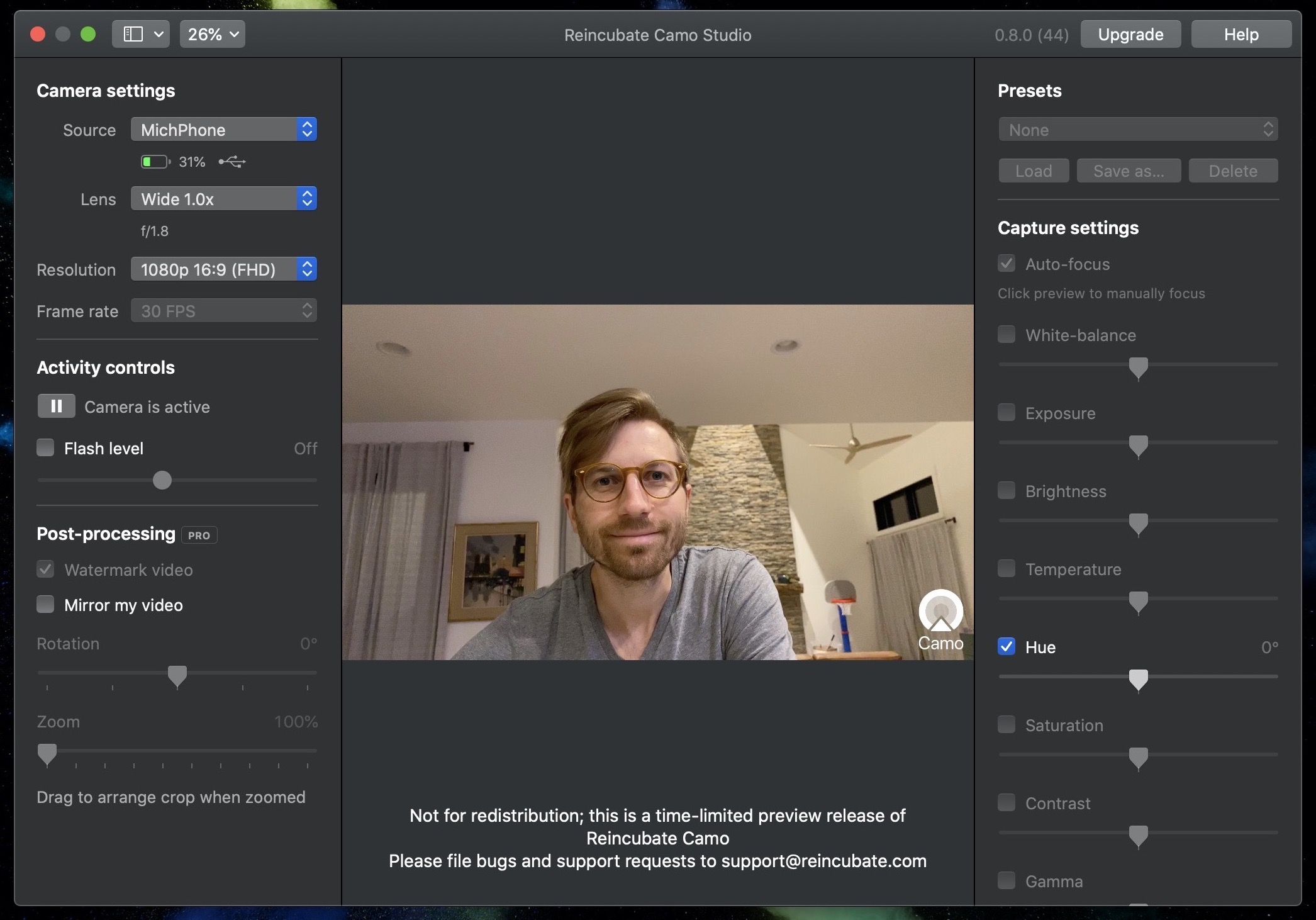 You’ve also got flash control, rotation, and the ability to pause the camera. 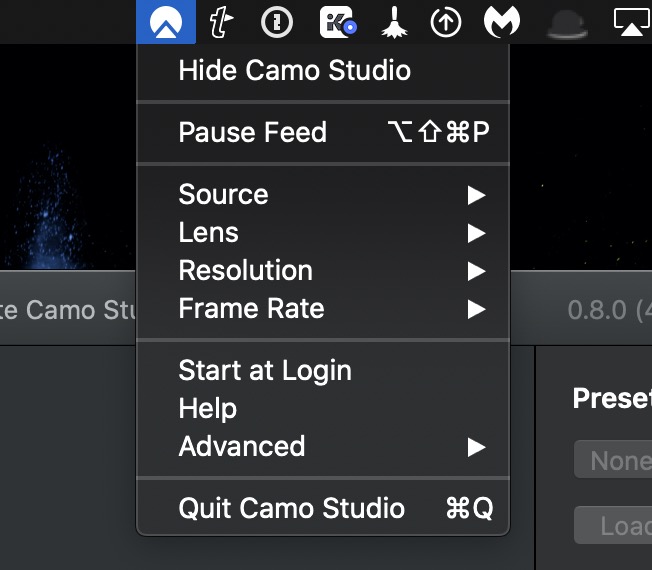 Another great touch, as you’ve noticed is that Camo support the macOS system-wide dark mode.

Camo Studio on Mac has a guide for each of the video call services it supports, but it’s straightforward to use it in various apps.

I tested out switching to using my iPhone 11 Pro with Reincubate Camo with Zoom.

You just need to head to your Zoom settings, and select “Reincubate Camo” as the camera. 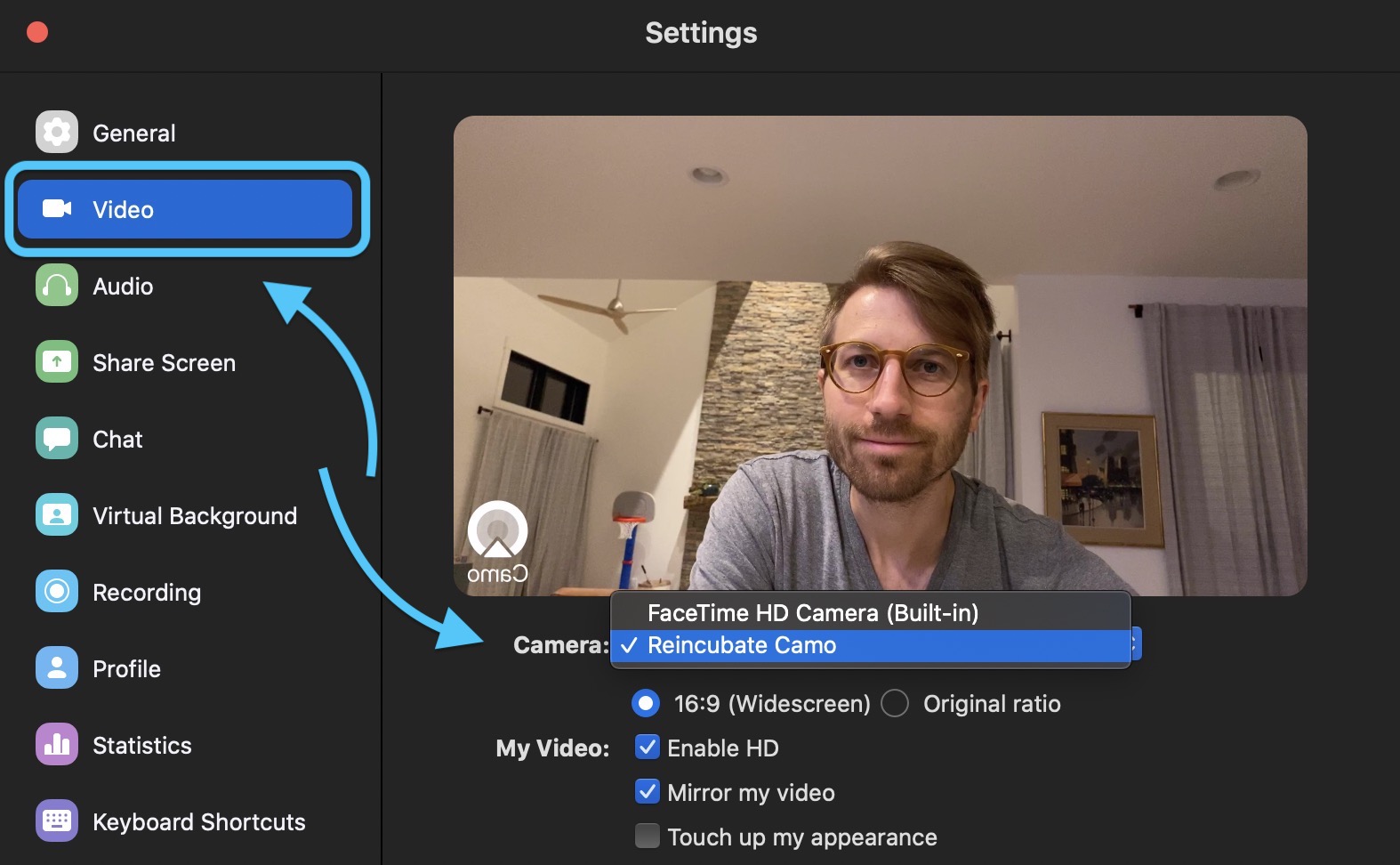 Here’s a side by side look at the picture quality between the 720p built-in FaceTime camera in my 15-inch MacBook Pro and the quality with my iPhone 11 Pro via Camo in Zoom. Oh, and this is with the default video picture settings in Camo.

In my time with Camo I found it to be reliable and work well. Some of my colleagues have been using it as well with one noting it performed flawlessly during a two-hour video podcasting session. Another nice aspect is that since you’re plugging into your Mac with your device, you won’t have to worry about running out of battery on your iPhone or iPad.

One thing to keep in mind when using an iPhone (or iPad or iPod) as your Mac webcam, it’s helpful to have a nice tripod or another mounting system to get it at the right height and angle above your Mac. You don’t necessarily need anything full-sized but something that is at least 12+ inches high will work to get it over any MacBook (probably want something a bit bigger for use with iMacs).

The team at Reincubate has seen almost 5,000 beta testers give Camo a try since May and they’ve released 9 updates in that period. I feel confident the app will continue to improve over time. Reincubate mentioned that Windows support is in the works and it is looking into possibilities for going even further with supported resolutions, but there are bottlenecks with video streaming services like Zoom and Google Meet.

iPhones are capable of producing *higher quality* videos than products like Zoom and Meet are even able to stream, with TrueDepth, LiDAR, and 4K @ 60 FPS. Reincubate is currently exploring support for these features, but at present there are few video products that could take advantage of them.

I think the app is a great option to improve your video calls with simple to use software for any user with enhanced granular control for power users. I also appreciate that Reincubate is going with an ad-free approach.

Learn more about Camo on Reincubate’s website here and you can download the iOS app from the App Store to get started now.