eBay scalpers selling iPhones with Fortnite installed for up to $18k 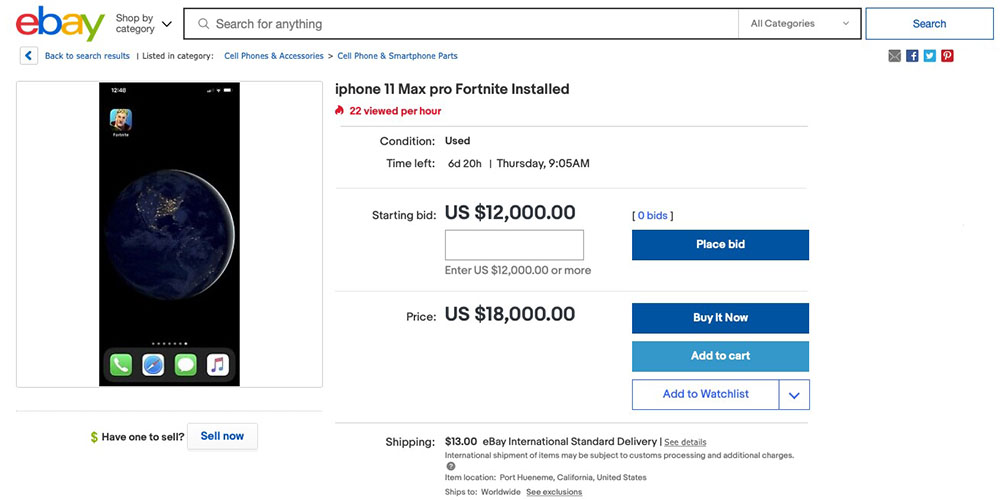 After Apple pulled Fortnite from the App Store, it didn’t take eBay scalpers long to get in on the action. Some are selling iPhones with Fortnite installed with asking prices of anything up to $18,000 …

Some sellers are rolling the dice and starting the bidding as low as a few dollars, trusting in demand to provide them with a steep markup on the value of the phone itself. Many other listings, however, have either starting bids or Buy It Now (BIN) prices into thousands of dollars, like this one with a starting bid of £12k and a BIN of $18k.

Business Insider notes that sanity appears to be prevailing, and most of the ridiculous listings for iPhones with Fortnite installed have attracted no bids.

Notably, “Fortnite” is a free-to-play game that’s available on nearly every gaming platform. Moreover, the game can be played across competing game platforms — whether you’re playing on Nintendo Switch, iPhone, PC, Xbox One, PlayStation 4, Android, or Mac, you can play with other “Fortnite” players.

In short, if you were looking for a way to play “Fortnite” other than on your iPhone, there are a lot of options. Given that, and the high prices attached to many of the eBay listings, it’s no surprise that most have zero bids.

Though “Fortnite” was pulled from the App Store last week, it’s unlikely to stay pulled forever — it’s one of the most popular games, and Apple has repeatedly said it wants to put the game back.

Just how quickly Fortnite will return to the App Store is hard to say. Epic has sought an injunction which would order the Cupertino company to restore it pending the outcome of the lawsuit, but the company would face a difficult time explaining why it needs this. Apple has said that if Epic remove its own in-app purchasing system, Fortnite would be welcomed back to the App Store.

As for the trial itself, we’ve outlined the four possible outcomes. Neither company seems in any mood for compromise, so a settlement now looks even less unlikely.