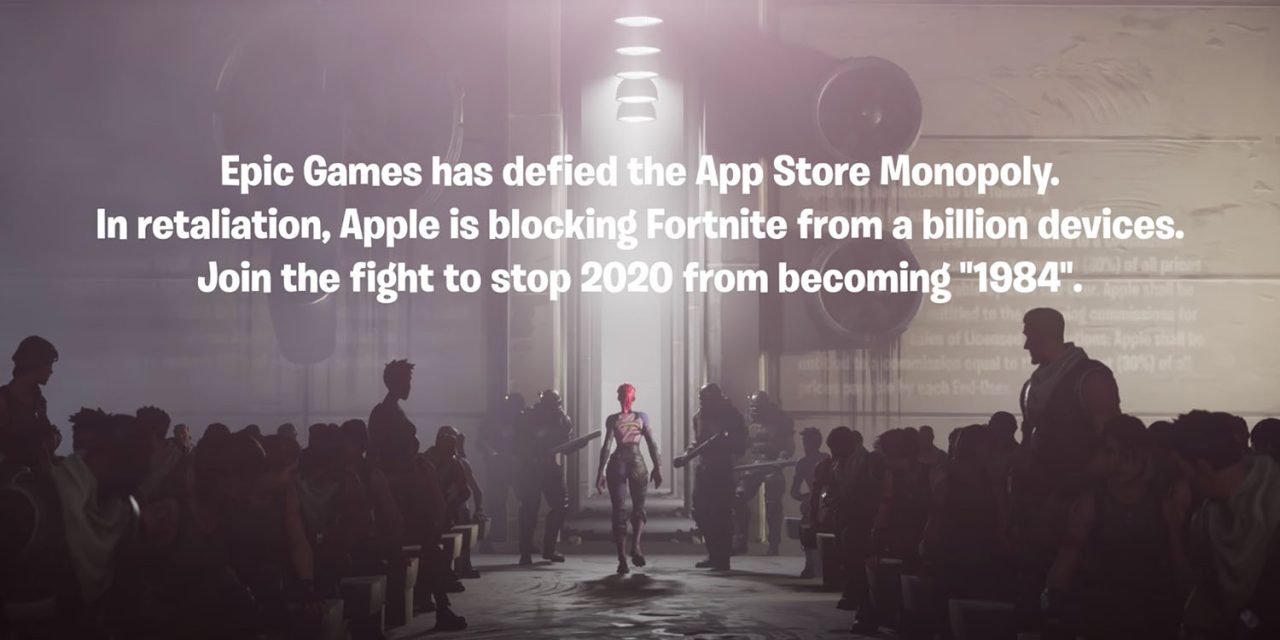 Regardless of who you think is right in the Apple/Epic battle, it’s hard not to admire the planning that went into the Fortnite maker’s surprise attack on Apple.

The company clearly knew exactly what it was doing. For the game company, there was really very little to lose …

How the Apple/Epic battle unfolded

Let’s start with a brief recap of what happened …

Fortnite is a massively popular freemium game. You can download it free of charge, but the company makes a fortune from in-app purchases. The game generated over $100M in its first 90 days and a month later was reported to have hit a cool billion dollars. It was still the top-grossing game this year.

Apple takes 30% of that revenue. (Google does the same for the Android version, though it is possible to sideload Fortnite and bypass the Google Play store.)

Epic wasn’t happy about Apple and Google taking such a hefty cut, so the company decided to take on the tech giants head-on. It offered a ‘direct payment’ option, offering in-app currency at a 20% discount for those who chose to buy direct from Epic rather than via Apple or Google.

That action was, of course, in direct violation of the terms of service of both app stores, and Apple responded exactly as Epic expected it to: by removing the app from the store.

Today, Epic Games took the unfortunate step of violating the App Store guidelines that are applied equally to every developer and designed to keep the store safe for our users. As a result their Fortnite app has been removed from the store. Epic enabled a feature in its app which was not reviewed or approved by Apple, and they did so with the express intent of violating the App Store guidelines regarding in-app payments that apply to every developer who sells digital goods or services.

Epic had a lawsuit all drawn-up and ready to file and immediately pressed the button on this. The lawsuit accuses Apple of antitrust violations. Not only that, but Epic says it doesn’t just want to win for itself, but to change Apple’s policies for everyone.

Epic is not seeking monetary compensation from this Court for the injuries it has suffered. Nor is Epic seeking favorable treatment for itself, a single company. Instead, Epic is seeking injunctive relief to allow fair competition in these two key markets that directly affect hundreds of millions of consumers and tens of thousands, if not more, of third-party app developers.

That wasn’t the only element of Epic’s preparation for this battle: the game-maker had also created a video parody of Apple’s famous 1984 ad, claiming that Apple was once the upstart rebel fighting against evil overlords, and had now changed sides.

Epic Games has defied the App Store Monopoly. In retaliation, Apple is blocking Fortnite from a billion devices.

That video is rapidly heading toward two million views in just 24 hours.

The Apple/Epic battle could go either way, but this is effectively a no-lose situation for the Fortnite developer. There were six possible outcomes when Epic started this:

(A seventh possibility has been suggested in the comments: that Epic loses, and Apple doesn’t let them back into the App Store even after removing the direct payment option. There’s zero prospect of this happening: Apple would lose its 30% cut; would lose its ability to say it treats everyone equally; and would look like a spiteful bully.)

The first didn’t happen. It was never likely, but there is precedent, so it was at least a possibility. The second remains theoretically possible, but it seems pretty clear from Apple’s immediate response and statement that the company has no plans to give an inch. Realistically, then, four possibilities remain.

First, Apple could choose to settle the case, either before or during trial. The Cupertino company doesn’t often back down from a court battle, so I don’t think it likely, but there is precedent for that too, so I wouldn’t rule it out. That settlement couldn’t be for Epic only – it would have to be for all developers – else there would just be an endless stream of copycat cases citing the precedent.

Second, Epic could win the lawsuit, and Apple could be forced to change its App Store policies or commission rates. In our poll, half of you were solidly on Apple’s side, but more than a third of you thought the company should rethink its approach.

Anytime two big companies go to battle in court, they are rolling the dice. Juries are unpredictable, and this one could go either way. Epic has a strong argument that consumers would be better off without Apple taking such a large cut, and has provided a very visible demonstration of this with its $8 versus $10 options.

Apple in turn will argue that it has created a massive market for developers like Epic, and that its cut is reasonable for providing access to more than 1.5 billion devices. Epic will counter that this number is itself evidence of a monopoly or, at least, duopoly with Google.

A jury could easily take the view that Apple would do just fine taking a smaller cut, and that the consumer benefit outweighs the benefit of a two-trillion dollar company making a larger profit.

Third, Epic loses the lawsuit, but the publicity is enough to influence the many lawmakers around the world who are carrying out antitrust investigations into Apple. Not everyone agrees, but my personal view is that this is the direction in which the tide is moving, so I wouldn’t be remotely surprised to see this outcome.

Finally, nothing changes. Epic loses the court case, and legislators do what they so often end up doing after all the fierce words: nothing. The Apple/Epic battle fizzles out. That, too, wouldn’t surprise me in the least.

Apple is the party at risk here, not Epic

What’s notable here is that Apple would lose in five of the original six scenarios. Epic loses in none of them. The worst that could happen from Epic’s perspective is the ‘nothing changes’ scenario, in which case it simply shrugs, removes the direct payment option, and is back into the App Store. It loses a bit of interim income, but that may well be balanced out (or more) by all the publicity generated by the case, and by creating goodwill from consumers who see the company as having made a valiant bid to stand up for the little guy.

Which of the four remaining potential outcomes of the Apple/Epic battle do you think is most likely? Please share your thoughts in the comments.