Tested: Chargeasap Flash 2 is a beefy power-bank with wireless charging 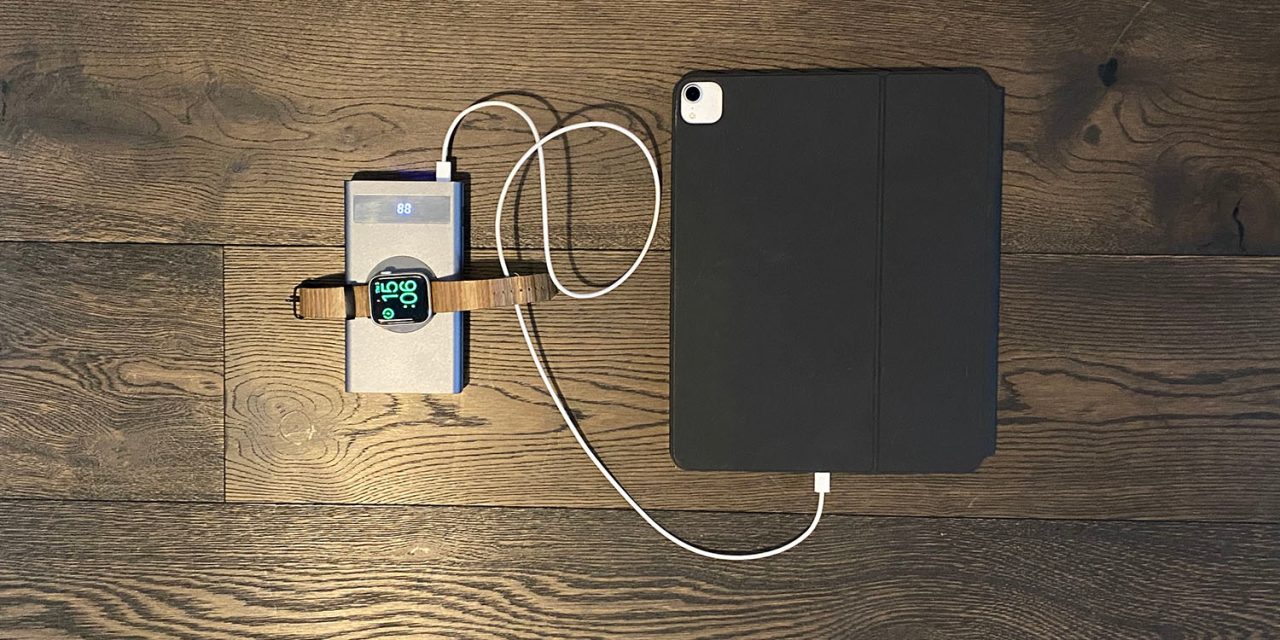 I normally decline power-bank reviews on the grounds that, for the most part, when you’ve seen one, you’ve seen ’em all. The Zendure SuperTank Pro was an exception thanks to its ability to double the battery-life of a MacBook Pro, while the Chargeasap Flash 2 (just Flash from now on) is a rather neat travel solution more geared to iPhones, iPads, and – unusually – the Apple Watch.

That’s not to say that the Flash can’t power MacBooks too: it definitely can. It can output a total of 210W, which gives it the same ability as the Zendure to charge or power two MacBook Pros at the same time. But this one has a lower capacity, while its USP is an integral wireless charging pad that can charge not only an iPhone, but also an Apple Watch …

The Flash looks a little bit like an over-sized iPod. There’s a small display at the top, and a glass disc below. Aside from that, the front is featureless grey aluminum. The rear just has a Chargeasap logo. The sides are ridged, with a power button on the right-hand side.

The device measures around six inches long by three inches wide by an inch thick, and weighs 1 pound 3 ounces. That makes it a little big and heavy for most pockets, so, like the Zendure, you’re likely to slip it into a bag.

Unlike the sophisticated power meter display on the Zendure, Chargeasap has opted for a minimalist approach: you get the remaining percentage capacity of the power back and that’s it.

There is one bothersome thing about the design: Chargeasap can’t decide which way up it goes! The port labels are aligned to have the logo on top, but then the display would be hidden and the charging pad unavailable. When you position it the right way up for use, the labels are upside-down!

If it’s for MacBook use, my view is you want all the capacity you can get. The Zendure delivers this, with a capacity of 26,800mAh, translating to 96.8Wh – or just within the maximum allowed you’re allowed to take onto a plane.

The Flash is still beefy, at 20,000mAh or 74Wh, which seems an odd decision. Why not simply go for as much power as someone can legally carry while traveling? The answer turns out to be that the product is made in Australia, which is served by some Asian airlines with a lower battery limit of 20,000mAh. Air Asia is a case in point.

That’s not going to be an issue for too many US or European buyers, though if you do travel on those airlines, it’s obviously a crucial factor. But for the rest of us, we’d need a good reason to opt for the Chargeasap over the identically-priced Zendure.

Chargeasap makes much of the graphene batteries, which have a higher power density than conventional lithium-ion ones, and also run cooler. The company says that while some power banks can reach temperatures of 167F, the Flash will never go above 122F. The company also claims graphene batteries have a significantly longer life in terms of charging cycles.

You switch on the bank by pressing and holding the power button until the display switches on. Switching off is the same, waiting for the display to switch off, or it will power off automatically if unused for a short time.

The wired charging ports are similar to those of the Zendure. You have two high-power USB-C ones, one maxing out at 100W, the other at 60W. The other two ports are for lower-power devices, one delivering 18W, making it suitable for an iPad Pro, while the remaining one can charge an iPhone at 7.5W.

One difference is that Zendure has opted for all-USB-C ports, while Chargeasap uses USB-A for the lower-power ones. Personally, I went all-in on USB-C cables when I bought my previous 15-inch MacBook Pro, but this mix of ports may be a benefit or drawback depending on your preferences.

With a lower capacity, it’s a bit faster to charge, at 70 minutes instead of 90.

The other big difference is the built-in wireless charging pad. This makes it neater, with the ability to travel with fewer wires. You can’t wirelessly charge both iPhone and Watch simultaneously, but if you sleep with your Watch on, you can charge your phone overnight and then your Watch while you get ready in the morning. This makes it an excellent all-in-one solution.

To charge your phone, lay it vertically on top of the Flash. To charge your Watch, you just lay it on the pad and it magnetically aligns automatically.

Rather confusingly, Chargeasap has updated the Indiegogo campaign for an earlier, three-port version of the charger we looked at in a sponsored post. But you do now get the 4-port one.

Earlybird pricing is $149, which is the same as the Zendure, though there were just a few of those left at the time of writing. After those are gone, the price bumps up to $169.

My view is that if you want to power a MacBook, you’re better off with the higher capacity of the Zendure. But if you’re looking for an all-in-one solution, wireless charging does make this a very nice option if you can live with the smaller battery.

The Chargeasap Flash is available from $149 on Indiegogo. It is scheduled to ship later this month.