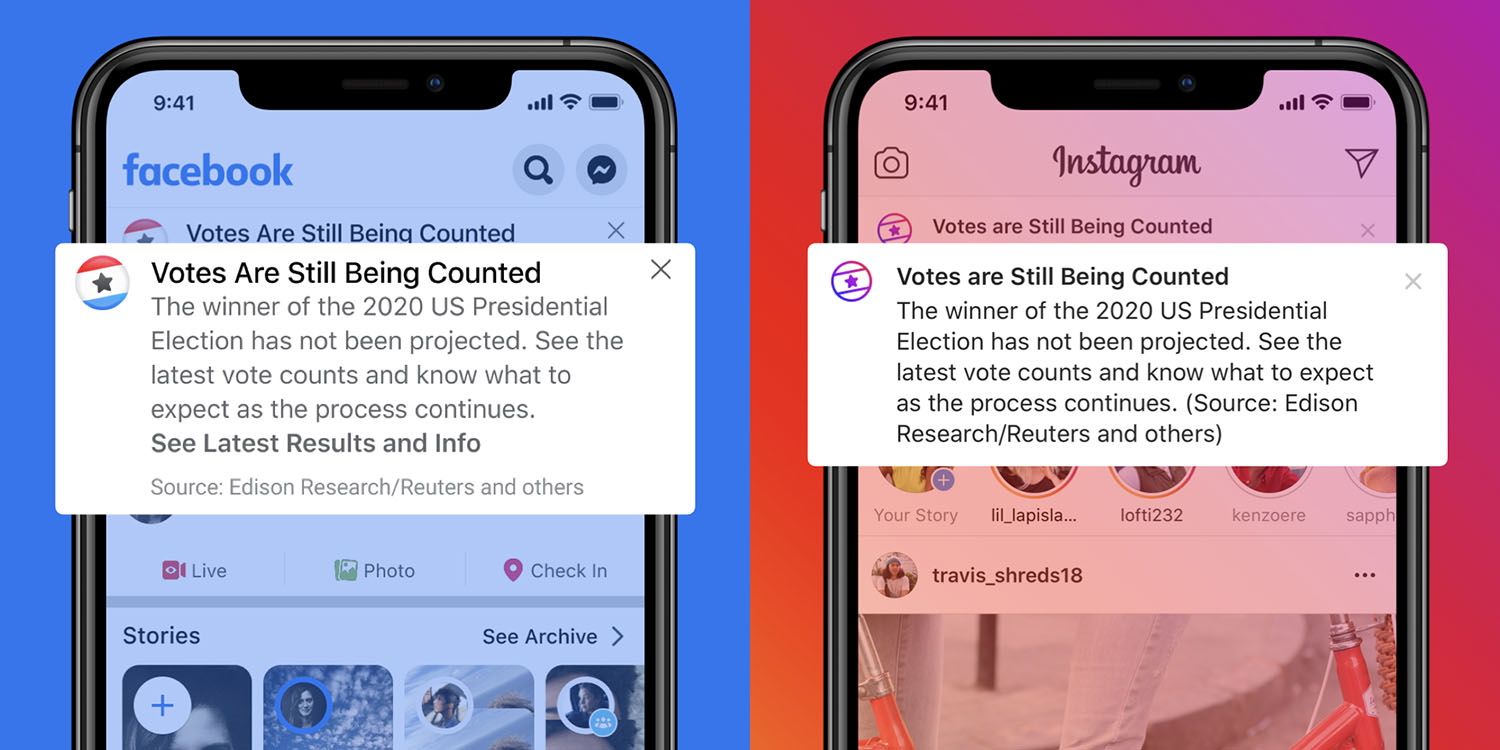 Three tech giants had to take action in response to presidential election hoaxes. This included Twitter placing a warning on a tweet by Donald Trump, which falsely accused the Democrats of trying to ‘steal’ the election.

Twitter stated that the tweet violated its civic integrity policy, which says that users ‘may not use Twitter’s services for the purpose of manipulating or interfering in elections’ …

We are up BIG, but they are trying to STEAL the Election. We will never let them do it. Votes cannot be cast after the Polls are closed!

Twitter hid this behind a standard warning text designed for such hoaxes:

We placed a warning on a Tweet from @realDonaldTrump for making a potentially misleading claim about an election. This action is in line with our Civic Integrity Policy.

The Verge notes that Twitter did the same with a false claim by Trump’s director of election day operations.

Earlier in the day, Twitter had placed similar restrictions on a member of Trump’s campaign staff. Mike Roman, the campaign’s director of election day activities, had posted tweets alleging widespread voter fraud in Philadelphia, together with video that was later labelled as misleading by the city’s district attorney.

Facebook and Instagram issued notifications that votes were still being counted after noting that Trump was making ‘premature’ claims of victory.

Once President Trump began making premature claims of victory, we started running notifications on Facebook and Instagram that votes are still being counted and a winner is not projected. We’re also automatically applying labels to both candidates’ posts with this information.

As one commenter replied, the word isn’t ‘premature,’ it’s ‘false.’

Insider reports that YouTube had to cut off a number of fake results livestreams, though it appears those were just scammers trying to earn ad revenue rather than attempting to interfere in the election.

Hours before any state’s polls closed on Election Day 2020, YouTube channels were broadcasting fake election night results to tens of thousands of viewers.

Eight videos out of the top 20 videos in the YouTube search results for “LIVE 2020 Presidential Election Results” showed what appeared to be the same fake results graphics that channels were spamming in an effort to get views and, on three of the channels, made money from advertisements that played before the stream via YouTube ad services.

Finally, the Washington Post reports that the FBI is investigating what appears to be voter suppression attempts by a foreign state.

A wave of suspicious robocalls and texts bombarded voters as they began to cast their ballots on Tuesday, sparking fresh concerns about the extent to which malicious actors might harness Americans’ smartphones to scare people from the polls.

Across the country, voters have received an estimated 10 million automated, spam calls in recent days telling them to “stay safe and stay home,” according to experts who track the telecom industry. In Michigan, government officials on Tuesday said they had witnessed additional attempts to deceive their state’s voters in particular, including one robocall campaign targeting the city of Flint that inaccurately told people to vote tomorrow if they hoped to avoid long lines today […]

The country’s top telecom carriers believe the calls are foreign in origin.

Vote counting is still in progress, with the outcome of the presidential election unknown at the time of writing.