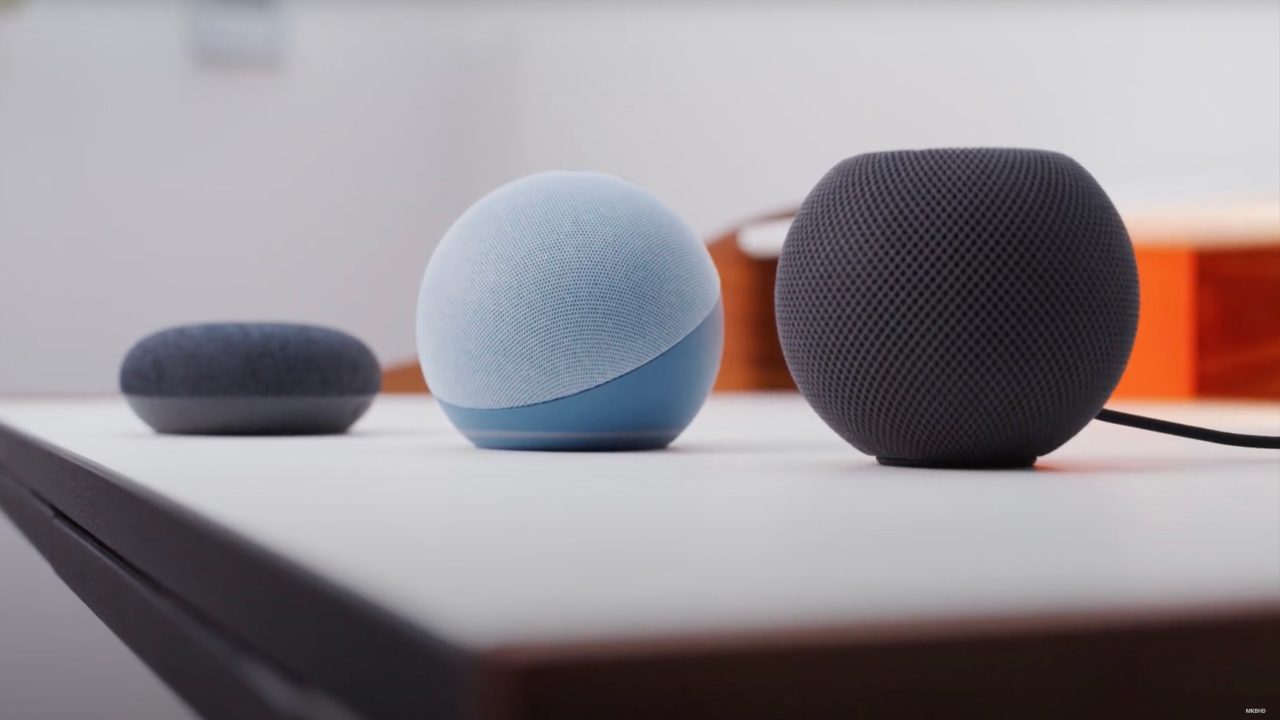 The HomePod mini went up for purchase last week and the first orders will arrive to customers on November 16. Ahead of that availability, the first reviews of the HomePod mini have now been published, and the sound quality is being almost universally praised.

TechCrunch says that the $99 HomePod mini offers “remarkably big sound” for its size and price point. The review specifically praises the 360-degree sound:

Where Amazon switched to a front-facing speaker for the new Echo, Apple continues to focus on 360-degree sound. Your preference may depend on where you place the speaker, but this model is more versatile, especially if you’re not just seated in front of the speaker all day. I’ve used a lot of different smart speakers in my day, and honestly, I’m really impressed with the sound the company was able to get out of the 3.3-inch device.

It’s full and clear and impressively powerful for its size. Obviously, that goes double if you opt for a stereo pair.

Ultimately, the HomePod mini sounds pretty great — but, it’s still a small speaker. The HomePod mini stacks up well from a quality perspective compared to the Nest Audio; I was surprised at how close the overall bass presence was between the two, and the HomePod mini seems slightly clearer, particular with vocals. But Google’s speaker has a bit of an edge on overall volume, and the clarity differences are less pronounced at higher volumes. Apple says its new speaker provides room-filling sound, but that only holds true if the room isn’t very large.

On the flip side, however, The Verge says that the HomePod mini “doesn’t sound as good as similarly priced competitors.

So it sounds good, but I can’t say the HomePod mini sounds great. And next to the larger Echo and Nest Audio, both of which cost the same, it simply can’t keep up. It doesn’t have the presence, volume, or sound stage of either, and it certainly can’t match the Echo’s bass output. As they say, there’s no replacement for displacement.

Despite not being quite up to the Echo’s sound performance, the HomePod mini does sound pleasant for most any genre of music and for podcasts and other vocal performances. It has good balance in the mid tones and a very vocal forward sound profile. You’ll hear the lyrics to your favorite song easily, without them getting overwhelmed by bass. The bass that’s there can be heard but not felt.

CNBC tried out the improved Handoff features, noting that some features won’t be coming until a future software update:

I also really like that I can start playing a song on my iPhone and tap the HomePod Mini and it’ll start playing on the speaker. Or a song can start on the speaker and I can walk by and transfer it to the iPhone with another tap. Apple will release an update in the coming months that will improve the hand-off experience with vibration and colors so it feels more like a song is moving from one device to another.

CNET emphasizes that people who already use and appreciate Siri and the Apple ecosystem will benefit most from the HomePod mini:

If you’re an Apple fan, you’re going to love this $99 smart speaker. It’s as cheap as Apple products will likely ever be. It sounds great, looks good and delivers the smart speaker functionality we’ve all come to expect thanks to its competitors. If you have an iPhone and an Apple TV, it’s a no brainer to go the HomePod Mini route for setting up your smart home.

The Wall Street Journal on the battle between Nest Audio, Amazon Echo, and HomePod mini:

For my multiplatform household, Nest Audio is my pick. Google Assistant has the smarts and the Nest Audio delivers dynamic audio fitting for my small space. And they just look nice. While I wasn’t a big fan of the new Echo speaker, it isn’t bad if you’re already locked into Alexa’s feature-rich world. However, for an all-in iOS home, the new HomePod Mini is a far more compelling product than the original—and a way for Apple to finally horn in on the smart-speaker action. For fewer features and higher fidelity, Sonos is always an option.

Across the board, the consensus among the early reviews seems to be that the HomePod mini is an excellent speaker for its price point, particularly for people who are already deep in the Apple ecosystem. Devices like the Amazon Echo still have the advantage for non-Apple households because of the cross-platform support. The HomePod mini, however, is more accessible than the original $349 HomePod (now $299).