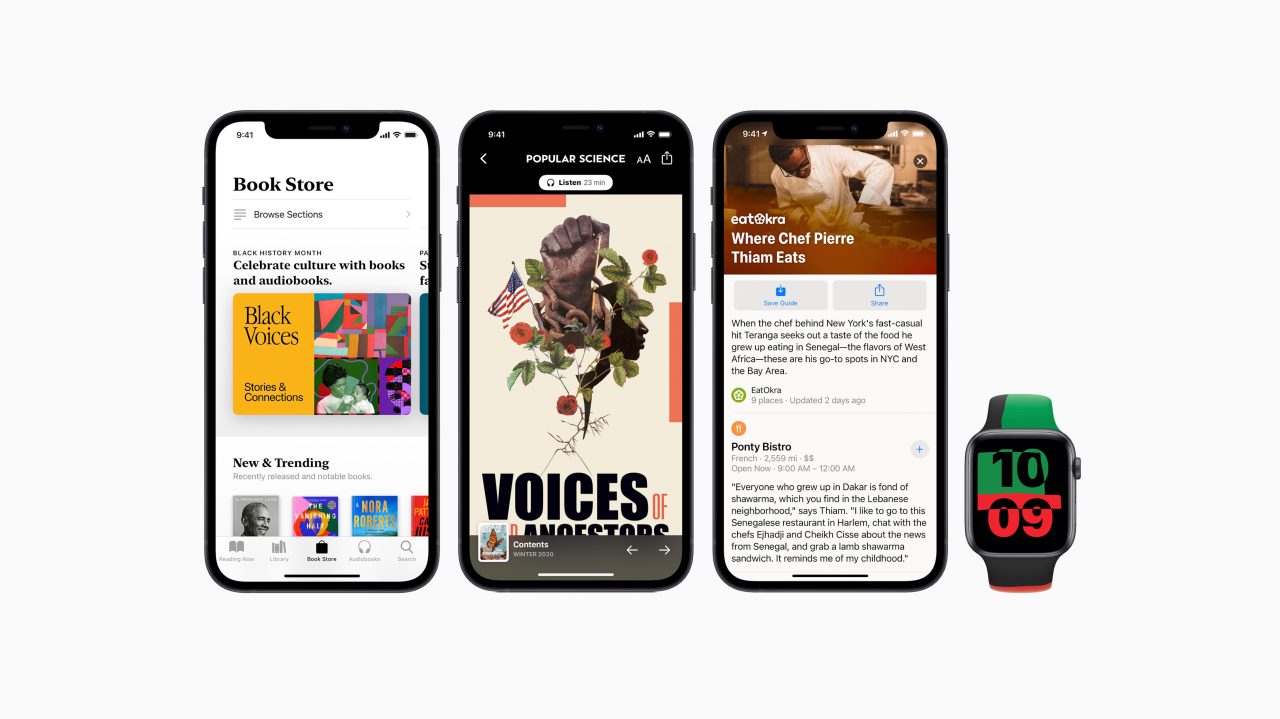 First and foremost, Apple is introducing the Black Unity Collection for the Apple Watch. This collection includes a limited-edition Apple Watch Series 6 as well as a Black Unity Sport Band. Through this collection, Apple is supporting global organizations to help advance their missions in promoting and achieving equality and civil rights in the US and around the world.

Apple is introducing the Black Unity Collection, designed to celebrate and acknowledge Black history and Black culture. The collection includes a limited-edition Apple Watch Series 6, the Black Unity Sport Band, and a Unity watch face. As part of this effort, Apple is supporting six global organizations to help advance their missions in promoting and achieving equality and civil rights in the US and around the world: Black Lives Matter Support Fund via the Tides Foundation; European Network Against Racism; International Institute on Race, Equality and Human Rights; Leadership Conference Education Fund; NAACP Legal Defense and Education Fund, Inc.; and Souls Grown Deep.

The Black Unity Sport Band uses colors inspired by the Pan-African flag with the words “Truth. Power. Solidarity.” laser-engraved onto the closure. Meanwhile, the limited-edition Apple Watch Series 6 features “Black Unity” laser-etched onto the back crystal.

The Black Unity watch face will be available as part of watchOS 7.3, which will be released later today. As 9to5Mac first reported, Apple will also hold an Apple Watch Unity Challenge throughout February. Apple Fitness+ subscribers can enjoy a collection of themed workouts, featuring all Black artists.

Throughout February, users can visit the App Store Black History Month Hub, which will spotlight Black-owned businesses, developers, entertainment and gaming apps, and social justice apps. The App Store will also feature stories with Black developers discussing the importance of representation in apps and games, with creators from ustwo games and Zynga.

Beginning in February, Apple’s latest Shot on iPhone campaign, “Hometown,” highlights the work of more than 30 Black photographers commissioned by Apple. Their mission was to capture amazing imagery of their “Hometown” from their own unique lens. This project covered a broad range of American cities and towns like Dallas, New York, Los Angeles, and many more.

As 9to5Mac first reported earlier today, Today at Apple and It’s Nice That are partnering on virtual creative sessions to inspire positive change.

Today at Apple, in partnership with design group It’s Nice That, is hosting New World, a program of hands-on virtual sessions and step-by-step tutorials focused on exploring the power of creativity to bring about change. During Black History Month, curator and writer Kimberly Drew will moderate sessions led by Black creatives who will discuss their creative practices and where they get inspiration, as well as demonstrate and teach one particular skill or technique.

On Apple Podcasts, listeners can enjoy an expansive set of shows from powerful Black voices including Michelle Obama, Joe Budden, Phoebe Robinson, and Baratunde Thurston; a collection of shows from creators around the world offering thoughtful interpretations of Black families; and an extended promotion of “Seizing Freedom” from Virginia Public Media, a show that documents the struggle to define freedom after 400 years of slavery.

The Apple TV application will also spotlight “Essential Stories” of the multidimensionality of the Black family and its representation onscreen. Apple will also be making “The Oprah Conversation” episodes about the book Caste available for free.

This month’s theme for “Essential Stories” on the Apple TV app will spotlight the multidimensionality of the Black family and its representation onscreen. Viewers can dive into the “Essential: Stories That Honor Black Families” collection with curated sets of films and TV shows that explore motherhood, fatherhood, iconic TV families, queer chosen families, and more.

“The Oprah Conversation” episodes “Caste: Part 1” and “Caste: Part 2” from Apple TV+, featuring Pulitzer Prize-winning journalist and author Isabel Wilkerson and her book “Caste: The Origins of Our Discontents,” will be available for free on the Apple TV app.

Apple has also announced that Apple News readers will be able to explore curated topic groups that will highlight the best journalism around race in America. There will also be a special Apple News+ Spotlight collection with audio articles that celebrate the Black experience.

On Apple Books, a new collection will highlight “great books and audiobooks by Black authors across a variety of genres.” Apple Music is launching a month-long experience across to to highlight musicians spanning jazz, blues, soul, gospel, R&B, pop, and hip hop. Apple Maps users will be able to enjoy curated Apple Maps Guides created in collaboration with EatOkra, a Black-owned business directory app based in Brooklyn.

The Black History Month collections and content across Apple services will be available starting February 1.