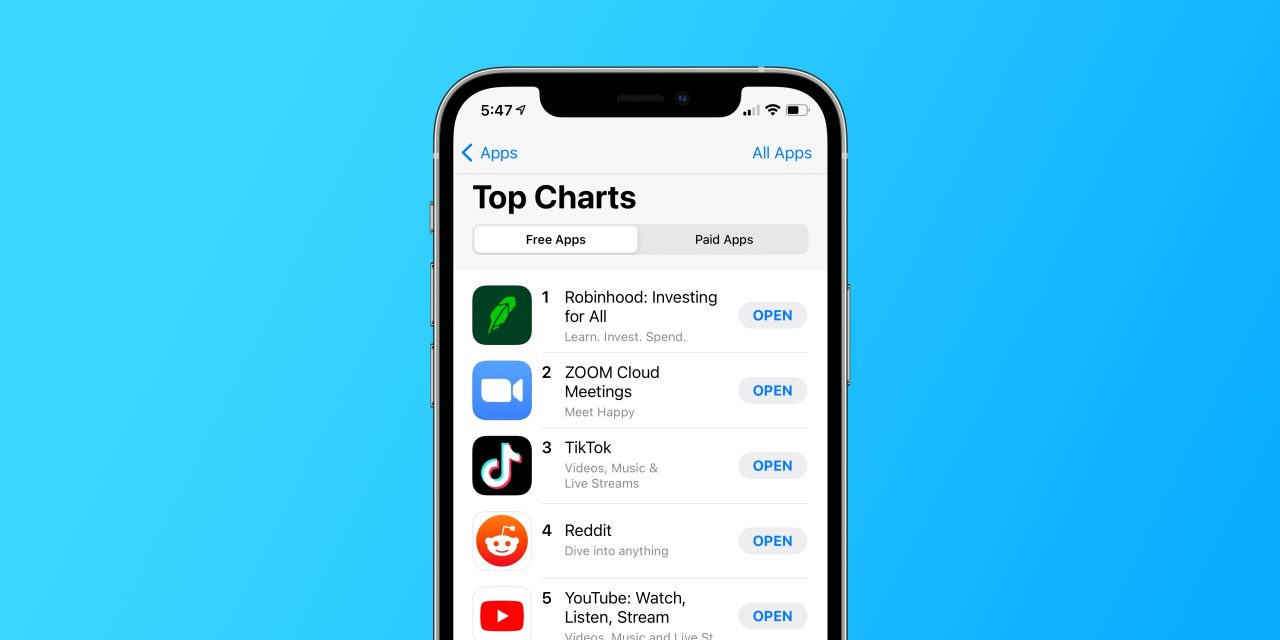 Over the last week, the Reddit forum WallStreetBets has helped push stocks like GME (GameStop), AMC, and BB (BlackBerry) to new highs. New data from Appfigures today indicates how this viral retail investing trend has sent apps like Reddit and Robinhood to the top of Apple’s App Store charts.

If you haven’t been keeping up with this story, GameStop (GME) stock has risen by over 1,350% during the last month, driven in large part by the WallStreetBets subreddit. Other companies have also benefited from this push, including AMC Entertainment Holdings (AMC), BlackBerry (BB), Nokia (NOK), Express (EXPR), and more.

As other reports have explained, retail traders such as those using Robinhood are pushing stocks that are commonly shorted by hedge funds, therefore squeezing them out of their positions. A report from Bloomberg puts it like this:

Give credit where it’s due. In their frenzy, WSB’s cocky hordes have managed to turn the tables in a game short sellers invented, spinning gold from the complacency of others. Before this year, GameStop was a cash register for bearish traders, who borrowed and sold more shares than the company issued. Hedge funds had been winning so long that they overlooked the tinderbox they were creating should sentiment turn.

Even Elon Musk got involved, sending GameStop’s stock even higher yesterday afternoon and into today:

So how does this all tie back to the App Store? The vast majority of this trading is taking place in Robinhood.

Currently, the top free app on the App Store is Robinhood, the popular stock trading app that users are flocking to in the wake of the WallStreetBets madness. Appfigures estimates that this push will bring nearly 1 million new users:

We forecast this uplift in ranks, which is the first time Robinhood got so high up the charts, to bring in nearly 700,000 new users to the app today. And a new all-time high for Robinhood.

Here’s a chart showing Robinhood for iOS downloads over the past month:

Other popular trading apps have also seen growth on the App Store thanks to this craze. WeBull is now ranked number 51 in the App Store, for example.

The story is similar for Reddit, which also saw a spike in downloads after Elon Musk tweet a link directly to the WallStreetBets subreddit. Currently, Reddit sits as the fourth most popular app in the App Store:

Our forecast is showing downloads at nearly 400,000 today, which is, by far, the most downloads Reddit’s seen in a single day in the U.S., much like Robinhood. There’s a lot more to the GameStop short squeeze story that isn’t playing out on the App Store, but one thing is clear—Elon Musk is a kingmaker, and he knows it.

Regardless of the financial implications of what’s going on with the stock market this week, this data from Appfigures does provide an interesting look at how the App Store has empowered users. One thing that will be notable over the coming weeks is seeing how sustained this interest in Robinhood and other trading platforms is.

What do you think of this news? Let us know down in the comments!