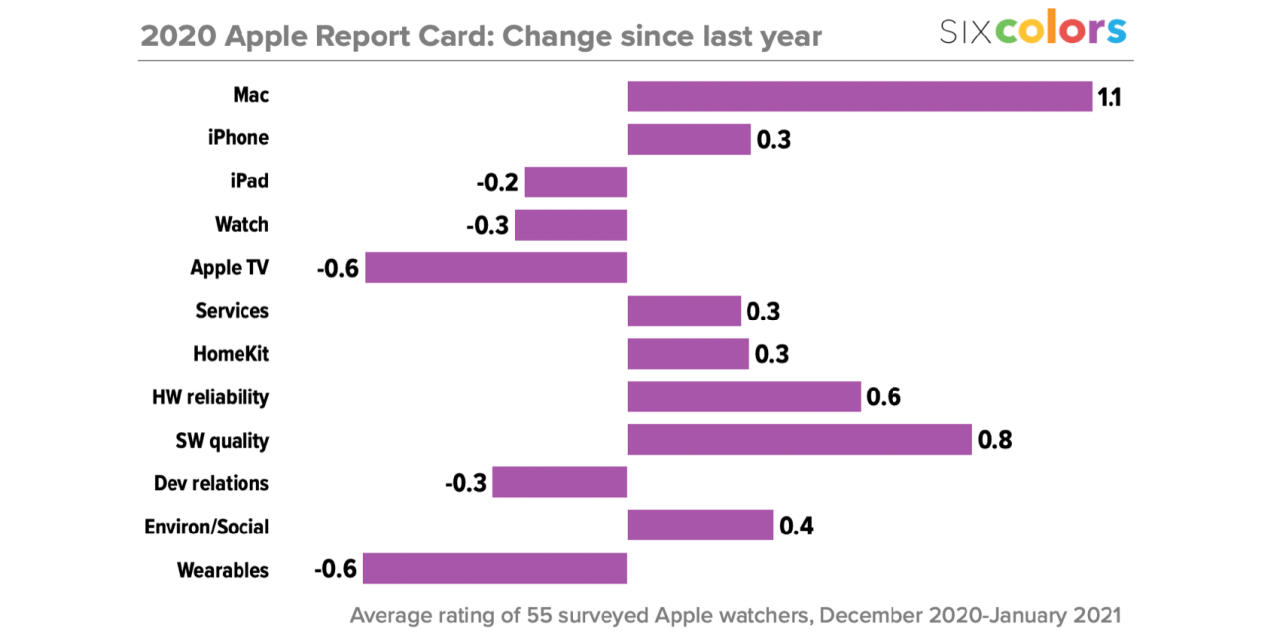 Jason Snell is out with this year’s Six Colors Apple report card, and it indicates that industry commentators saw a dramatic improvement in Apple software quality in the course of 2020.

Unsurprisingly, the single biggest win for Apple was seen as the M1 Macs, but software quality saw the second biggest positive shift…

Snell invites a selection of Apple commentators to score Apple on a five-point scale for each of the following:

But interestingly, we also see a dramatic jump in perceptions of Apple’s software quality. This improved from 2.7 to 3.5, also close to a 30% increase. However, Snell does note that this was because 2019 was a rough year.

Scores for Apple’s software quality were all over the place. It was a big grade leap from 2019, which was a rough one for iOS and macOS alike. (And when you look at the history of this score, it’s clear that Apple has taken a “tick-tock” approach to its software.) But still, while some panelists felt Apple turned things around and started going in the right direction, others were still vexed by software problems. Still, even the more positive observers seem to have the attitude that Apple has plenty more work to do on software before they’re satisfied.

For the 9to5Mac contingent, Benjamin Mayo and Zac Hall explained their reasoning.

Mayo: “iOS 14 was a pretty big release in terms of new features and debuted to the public without anything notable going awry. Big Sur has been surprisingly stable too, although some UI decisions are baffling.”

Hall: “The Intel to Apple silicon transition has been flawless in terms of supporting my work and avoiding show-stopping issues.”

Scores were lowest for Apple TV, at just 2.1 out of 5, thanks to another year without any innovation. This also saw the biggest year-over-year fall, matched by Wearables.

2020 was perceived as a treading-water year for Apple Watch by most panelists, and watchOS 7 was also lukewarmly received. But there was a lot of appreciation for Apple’s constant iteration and improvement on the Apple Watch. Panelists were much more enthusiastic about AirPods, though there was a mixed reaction to the new AirPods Max.

Check out the full commentaries over at Six Colors.