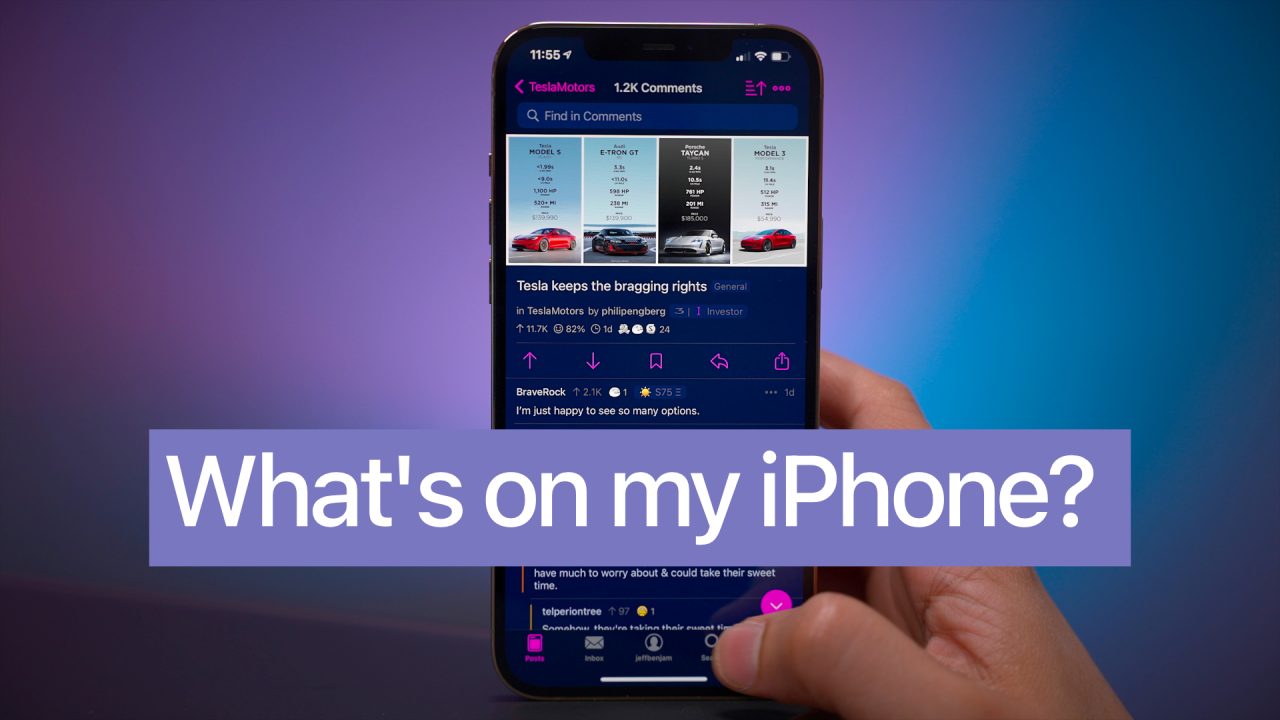 In this latest edition of What’s on my iPhone, I take a look at some of the apps that I use on a regular basis. Some of these apps have been around for years, while others are relatively new to the first page of my iPhone’s home screen. Inside you’ll find details on my favorite Reddit client, my go-to app for securing cryptocurrency, an app that helps put the kibosh on annoying robocallers, and more. Watch our hands-on What’s on My iPhone episode, and subscribe to 9to5Mac on YouTube for more videos like this.

Apollo is an app I use daily to peruse the likes of r/apple and r/teslamotors. It’s a jam-packed app that comes with loads of convenience features, such quick action shortcuts for quickly jumping to your favorite subreddits directly from the home screen, full commenting, up- and downvoting support, picture-in-picture video, crosspost viewing, widget support, theme and custom icon support, and much, much more.

Apollo’s developer, Christian Selig, is highly involved and is always looking to implement new features. There’s even a section within the app to submit and view feature requests. As a bonus, Apollo is available on the iPad and on M1 Macs without needing to sideload. If you use Reddit and you haven’t tried Apollo, you’re missing out.

Some of the most annoying things that I have to deal with on a daily basis are robocalls and spam calls. At one point late last year, I was receiving no less than 10 spam calls a day with no sign of it slowing down. I debated changing the phone number that I’ve had for the last 20 years, but figured it was worth trying a spam blocker again before taking such a drastic step.

After installing Nomorobo, which requires a $1.99 monthly subscription via in-app purchase, my incoming spam calls weren’t completely eliminated, but they were reduced drastically enough that I could deal with what remained. Nomorobo utilizes a database that its users contribute to in order to identify spam callers. You can choose to have the spam called blocked and sent to voicemail, or have them identified as a robocaller.

If a robocall happens to make it through, you can send the contact directly to Nomorobo to add to the block database. I’ve been fairly satisfied with the app thus far, and I now consider the $1.99 monthly fee the cost of doing business in a robocall-dominated world.

I’ve dabbled in cryptocurrency in some form or fashion for years, and I’ve heard enough horror stories about stolen crypto that I decided it was time to purchase a hardware wallet to store my private keys. If you’ve been following cryptocurrency, you’ve probably heard the adage “not your keys, not your coins,” which basically means if you don’t posses the private keys, then you don’t truly own your bitcoin, or other alt coins. In a nutshell, your private keys are what gives you access and control over your funds.

That’s where a hardware wallet comes in. A hardware wallet, like the Ledger Nano X, Trezor One, and others, allows you to securely store your private keys offline, instead of entrusting them to a third-party wallet or exchange.

I haven’t used enough hardware wallets to recommend one over another, but I’ve been satisfied with the Ledger Nano X. It’s super easy to set up, and stores your private keys offline. If the device is run over by a car, you can simply use the recovery phrase that you establish during initial setup to restore your keys. For extra safekeeping, some people opt to secure their recovery phrase via a so-called steel wallet.

The Ledger Live app is what I use to interface with the Ledge Nano X. It works via Bluetooth, and allows me to send and receive cryptocurrency with ease. If I buy cryptocurrency with an exchange like Coinbase or via Cash app, I can then send that crypto to my offline hardware wallet for safekeeping. This isn’t an outright recommendation of Ledger over other similar hardware wallets, but it’s recommended that you acquire some type of offline method to store your precious private keys, especially if you plan on holding them long term.

It’s no secret that I’ve long been a huge fan of Filmic Pro. It’s been the best video-centric app for iPhone users since the day it was launched, and it’s still just as useful all of these years later.

While Apple has adopted some of the features that were once only found in third-party apps like Filmic Pro — such as the ability to change frame rate to 24p, and change frame rate on the fly in app — other features remain exclusive to $14.99 professional video app.

One of my favorite Filmic Pro features is the ability to perform a rack focus from one subject to another. This allows you to smoothly transition between subjects just like you would with a follow-focus on a physical camera. Of course, that’s really just scratching the surface as far as features go. Filmic Pro also supports the ability to set white balance, record from external Bluetooth microphones, clean HDMI out capability, and more.

Being more efficient with my time and sticking to a tighter schedule are two things that go hand-in-hand, and Timecap is an app focused on helping one accomplish just that. Timecap focuses on tracking three types of activities: time-tracking activities for goals or habits that you wish to limit, check off activities for things you do once every period, and count activities, for things you do multiple times a day.

Users can combine all three activity types over a variety of periods, such as daily, weekly, monthly, etc. You can also set up an activity as either a goal, or an item/habit that you wish to limit. For example, if you have a habit of watching YouTube, you can use the app as a way to help track, and hopefully limit, your YouTube interactions.

To get the most out of Timecap, you will need the premium version, which unlocks the ability to create activities with manually selected days, tracking multiple timers, unlimited tags, etc. A one-time lifetime subscription is $18.99. Unfortunately, Timecap doesn’t utilize iCloud backup, instead forcing users to utilize the app’s own backup solution, but their privacy policy and terms of service are clear and easy to read, and Sign in with Apple support is in tow.

What’s your favorite app in this month’s edition of What’s on my iPhone? Are there any apps on this list that you’re itching to try? Are the any similar apps that you use in your daily workflow? Sound off in the comments with your thoughts.