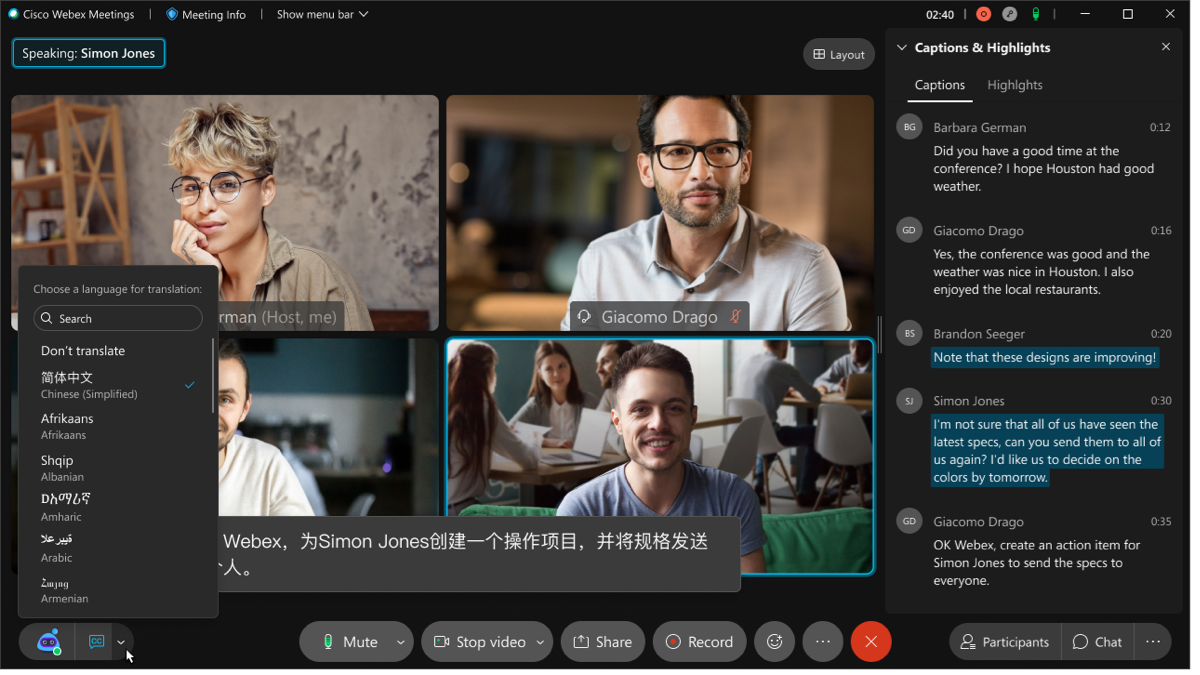 In December 2020, Cisco announced a wave of Webex new features to its videoconferencing service. This month, it is starting to roll out real-time translation as a test for more than 100 languages on Mac and other platforms.

This feature is coming this month, with general availability planned for May. At first, Cisco expected to start testing real-time translation in February, but things were delayed until now.

With this new feature, language won’t be a barrier anymore. People will be able to translate from English to more than 100 other languages, such as Spanish, French, German, Mandarin, Portuguese, Arabic, Russian, Dutch, Japanese, and more.

‘The inclusive features of Webex help create a level playing field for users regardless of factors like language or geography. Enabling global Real-Time Translations is another step toward powering an inclusive future and an important component of driving better communication and collaboration across teams,’ said Jeetu Patel, SVP and GM Security and Applications, Cisco.

The company still has other new features on the way. For 2021, Cisco is launching a lot of new things:

It’s not only Cisco Webex that is adding real-time translation to its service. Google Meet has had this feature since January, allowing users to use Otter’s AI-powered transcription tool to caption their meetings.

Skype also offers real-time translation via Microsoft Translator, but the feature has yet to be added for Microsoft Teams meetings, which can only translate messages between users.

Now, it’s time to try out Cisco’s new feature to see if it has the potential to transform conferences involving people from all over the globe.

Also today, Microsoft announced during its Ignite event that Teams is finally receiving end-to-end encryption, among other features.

For now, E2EE will be available only for one-to-one Microsoft Team calls. The company says IT will have full discretion over who can use E2EE in the organization and will be available to commercial customers in preview in the first half of the year.

The company announced today a new smart speaker feature that can identify and differentiate the voices of up to 10 people talking in Microsoft Teams Rooms.

These speakers were created in partnership with EPOS and Yealink, and allow attendees to use the transcription to follow along or capture actions, by knowing who in the room said what. To enable privacy and security, users are in full control and can turn attribution on or off at any time.