Concept: TV+ has hit its stride – it’s time for official merch from the Apple Store 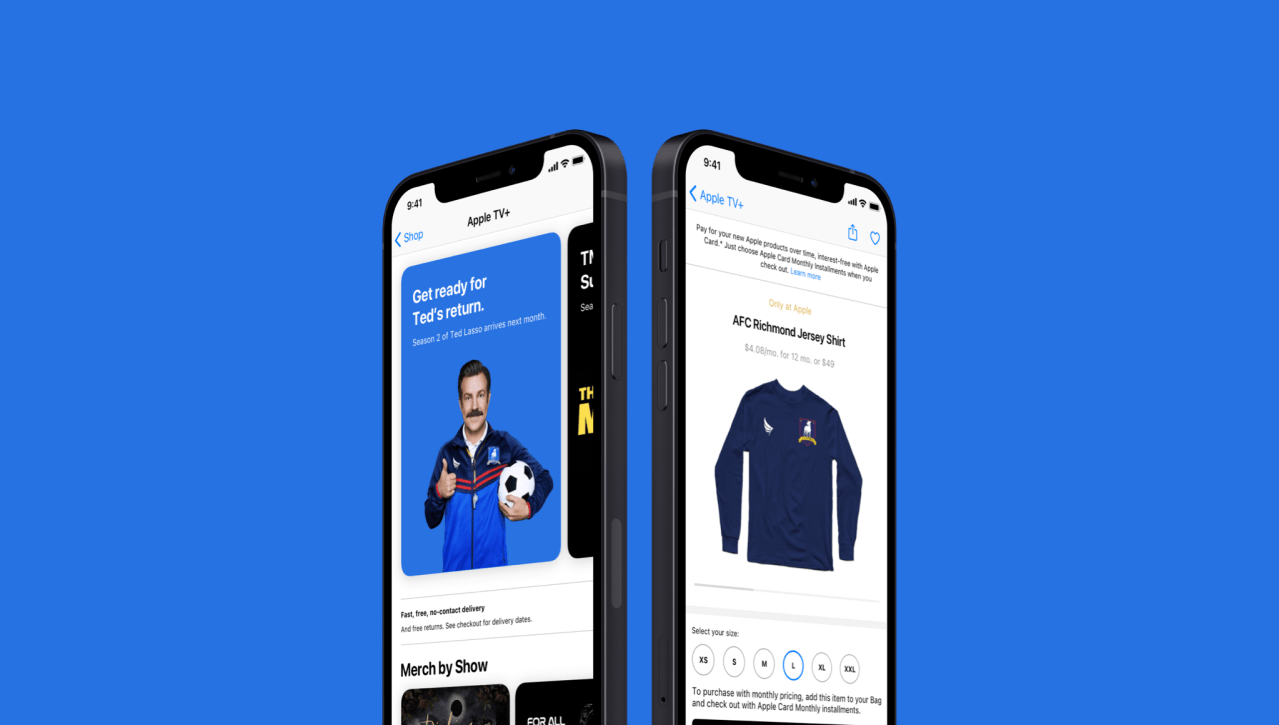 It’s been two years since Apple unveiled Apple TV+ for the first time in spring of 2019. It’s taken some time, but it seems as though the service has finally hit its stride with hits like “Ted Lasso” and “Dickinson.” Other shows have developed cult-like followings, such as “For All Mankind,” and major events like the new Billie Eilish documentary have been quite popular. It’s clear that fans are ready for Apple to make some official merchandise for their shows. One of the creators of “Ted Lasso” tweeted a few days ago that merch is indeed on the way. Here’s what that might look like.

There is plenty of bootleg merch on the web for different Apple TV+ shows, primarily for “Ted Lasso.” That comes as no surprise since the show has been a huge hit for the company. The upbeat show has become a mainstay of pandemic life. It’s uplifting and just a pure joy to watch during these difficult times.

We all know that if Apple were to take a stab at making merch, they would make some awesome things. In fact, they already have made some products to market shows like “Ted Lasso.” But they haven’t made them available to the public, rather opting to send gift packages to press and leaders of the television industry. The Apple-branded merch products that they sell exclusively at Infinite Loop and at Apple Park have always been incredibly cool pieces to show your Apple pride. There’s no doubt that Apple’s designers could do the same for these shows and films.

It could start with the addition of a new Apple TV+ category in the Apple Store app and on Apple.com. I’ve used some unofficial merch in these examples, but they still get the idea across. I also think it would be worth exploring an Apple Music merch section as well for promotional items like the new Billie Eilish gift card and sticker.

A merch store within the Apple Store app could look a lot like the existing accessories sections. But instead of organizing primarily by category, items could be organized by show. Choosing a size would be just like choosing a size for a Solo Loop band. All of the key mechanisms are in place for merch like this.

I know plenty of people who would love to prepare for the next season of “Ted Lasso” or “The Morning Show” and pick up merch for those shows. If Apple were to go down this route, I’d expect these items to be online exclusives and “Only at Apple” products. It’d simply be a nightmare to stock apparel and promotional items in every single Apple store around the world on top of existing and future products. It also makes it easier for Apple to potentially print on demand in an effort to avoid having to manage inventory.

You can check out some of the merch that Apple has been sending out for season 2 of “Ted Lasso” below. The gift box includes things like a mug and jersey, amongst other things.

What do you think about Apple making merch to promote Apple TV+ content? Let us know in the comments below!