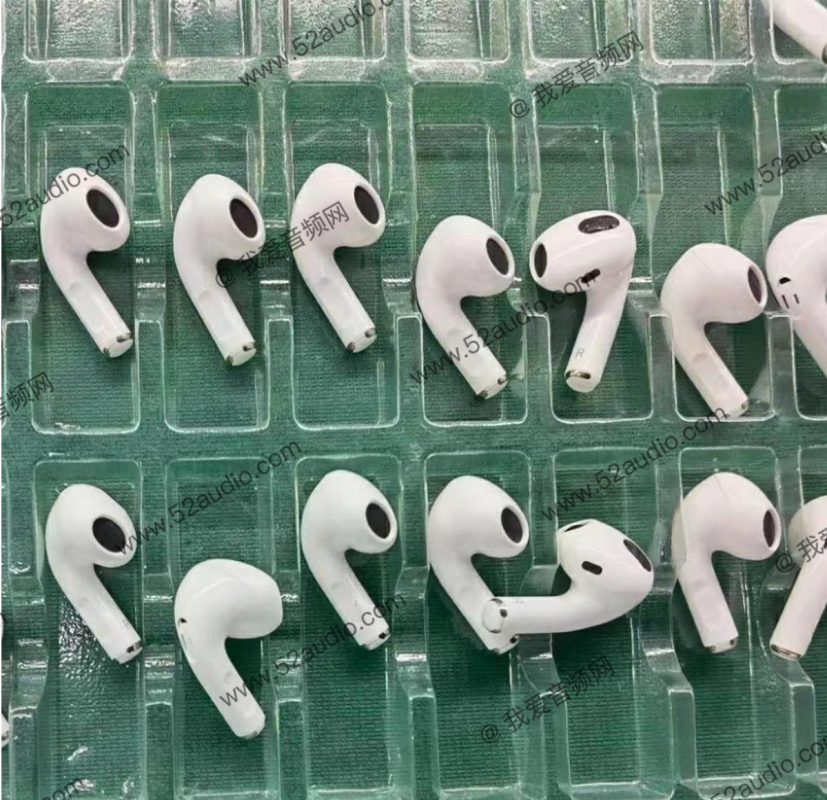 Audio tech news site 52audio shared some new photos of Apple’s upcoming third generation AirPods. These have been leaked like crazy over the past few weeks but today’s photos are the clearest ones yet. Apple’s third generation AirPods are clearly inspired by AirPods Pro with shorter stems, a shorter charging case, and rearranged sensors.

One thing that has been debated is whether or not these new AirPods will have interchangeable ear tips. Today’s photos make it clear that they won’t and instead will have a similar universal fit to that of the current generation AirPods.

The third generation AirPods have a unique mixture of the original AirPods design and the AirPods Pro design. In your ears they will look a lot like AirPods Pro but outside of your ears you’ll notice that the speaker components look like regular AirPods. These upcoming AirPods also include the same squeezable stems as AirPods Pro with playback controls.

52audio notes that these new AirPods maintain the same Apple H1 chip that the second generation AirPods currently have. They also won’t have noise cancellation or transparency mode. Battery life is expected to be on par with the current AirPods, meaning you can expect to get around 5 hours of playback time. The new smaller case will continue to hold up to 24 hours of battery life.

The AirPods themselves have new proximity sensors that surround the small speaker. They’re similar to the ones on AirPods Pro but are not nearly as long. Additional sensors appear on the underside of the AirPods like they do on AirPods Pro.

Long story short, these new AirPods combine the universal fit of the standard AirPods with the shorter stem and playback controls of AirPods Pro. They’re primarily a visual update to standard AirPods, making them more modern, rather than a technological one, lacking active noise cancellation, transparency mode, and interchangeable tips.

We expect these new AirPods to launch sometime this month, potentially during the rumored March 23rd event. Are you excited for the new AirPods? Let us know in the comments below!