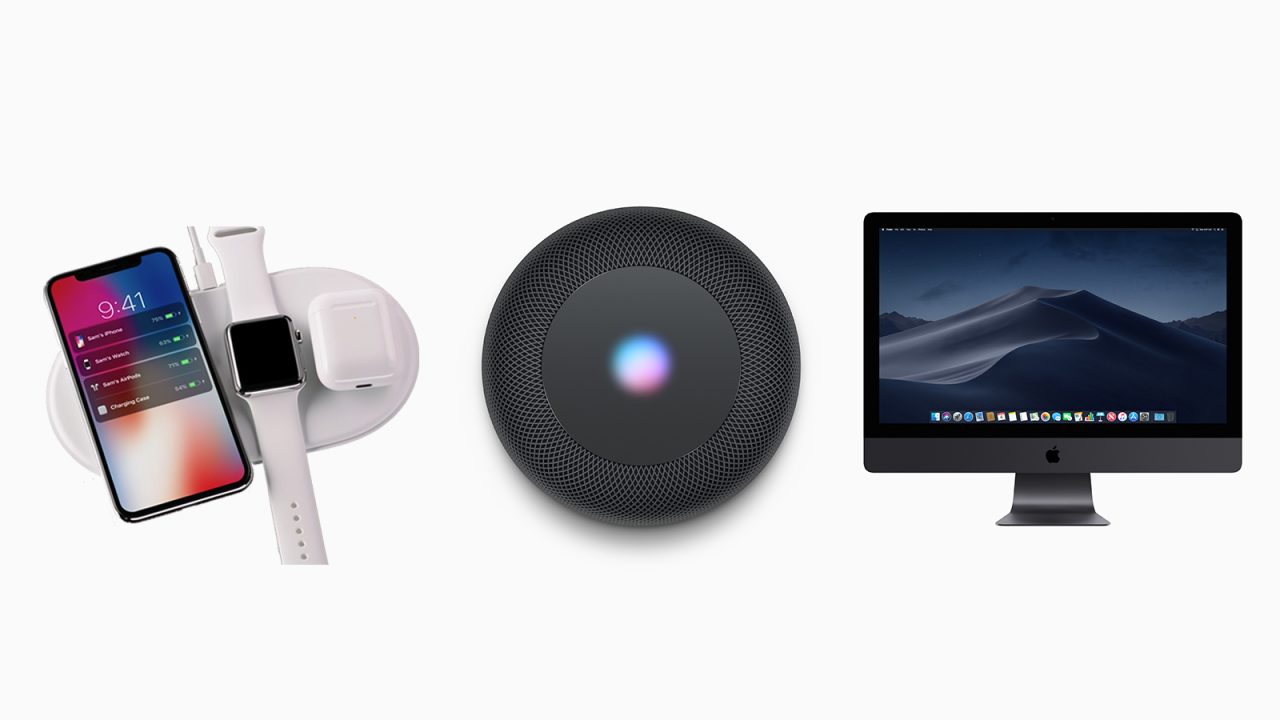 Looking back, 2017 should’ve been a great year for Apple: ten years of the first iPhone, Apple Watch Series 3, updates to the Mac, new iPads, the Apple TV 4K, and two brand new products: HomePod and AirPower. But as time has passed, some products by the company didn’t age well.

Of course, we have to start with AirPower, the wireless (Qi-based) charging pad that was suppose to simultaneously charge an iPhone, Apple Watch, and AirPods. It took Apple almost two years to cancel the project.

The internal structure of AirPower consisted of three layers of coils, which didn’t work out. Aside from the memes, this product could have revolutionized the way we charge devices wirelessly.

As for now, we have MagSafe, which can fast-charge an iPhone 12 (with the right power brick), and the MagSafe Duo, which can charge an iPhone and the Apple Watch at the same time. With MagSafe now available, AirPower is one of the products Apple tries to forget that was ever announced.

Now, with the iMac Pro and the HomePod, things went a little bit different. With very specific niches, both of the products survived until March of 2021.

As a matter of fact, the iMac Pro had that outdated design from the iMac line, but with a Space Gray finish, which was nice. This product ended up being a replacement for “Pro” users who were missing a new Mac Pro, and it came following the infamous trashcan-style Mac Pro.

With the first-ever addition of Intel Xeon processor options in the Mac line, it included up to 18-core upgrade options, 128GB of RAM, and 4TB of flash storage. When Apple announced the new Mac Pro and Pro Display XDR at WWDC19, the iMac Pro wasn’t a good choice anymore.

The HomePod, on the other hand, was a great product, but also Apple’s most misunderstood product, according to my colleague Ben Lovejoy. Read an excerpt from his article:

“There was a huge chasm between what it really was, and what most people thought it was – and Apple’s marketing didn’t help. Ask most people to tell you what a HomePod is, and they’ll tell you it’s Apple’s smart speaker. (…) That would be true, if that’s what it was. As a smart speaker, HomePod was much more expensive than the competition, and less smart.”

HomePod is a really great speaker with power bass, good spatial audio and stereo mode features, and support for Siri. But through the years, it didn’t age well.

First, Apple cut off $50 of its original price (first yellow flag). After that, the company gave a notable discount for employees before launching the HomePod mini (second yellow flag). Then, when the HomePod mini version arrived in 2020, and it was a success in its own manner, Apple decided to discontinue the original HomePod.

With HomePod and the iMac Pro now discontinued, what Apple could be waiting to say goodbye next?

What Apple could discontinue next from 2017?

There are two products that Apple could likely discontinue that were first introduced in 2017. The first one is the Apple Watch Series 3. After surviving five years as a mainline product, it could be replaced only by the Apple Watch SE later this fall, which is more powerful and could see a price drop.

With the S3 processor and only 8GB of storage, many customers complain that they want to download the latest versions of watchOS and they can’t because they don’t have enough storage left. The Series 3 wouldn’t be discontinued in dishonor, but I think it’s time for Apple to say goodbye to the product.

Another device that needs to receive a proper update is the Apple TV 4K. If Apple doesn’t launch a new model rather sooner than later, it may be next to say goodbye to customers, here’s why:

Since the HomePod was discontinued, it wouldn’t come as a surprise if Apple just discontinues the Apple TV 4K. A new model has been rumored for years, but we haven’t seen one yet.

Products that are worth mentioning

Looking back to 2017, we also have the MacBook Pro with the second generation of the butterfly keyboard. Of course, Apple didn’t discontinue the MacBook, but in 2019, the company finally went back to the older scissor mechanism, cleverly branded as the Magic Keyboard.

Apple introduced three generations of the butterfly keyboard and with each one of them, the company received bad press because of durability and performance concerns.

The MacBook Air also received a minor update in 2017, but it stock with the same non-Retina design. Luckily, Apple introduced a redesign to the line and in 2020 made the MacBook Air one of the first Macs with the M1 chip.

It’s also worth mentioning the second generation of the iPad Pro. Although it was a solid product, the Smart Keyboard is still one of the Apple products that give users headaches. At least until mid-2020, the 12.9-inch iPad Pro Smart Keyboard had a recall going on because the company couldn’t figure out how to fix the connectivity between iPad and Smart Keyboard. In my case, I had to go to the Apple Store three times over the years to return my Smart Keyboard and receive a new one.

As we can see, 2017 could have been a great year for Apple, but the company seems like it’s trying to forget it now. With no Apple Event to be announced just yet, is the company doing its spring cleaning before giving users new products?

What do you think? Tell us in the comment section below.