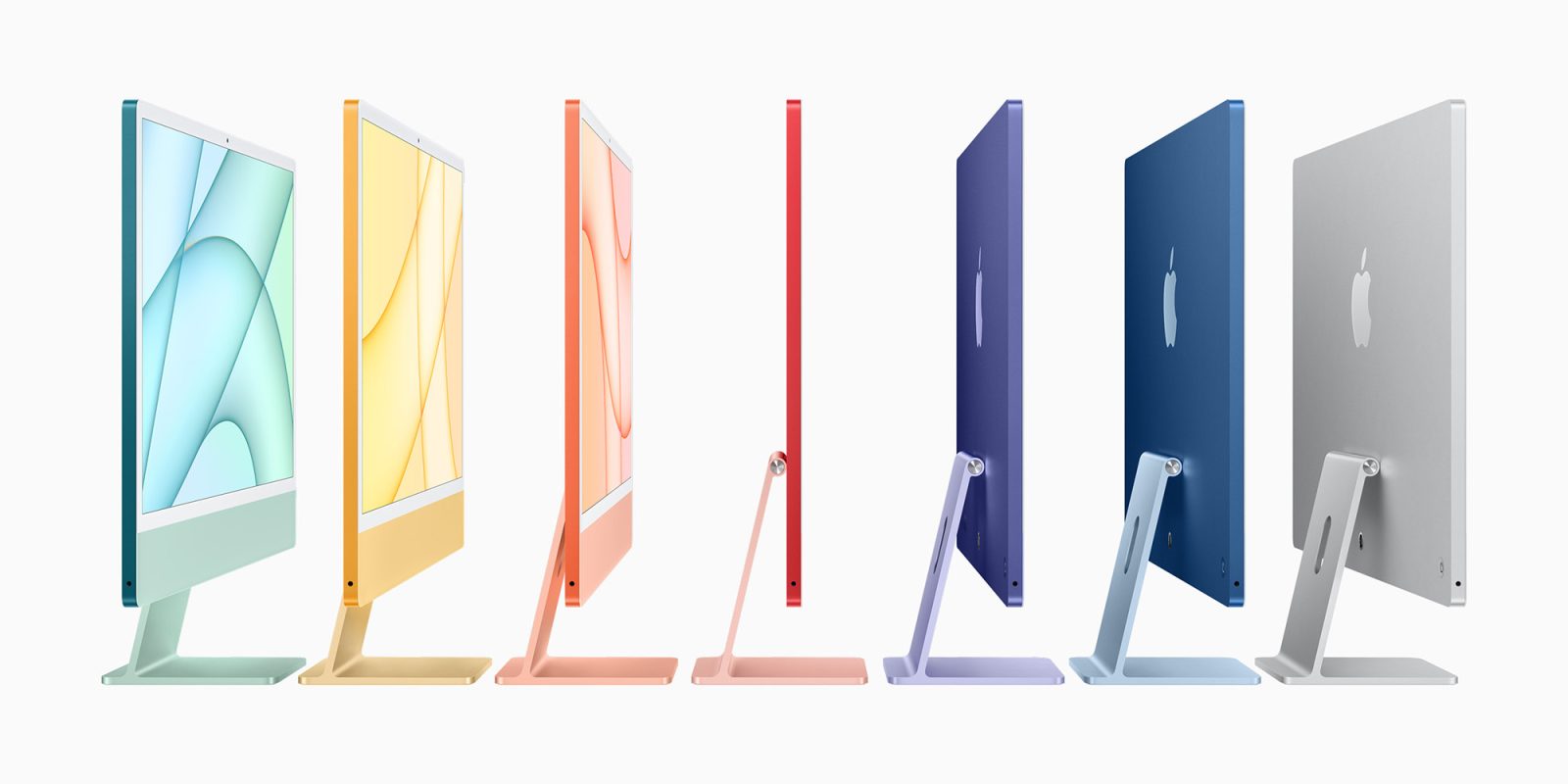 Ahead of the first orders arriving to customers on Friday, the early embargoed reviews have now been published. These reviews offer our first look at the iMac colors in the real world, as well as the all-new ultra-thin design. Head below for everything you need to know.

As expected, the performance of the new M1 iMac is similar to the previous M1 Mac mini, MacBook Pro, and MacBook Air. The Verge has some details on what exactly this means:

Another way to interpret these numbers is that I was getting effectively the same performance out of this machine as we got from the M1 MacBook Pro and the Mac Mini. That’s completely unsurprising, since these devices all use the same processor. But it’s a good proxy for gauging whether the iMac can handle your work: if you expect you could get a task done with the M1 MacBook Pro, you should be able to do it on this.

More anecdotally, I was able to use my test unit for all kinds of daily tasks, from emailing to YouTube to amateur photo and video work. I was able to hop between over 25 Chrome tabs with Cinebench looping in the background, with no stutter or slowdown whatsoever. If you’re buying the iMac for this kind of thing, I can’t imagine you’ll see too many spinning wheels.

Gizmodo sings the praises of Apple’s new 1080p web cam in the iMac:

I spend a lot of my time on video calls, as many of us do these days, and while I’m lucky enough to have a dedicated home office with giant windows, those windows face north. That means I get no direct sunlight. My overhead lighting is way harsh, which I could mitigate with a softer desk lamp or a ring light, but who has the energy for that. On the M1 MacBook Air’s 720p FaceTime camera, even with the M1’s improved image signal processor, I still manage to look both grainy and harshly lit. The Intel iMac’s 1080p front-facing camera upgrade last year was a huge improvement, but the new iMac’s 1080p lens with M1 ISP magic is doing god’s work. I look like I’m being lit on a movie set it’s so good. Even on a gloomy day with the harshest overhead lighting, the light in my office during a Google Meets call looked like it was diffused and, dare I say it, almost good.

If after a year and a half of living life on Zoom you’ve completely given up on looking good on camera, well, that’s fair. This 1080p lens might be a little too improved in that case. But I love it.

I opted for the orange iMac for our review, but Apple should have probably just called it creamsicle. It has a bit of a pinkish hue along the “chin” below the screen, while the rear case looks more distinctly orange. And despite the playful aesthetic, the iMac still looks and feels like a premium device. I particularly like the way light bounces off the back of the sturdy base. The iMac hasn’t had this much Pixar-esque energy since the days of the lampshade G3. Hell, Apple could still benefit from following some design ideas from that long-forgotten machine — or maybe I’m just the only one that misses being able to adjust my screen vertically.

Writing at Six Colors, Jason Snell has some good descriptions of what it’s like to work on a colorful iMac, particularly with the white bezels:

But when you sit down to work at the iMac, you get a different impression. The bright color is there, visible on the stand. Above that is a more muted version of the accent color on the “chin” beneath the display. The bezels around the display itself are a neutral gray. It’s effectively a gradient, with your peripheral vision noticing the bright color, but that accent fading away until you’re left with whatever is on the display itself. It works really well, though I imagine that if you’re someone who prefers using Dark Mode in brightly lit rooms, it will be a pretty dramatic contrast. (I’m a Light Mode person myself, and I found the overall effect quite harmonious. But then, my office wall is orange.)

CNBC writes that it’s a no-brainer to upgrade to the Touch ID-equipped Magic Keyboard for the new iMac:

The new Magic Keyboard, which matches the color of the computer you buy (as does the mouse) can be configured with a Touch ID fingerprint sensor for $50 more. You should do that while buying the iMac. It’s really convenient for making purchases (like you would on Apple’s laptops), for logging in in a split second, or for sharing a computer. Each family member just registers their fingerprints and then they can tap it to log in to their account when they jump on the computer.

Pocket-Lint notes that the stand on the iMac is still not adjustable, which made them have to place it on a book to raise it up slightly:

The L-shaped stand from the old iMac remains, but it is lower and it now accommodates a larger Apple logo on the back which reflects the light so it looks like it illuminates (it actually doesn’t light up, it just fooled us at first).

Notice that the logo has disappeared from the front, which we still think is a little bit of an odd choice, but then there’s no Apple logo in front of you when you’re using a MacBook, iPad or iPhone (yes, we know, there’s one in the top corner on macOS).

The iMac’s stand isn’t height adjustable, which is a downside. We ended up standing our review model on top of a book to raise it up slightly on our desk.

TechCrunch on the new power brick with ethernet:

The big update to the power cable situation is, of course, the addition of ethernet to the brick. The brick is quite a bit larger — especially if you’re accustomed to dealing with MacBooks. But likely it will be out of the way. What it does bring is the removal of some additional clutter on the back of the system and helps keep the computer itself that much thinner. For most people in most cases that can access a hardwired connection, it’s a nice addition.

The Wall Street Journal wraps it all up nicely:

In that sense, the iMac’s evolution into the future—and into the family of iPhones and iPads—isn’t quite done. I look forward to the iMac review of 2030: The friendly, fun home computer is thinner than paper, has zero ports or cords and can beat a 2020 super computer at any task. Strangely, it still has a mouse that must be flipped over to be charged.

And CNET has some buying advice for M1 iMac customers, recommending most people go with at least the $1,499 base model.

If you’ve never had an iMac before and are considering switching from a laptop to an all-in-one desktop, I can see the appeal for an ongoing work-from-home situation. You get a lot more screen space in a very small footprint. At $1,299 to start, it’s a hefty premium over the MacBook Air for essentially the same machine, just with a larger screen and a stand (and without a battery). Still, if you’re considering it, I recommend starting with the $1,499 base model, which adds the TouchID version of the keyboard, two extra USB-C ports, the eight-core GPU and better cooling as well as an Ethernet port built into the power supply. Just be sure to choose a color that best reflects your celebratory, (almost) post-pandemic feels, and get a head start on your hot Mac summer.