Before the Genius Bar: Behind the retail designs that paved the way for 20 years of Apple Stores 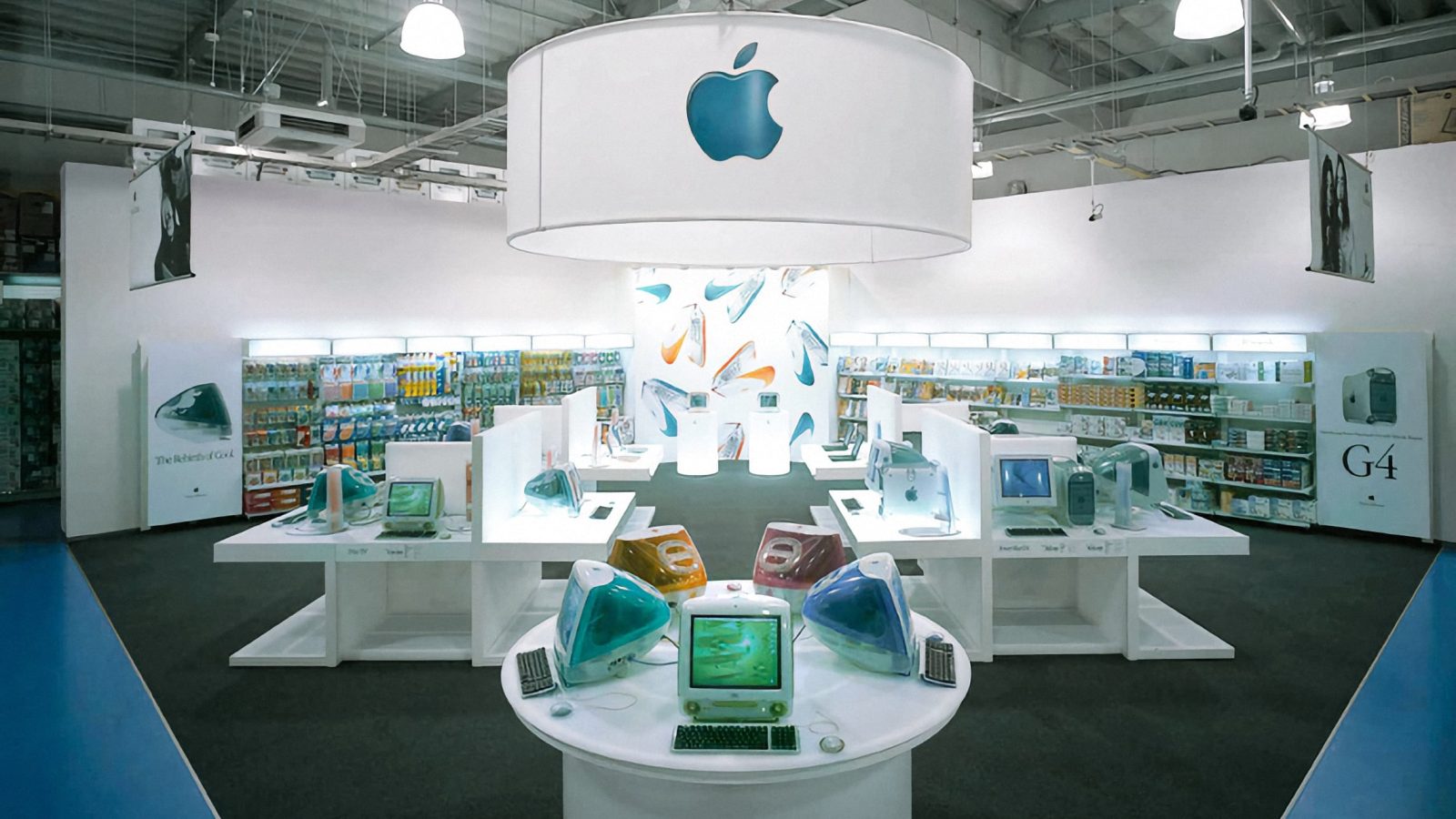 When the first Apple Stores opened their doors twenty years ago this week, it wasn’t Apple’s first step into brick and mortar retail. Nearly four years earlier, Apple began a program to reimagine how Macs were sold. That desire to improve the customer shopping experience ultimately led to the Apple Store you love today.

🎈 This is the final installation in a four-part series celebrating twenty years of Apple Stores. Read more feature stories and special content at the links below.

“I’ve gotten over 1,000 emails by people telling me how bad the buying experience has been at some of these big national resellers,” Steve Jobs told an audience at Cupertino’s Flint Center on November 10, 1997. He was explaining the thinking behind a recently announced partnership between Apple and electronics retailer CompUSA that would put an Apple “store within a store” inside every CompUSA Superstore.

For years, Macs had languished on the shelves of resellers, overlooked and unkept by salespeople without Apple expertise. A poor buying experience was driving customers to Windows PCs. Alongside the new Apple Online Store, carving out a dedicated space inside every CompUSA with Apple-trained employees was part of Apple’s plan to right the ship.

The first CompUSA Apple store within a store was installed in Pleasanton, California in late 1997. Fifty-four more locations were added by Thanksgiving that year, and the rest of the stores were completed in early 1998. Steve Jobs gave a tour of the first location using QuickTime VR:

“It was a baby step into retail, but one that was NOT universally supported in the company,” says Michael Dolan, Founder and Principal of Standard Studio. “Steve didn’t like it, and he told me so with ‘colorful’ language.” Michael’s involvement with Apple began when he was a Partner at Eight Inc., the creative collective Apple hired to design environments for events like Macworld Expo.

The first Apple store within a store designs were firmly planted in the 90s, with six-color Apple logos and text-heavy displays. But Apple was transforming and emerging with a new aesthetic driven by the clean lines and bright colors of the iMac G3 and iBook. The Apple Marketing Communications team brought in Eight Inc. to start a new program.

“The initial shop-in-shop concepts were very much based on the language we developed for the launch of the colored iMacs at Macworld,” says Mark Little, Former Principal at Eight Inc. Mark worked at Eight Inc. until 2017 and was a Senior Designer during his time on the first Apple projects.

In 1999, Apple quickly rolled out the first revamped store-in-store concepts, launching at more than thirty shops in Japan in just six months. Retailers Mac Station, Compmart, Sofmap, and OA System were among the first partners. The spaces were minimal and white, with pure geometric forms and light boxes. The product was always the “hero.” Using learnings from Japan, Eight Inc. evolved the retail design language for the U.S.

“We opened CompUSA San Francisco at the very end of the Japan exercise, says Winston Wright, Principal of consulting firm Whispering Loudly. “It actually opened Black Friday that year. The next January, CompUSA on Fifth Avenue [in Manhattan] was opened.” Winston was the Senior Marketing Manager of Worldwide Retail Marketing at Apple in 1999.

“[The stores] were their own real estate with a floor covering change and a wall covering change,” says Winston. “The space was stand-alone in each location.”

Inside CompUSA San Francisco at the corner of Market, Ellis, and Stockton streets, Apple hung floor-to-ceiling “Think Different” posters and placed gleaming pedestals in the windows adorned with candy-colored Macs.

“Steve had an amazing ability to bridge the perceived gap between technology and the human, and to redefine the conversation around technology to make it about how it fits into your life, as opposed to how fast the CPU is,” says Mark Little. “If you think about those early Apple Stores, and even the store-in-stores before that, or the Macworlds even before that, you can see the genesis of this shift.”

But a presence at resellers wasn’t enough. “Steve thought store-in-store was a bad, half-baked idea,” says Michael Dolan. “He believed that the control required to achieve true differentiation in retail would be impossible with partners. He was (mostly) right.”

“Right after we opened CompUSA San Francisco, Ron Johnson came aboard, so by then the path for owned retail was envisioned,” says Winston Wright. “The owned stores were a totally different visual iteration of what the store-in-store concept had been.”

Apple and Eight Inc. began developing the first Apple Store concepts in a warehouse space in Cupertino. Learnings from the CompUSA project informed the early designs, Mark Little says. “The mockup space was invaluable for developing early concepts, testing low-fidelity mockups, and eventually prototyping the details found in the first Apple Stores. I believe we worked for almost a year and a half in this way, eventually perfecting what was essentially a working Apple Store.”

Early Apple Stores were organized to highlight solutions — what can you *do* with a Mac? Clearly labeled sections divided by glass partitions focused customers on a few key messages. “At that time there were quite a few third-party peripherals and software in the stores, so balancing that in a way that felt supportive of, and not competing with, the Apple products was key as well,” Mark Little says. “We helped this perception by placing the product as hero in each of the areas, while the supporting cast of characters was clearly articulated as supporting elements.”

Solution-oriented merchandising was a carryover from the CompUSA days, where third-party hardware was displayed alongside Macs. Presented with a larger canvas, Apple could fully realize the concept, explains Winston Wright. “The messaging format certainly changed with the owned stores having the opportunity to do those giant graphic panels. As for product messaging at the point of product, what was learned in the store-in-store locations certainly informed the forward design iteration for the owned stores.”

More than twenty years since Apple first set out to reimagine brick and mortar retail, the ethos has endured, says Mark Little. Apple Stores today bear little resemblance to the concepts Eight Inc. first dreamed up, but the way customers engage with people and products still achieves a balance between humanity and precision. “I think that is one of the most interesting aspects of the history of Apple Retail, from our original design of the Macworld hall for the launch of the colored iMac to the latest flagship designs. There have been hundreds, perhaps thousands of people involved in the designs. But that original DNA is still there in the end, as if there was one guiding hand — and in many ways there was.”