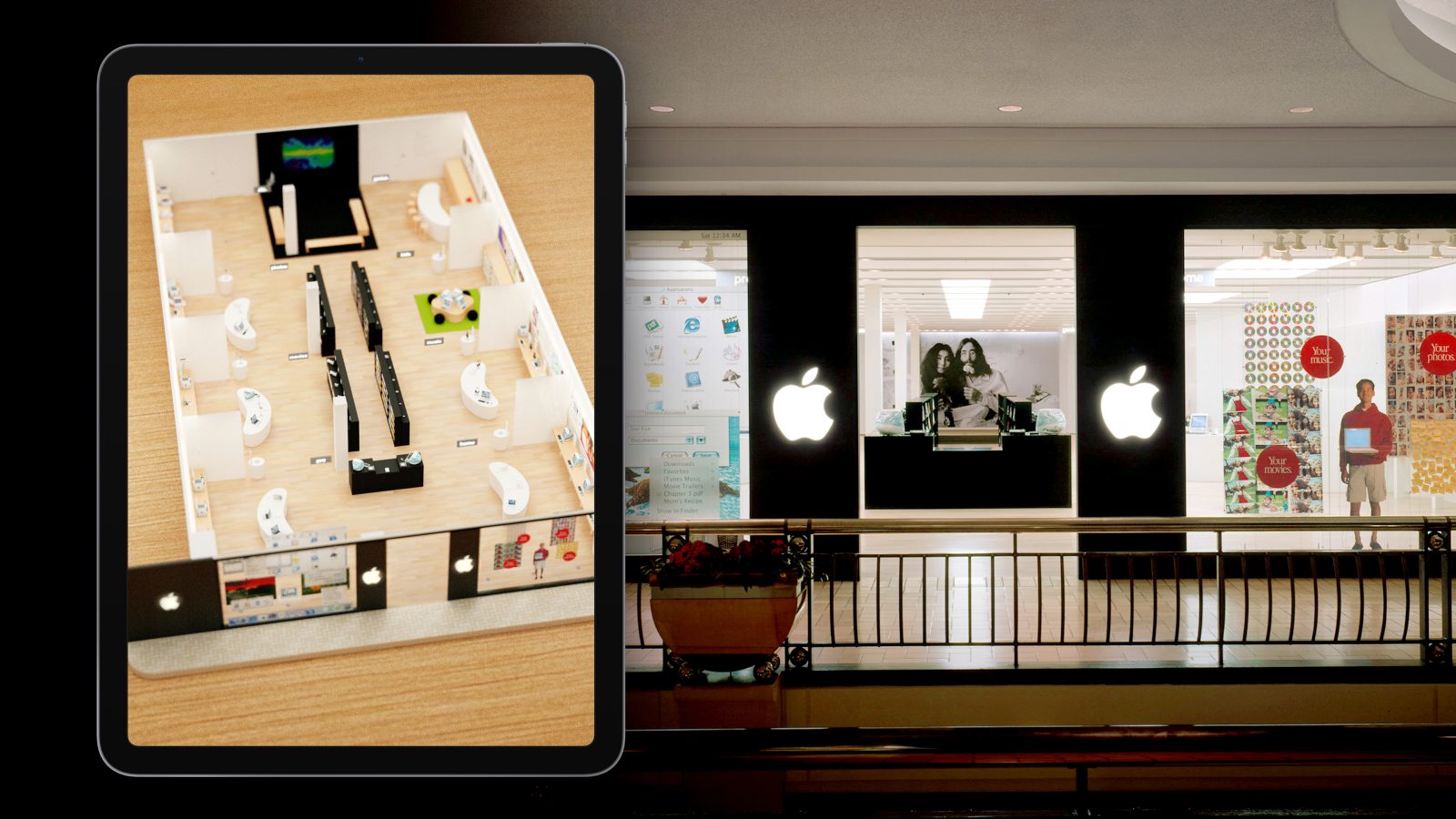 On May 19, 2001, Apple opened its first two retail stores in Tysons Corner, Virginia and Glendale, California. Now you can revisit the world’s first Apple Store exactly as it appeared twenty years ago on grand opening day through an interactive augmented reality experience.

🎈 This is part three of a four-part series celebrating twenty years of Apple Stores. Read more feature stories and special content at the links below.

Ahead of its grand opening, Steve Jobs recorded a video tour of the first* Apple Store, walking through the aisles of Apple Tysons Corner.

The augmented reality model below represents a painstaking reconstruction of that original store, from the number and color of Macs on each table to the third-party software titles on the shelves. Artwork on the walls and window displays are true to the era. The model is designed to be as accurate as possible within the parameters of available information.

Tap on the button below in Safari on an iPhone or iPad to launch the model (17MB) and tap “View” when prompted. Place the model on a table to explore in as much detail as you’d like, and learn more about the store design below.

Optimized for A12 and newer devices.

Instead of large wooden tables and stone floors, Macs were displayed on white Corian tables shaped like kidney beans. Merchandising in each section of the store highlighted solutions and products that worked great with Mac OS X, like digital cameras, camcorders, and MP3 players. How do I edit photos from my digital camera on a Mac? How can I create a home movie in iMovie? What software is available for kids?

The etc. section housed accessories like printers, keyboards, and cables, and the Genius Bar was located in the corner, not centered at the back like in later Apple Stores.

More than three hundred third-party boxed software titles were arranged on two rows of black shelving spanning from a checkout kiosk near the front of the store to the Theater in the back. In the Theater, Apple hosted Workshops, software demos, and sometimes iTunes visualizers on a 10-foot projection screen. Larger stores often welcomed musicians and creative experts to the Theater for live events.

“If that person doesn’t know the answer, they’ve got a hotline to call us in Cupertino at Apple headquarters, where we have somebody who does.”

When Steve Jobs introduced the Genius Bar, he picked up a classic red rotary phone on the back counter. All of the earliest Apple Stores were outfit with a similar red phone, ready and waiting as a lifeline for Geniuses with a vexing technical issue.

You won’t find a Cupertino hotline in today’s Apple Stores, but using the augmented reality model above, you can put the same red phone Steve Jobs picked up on your counter. Open this page in Safari on an iPhone or iPad.

Volume up! Give it a ring and take a close look. You never know who might answer.