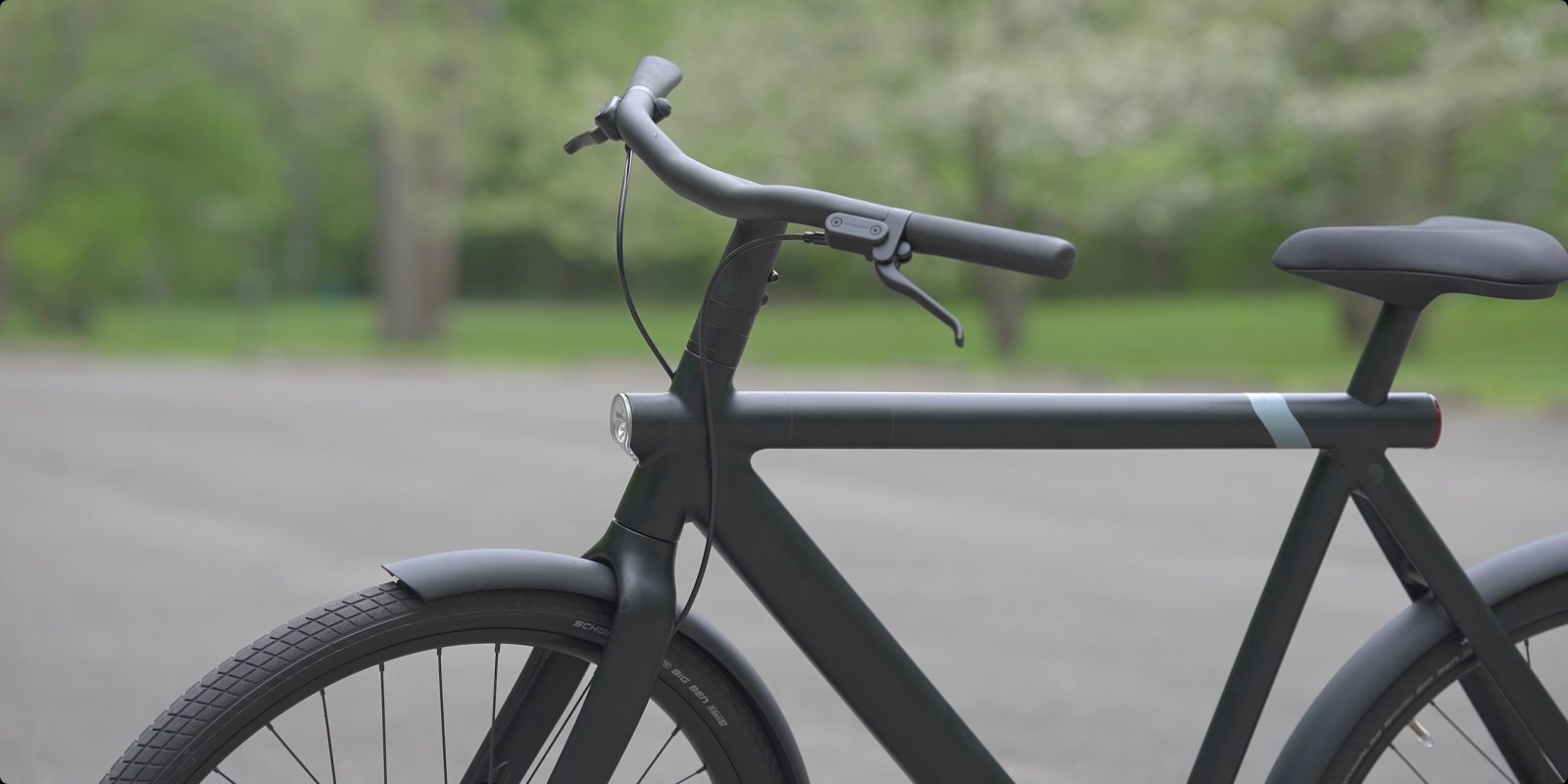 VanMoof first came on my radar when Apple announced the first few products that were compatible with the Find My network. Of course, this announcement came a few weeks prior to Apple unveiling its long-awaited AirTag tracker, which also utilizes the Find My network. The VanMoof S3 and X3 joined the likes of Belkin’s SOUNDFORM Freedom True Wireless Earbuds and the Chipolo ONE Spot item finder as the first third-party with built-in Find My integration.

And while I was initially most excited to learn how Find My would work with a bike, the VanMoof S3, with its sleek black exterior, simple lines, and uber-clean weld seams, had me wanting one to call my own. Watch my hands-on video as I take the VanMoof S3 for a ride around the block, and be sure to subscribe to 9to5mac on YouTube for more.

Video: VanMoof S3 – it’s like if Apple made an e-bike

The first thing that stood out to me upon receipt of the VanMoof S3 is how the bike is packaged. It’s packed carefully in such a way that not only protects the unit from damage during shipping but also makes the bike easy to set up.

The S3 sides out of its shipping box, revealing a bike covered in foam protectors kept in place via environmentally-friendly reusable zip ties. From there, it’s just a matter of removing the foam and attaching the front wheel, handlebars, and pedals.

Putting together the S3 took about 30 minutes in total. For the most part, the installation was easy thanks to the step-by-step instruction manual and included toolset. The only part that gave me a bit of trouble, connecting the power cable to the front wheel hub motor, occupied the vast majority of the setup time.

Based on the pictures on its official website, I was pretty sure I’d love the design of the bike, and I wasn’t disappointed. Simply put, the design of the VanMoof S3 is the best that I’ve ever seen in a bike, electric or otherwise.

The S3 stood out like a sore thumb (in a good way) when compared with other electric bike options available at my local bike shop. The large battery packs that rested on the down tubes of all of the e-bikes on display were dead giveaways, as were the over-engineered buttons, gauges, and conspicuous design language.

The VanMoof S3, on the other hand, takes the exact opposite approach. In fact, if you didn’t already know it was electric, you’d be hard-pressed to tell until you tried to ride it. There’s even an inconspicuous LED matrix display integrated directly in the top tube for displaying power levels, battery status, etc. The design is extremely clean, with pristine weld seams between the tubes and seat stays that reiterate the attention to detail given to build quality.

After setting up the bike, you’ll need to download the VanMoof app from the App Store and set up your account. Your iPhone (or Android) essentially acts as a key and a means to control the various settings associated with your bike profile.

The app is broken down into several pages. Location shows your bike on a map, and the Settings page contains preferences for power level, gear shifting, lights, horn sound, touch to unlock, auto wake up, etc. Settings is where I found myself most of the time while using the VanMoof app.

Being one of only three third-party products initially compatible with Apple’s Find My network, this was the feature that initially put the VanMoof S3 on my radar. For a bike this expensive, it’s a great idea to have location tracking built-in, and the Find My network, which leverages the existence of over 1 billion iPhones, makes a lot of sense to have on a bike.

To enable Find My support, you’ll need to double-press the power button on the underside of the bike’s top tube, and you’ll hear a chime indicating that the bike is now discoverable via Find My. Open the Find My app, go to the Items tab, and tap Add New Item → Other Supported Items. The Find My app will then discover the bike, allow you to give it a name, and associate the bike with your Apple ID for tracking within the app.

While third-party Find My-compatible devices don’t enjoy the precision tracking made possible by the Ultra-Wideband chip found in Apple’s AirTag, such a technology would be relatively pointless in a device that’s as large as a bike. If you’re in a situation where precision tracking would come into play, chances are you’d see the bike well before you got close enough to touch it.

Locking the VanMoof S3 literally takes just a few seconds, thanks to the built-in kick lock on the rear wheel. Once the bike is locked, you’ll hear a confirmation sound emitted from the built-in speaker. Locking the bike automatically prevents the bike from being ridden and will also enable the integrated security alarm. For convenience, the bike features auto unlock when you come close to it with your Bluetooth-enabled iPhone. You can also input a 4-digit passcode using the left handlebar button to unlock the bike manually.

If you try to move or ride the bike while the alarm is enabled, you’ll receive a loud warning tone with a skull logo on the matrix display. If you fail to heed the warning, a fairly loud alarm will sound, along with a flashing taillight and headlight. This, coupled with the fact that the bike’s wheels are locked, should function as a legitimate theft deterrent.

As someone who has never really had any meaningful hands-on time with an electric bike, I was unsure about the experience going into my hands-on with the S3. But in Apple-like fashion, I found the VanMoof S3 easy to learn.

The bike can be ridden just like any normal bike, although it is quite a bit heavier than a normal bike at just over 45 pounds. As long as the bike is unlocked, you can just hop on and start riding. For a casual like me, that’s important because sometimes I just want an experience that’s similar to a regular bike.

Of course, the benefit of an electric bike is the powerful hub motor that assists your pedaling. The VanMoof S3 does this in a very natural way, with the front-mounted hub motor assisting with just a faint whirring sound. Speed levels 1-4 provide an incremental increase in power and can be changed within the app or directly from the bike by holding the turbo button while parked. As you pedal, the VanMoof S3’s motor provides assistance, which can help you to easily power up a steep hill or quickly speed off on a straightaway.

What’s even more remarkable is the four-speed e-shifter, which eliminates the need to manually shift gears. The e-shifter works in concert with the Smart Cartridge integrated inside the top tube to control all onboard systems and processes real-time motor feedback to ensure responsiveness and efficiency.

Along with being able to display your battery status, the matrix display, located near the front of the top tube, displays your current speed in miles per hour as you ride. The display also is where you’ll see the various speed levels that you alternate through.

While the general speed assistance levels are great, they’re pretty much what I expected going into this review. The four speed levels will help you, in a very linear way, pedal up inclines with very little effort.

But nothing was as fun as using turbo boost, which sort of reminds me of the type of instant torque and acceleration that you get from an electric car. I had the most fun when using the turbo button because it allowed me to catapult ahead from just a couple of miles per hour to 20 miles per hour in just a few seconds.

The Turbo Boost button is located on the right handlebar, and pressing and holding the button while pedaling will provide enough torque to power you up the most daunting of inclines without breaking a sweat. I found myself, over and over again, holding the Turbo Boost button as I rode around, even on flat surfaces. It’s by far the most compelling part of the riding experience and will quickly put a smile on your face. There are plenty of practical applications for turbo besides tackling inclines, but one that made the most noticeable difference to me is boosting while riding directly into headwind. Needless to say, I was undeterred.

Depending on the power level used, the VanMoof S3 is rated between 37 and 93 miles of range. If I owned this bike, that would be more than enough range for me, even on the low end. But if you’re someone who commutes on a regular basis, perhaps back and forth to work, then range is a bigger issue.

The VanMoof PowerBank is a $349 add-on that straps to the bike and plugs directly into the bike’s power input, charging the S3’s built-in battery. While this can be used to extend the range of your bike if you already have a full charge on the internal battery, it can also be used as a means to recharge the bike’s battery without needing to lug it up a flight of stairs.

While the PowerBank will no doubt be handy for those circumstances, I personally think it subtracts from the subtle and sleek design of the S3. Don’t get me wrong, it still looks gorgeous, but it’s one step closer to the look of the bikes in the bike shop that I mentioned earlier. The good news is that the PowerBank is an add-on, and it can easily be removed when not needed.

As an avid Electrek reader, I’ve seen lots of electric bikes pass by my timeline, but this is one of the first that really caught my interest from a design perspective. Not only is the design of the bike good, but it rides like a dream. Granted, I’m about as casual of a bike rider as it gets, but it was hard to keep the smile off my face while riding the VanMoof S3, especially when pressing the Turbo Boost button.

But design and performance are only half the story. The VanMoof S3 also features integrated security features, like the built-in kick lock, alarm, and of course, Apple Find My integration. If you’d like to know more, be sure to read 9to5mac’s Ben Lovejoy’s hands-on experience with the S3 as well.

You can purchase the VanMoof S3 for $2,198. While that’s a far cry from being mere pocket change, it’s actually quite competitive in the e-bike market. What do you think? Do you think Find My integration in a bike makes sense? Sound off down below in the comments with your thoughts.