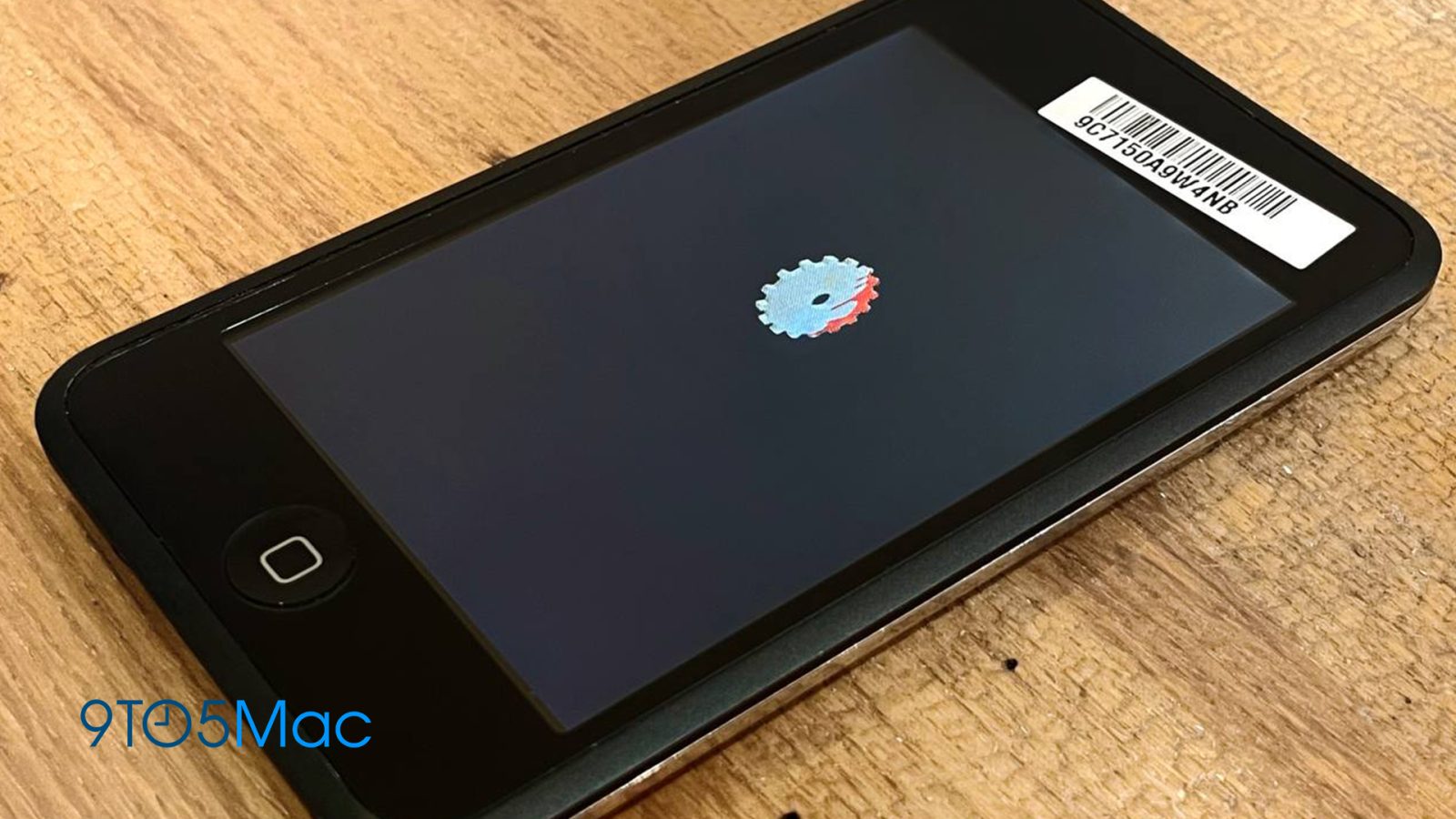 You’ve probably seen multiple photos and videos of prototype Apple products floating around the internet, and some of them are quite interesting as they reveal features that were scrapped from the final devices. The stories behind these prototypes are usually unknown, but 9to5Mac has been able to learn more about a specific prototype of a first-generation iPod touch that was built before the iPhone was even introduced.

I talked to Giulio Zompetti, who is well known on Twitter for his huge collection of prototype Apple products that includes dozens of iPhones, iPods, iPads, Apple Watch, and even a functional AirPower unit. However, we are here to talk about a rare prototype of the first-generation iPod touch, which was officially announced in 2007.

Zompetti says that this iPod is one of the prototypes that he never wants to sell, as he considers it a special device. First, it is impressive how preserved this iPod is. For a product that was built over 14 years ago, it amazes me that it barely has any scratches on it. I own a first-generation iPod touch (not a prototype), and its rear is nowhere near as shiny as this internal model.

Looking from the outside, the iPod prototype looks the same as the model that was introduced in September 2007 by Steve Jobs. For those who don’t remember, the iPod touch came a few months after the iPhone launch as a cheaper alternative for those who wanted at least some of the experience of Apple’s smartphone, which included the multi-touch display, built-in Wi-Fi, Safari web browser, and the iTunes Store.

The prototype owned by Zompetti, however, has its own personality. It was built long before the first iPhone hit the stores, and it runs software dating back to April 2007. But before getting into details about the iPod internals, I needed to ask how he obtained this and other prototypes.

Zompetti explained to me that most of these prototypes are discarded by Apple once the tests are completed. Since these devices were only made for internal testing purposes and contain special software, the company tries to destroy the prototypes before sending them to e-waste disposal. This iPod touch was found with some faulty internal connectors and without the internal battery.

When Zompetti got the prototype, he put in a new battery and fixed those faulty connectors himself. According to him, prototypes that are discarded while working are usually restored by people who find them in the e-waste disposal. If you plug one of these into a Mac, it is recognized as a normal device, and then you can install a stock version of iOS on it. The absence of the battery is what made this iPod remain special all this time.

The iPod touch prototype comes from the Pre-EVT stage, which is the “Engineering Validation Test” — one of the first stages of product development. At this stage, the company checks if the hardware works as expected with a software designed to test things like the touch screen, speaker, antennas, and accelerometer. In other words, this is probably one of the first iPod touch units made by Apple.

Internally, this iPod touch features a red logic board, which is something Apple does to identify its prototypes.

When it comes to “Switchboard,” which is this special software used by Apple in prototypes, it is not exactly a different operating system. In fact, it is just a basic version of the iPhone operating system without the icons and other things you are familiar with. By using some special commands on a Mac, it is possible to take a closer look at the internal files stored in the iPod, and they reveal even more interesting things.

Surprisingly, the iPod touch prototype runs OS X! If we go back to January 2007, Steve Jobs said that “iPhone runs OS X.” Although they are different systems, iOS was built on top of the core of Mac OS X (now called macOS), and Apple hadn’t defined a specific name for the iPhone operating system at the time.

After the launch of the iPhone, Apple changed the name of the operating system to “iPhone OS,” which was also used for the iPod touch that came later in that year. However, the operating system of the prototype iPod is still named “OS X,” as seen in the internal files. Another interesting thing is that this prototype is the only one known to have a dual-boot system with two parallel system installations, but the reason is unknown.

The iPod can be booted on the Switchboard software, and it shows a “bloody gear” logo while booting up, which is also a rare element among Apple’s prototypes (usually, there’s just a regular gear with no details).

Since Apple always wants to avoid leaks or any associations to leaked products, this iPod touch (as well as other first-generation, extremely early unreleased devices) does not have an Apple logo, the iPod brand, or anything that references the company. It is easier now to look at this and identify that it is an iPod with internal Apple software, but this would not be the case if one of these leaked at the time.

Another interesting fact about this iPod touch prototype is that the unit was discarded with its “passport,” which is a document used to report on which tests the prototype passed or failed. You can see in the image below that this iPod unit failed a test called “plum calibration.”

One of the coolest things that Zompetti shared about his prototypes is that he was able to find out who was the engineer at Apple responsible for one of the units he obtained — thanks to some information that was printed on the labels that come with the prototype. They even got in touch, and it was confirmed that the iPod unit was rejected for failing one of the internal tests.

If you’re interested in learning more about Apple prototypes, be sure to check out Giulio Zompetti’s Twitter profile.