Just for fun: What if Apple had made Mac OS-based smartphones, tablets, and watches in the ‘90s? 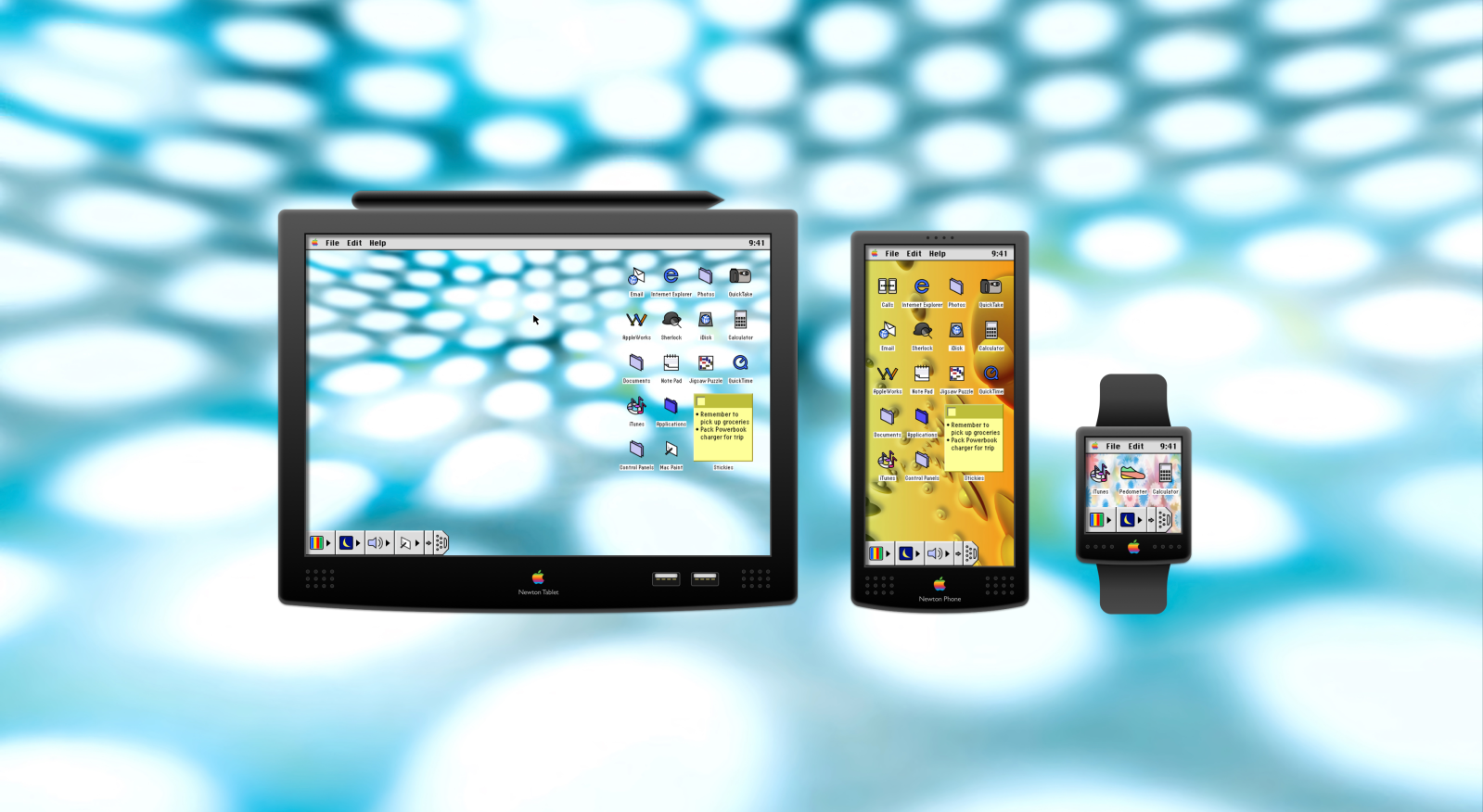 I often wonder what things would have looked like at Apple if major events hadn’t occurred. Lately, I’ve been thinking a lot about classic Mac OS and old-school small gadgets. So naturally, the question arose: “What if Apple kept making Newtons and what if they ran Mac OS?” Well, if you’re now wondering the same thing, keep on reading.

I started off imagining what iOS would look like in classic Mac OS style. I kicked things off stylizing iOS with the platinum design and ultimately decided to meld it with classic Mac OS user interface elements. The project became a mobile version of Mac OS 9 otherwise known by its codename, Sonata. I chose to call the software “Mac OS 9 To-Go” and wanted to see what it would look like on a 90s PDA/smartphone. It led to the first product, the Newton Phone.

Mac OS To-Go includes a few special things that phones certainly wouldn’t have had at the time. It integrated with iTools, Sherlock, iDisk, and other web-based protocols. It can print directly to Apple LaserWriter printers and has a built-in QuickTake camera system.

The user interface has the familiar menu bar at the top, albeit simplified for mobile usage. Icons are arranged in an iOS-style grid, while the dock is replaced by the control strip. You can see several old Apple applications on the desktop, including AppleWorks, QuickTime, Sherlock, iDisk, Note pad, and iTunes. The control strip lets you change the display brightness and color, turn on sleep mode or do not disturb, and change your volume output and input settings. The wallpapers I used are all from 512 Pixels, where Stephen Hackett optimized all of the classic Mac OS 9 wallpapers for 5K displays.

I added some new things, like a “Calls” application. Mac OS 9 obviously wasn’t made for phones so there was no phone application. I designed it with large, easily perusable buttons. It follows the same layout as Apple’s keypad dialer in the iOS phone app.

Mac OS To-Go also includes “legendary Apple ease-of-use,” so unlocking the device is as simple as pressing the Apple logo button below the display. And if you’ve used a Mac, you’ll know exactly how to use Newton Phone.

Newton PDAs and eMates came in a single black/dark green color back in the day. But for Newton Phone, I wanted to imagine three colors that are reminiscent of the current iPhone lineup we know today. I designed three models: a beige one (gold), a silver one, and a black one that looks like a traditional Newton.

Above the display is a speaker that can go right up to your ear and below the display are two microphone arrays. One on the left side if you are talking on the phone with your right ear and one on the right side if you are using your left ear. This is so folks on the other end always get consistent and decent audio.

Once I was finished designing the Newton Phone, I thought to myself, “hey why not try a watch too?” So yes, here’s what I imagine a Newton Watch to look like. It has an optimized version of Mac OS To-Go with some additional applications and a more condensed user interface.

First thing’s first, I’ve added a Pedometer application that can sync with your Newton Phone. You can also manually add and remove steps if the pedometer is inaccurate for some reason. I also added Apple-designed watch faces. You can see one with the Finder face above that uses Apple Garamond for the numbers around the dial.

The hardware here includes a magnet that lets you attach the pen to the top of the Newton Tablet. Below the display you can see two speakers, one on the left and one on the right. On the right side, you can see two USB ports. On the back of the Newton Tablet is a Surface-style kickstand. You can prop the device up and connect a USB mouse and keyboard to the tablet for use at a desk.

So that completes an imaginary lineup of Newton devices, inspired by modern products — each one running the same conceptual Mac OS 9 To-Go operating system. I chose to give each one an insanely high price point, given that back then new gadgets cost a pretty penny.

What do you think about the Newton Family with Mac OS 9 To-Go concept? Let us know in the comments below.