MacBook Air vs MacBook Pro: Which should you buy? 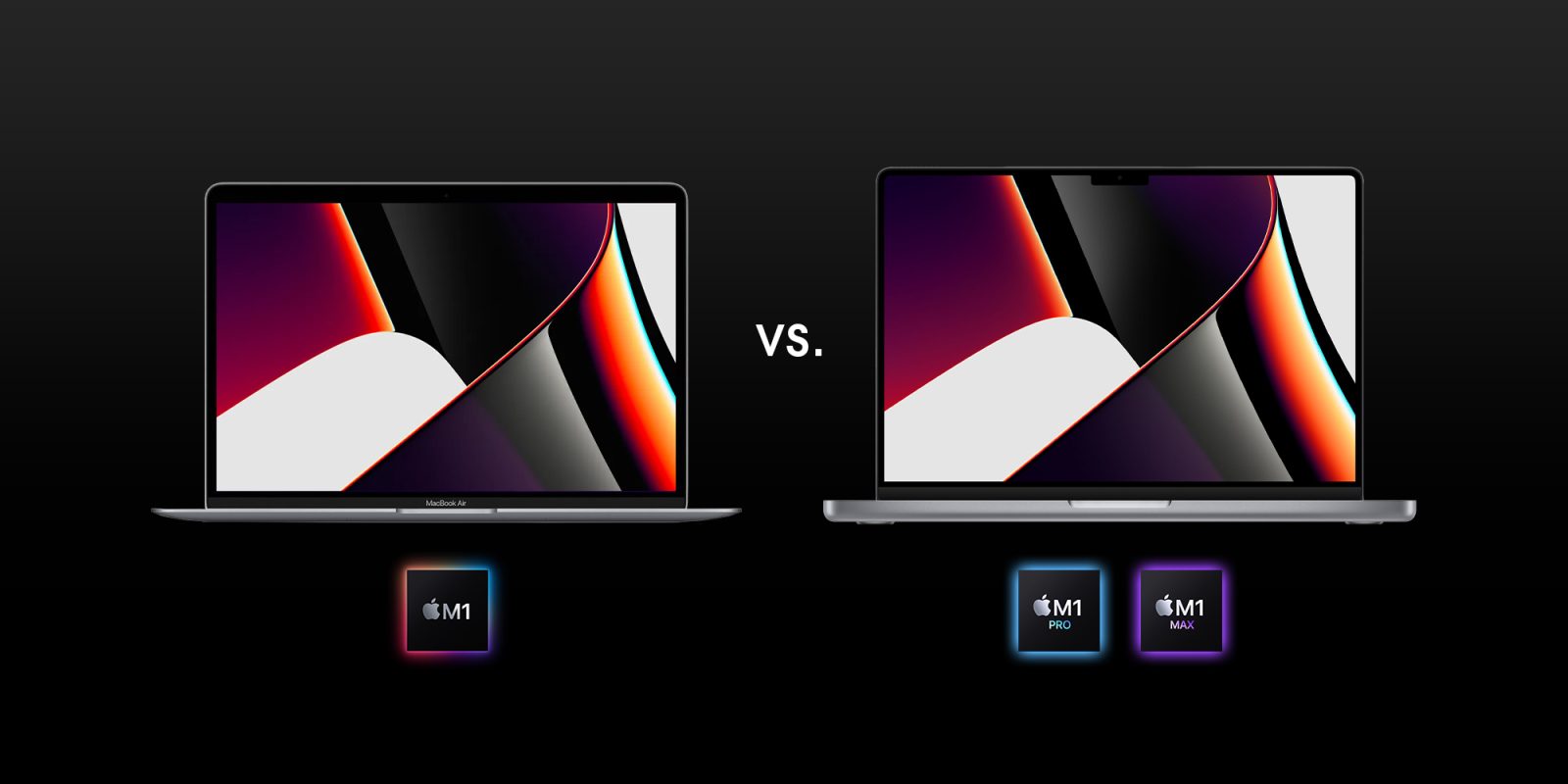 Apple’s MacBook lineup offers impressive performance and at first glance, the 2020 MacBook Air and 13-inch MacBook Pro seem quite similar. They have the same CPU/GPU, same ports, same FaceTime camera, and more. However, let’s take a closer look at the MacBook Air vs Pro to see what differentiates the two and help you decide which to buy.

Update 11/1/21: The all-new 14 and 16-inch MacBook Pro notebooks are here. Beyond the larger screens, they feature a refreshed design, mini-LED display backlighting, the return of I/O including HDMI, SD card slot, and MagSafe, and the removal of the Touch Bar.

And of course, they have more power than ever with the M1 Pro and M1 Max chips. If you’re on the fence between the 14 and 16-inch MacBook Pro, check out our detailed guide.

Initial reactions to Apple unveiling the new M1 MacBook Air and MacBook Pro in late 202 included confusion about the point of continuing to offer both since they appear so similar.

While it is impressive and somewhat confusing that the $999 base M1 MacBook Air has the same CPU/GPU and neural engine as the $1,299 and higher M1 MacBook Pro, there are some notable differences that are worth considering before making a decision.

And now with the new 14-inch M1 Pro/Max MacBook Pro available there are even more differences.

You’re getting the powerful and efficient M1 chip with 2020 MacBook Air and Pro machines with 4 high-efficiency cores and 4 high-performance cores for the CPU. But interestingly enough, it’s actually a 7-core GPU on the base MacBook Air models instead of the 8-core on the higher end Air configurations and all the MacBook Pro models. My colleague Ben Lovejoy wrote an explainer on what’s happening with that.

Beyond the slight GPU difference, you’re getting active cooling with the MacBook Pro. That’s notable as it allows the notebook to sustain high performance under sustained loads for longer.

For the 14-inch MacBook Pro, you get the M1 Pro or M1 Max chip with the option for more CPU and GPU cores, increased RAM, full HD 1080p FaceTime camera, and more.

Maybe more minor in the big picture, but both MacBook Pro models features high dynamic range with stereo speakers and the mics are “studio-quality.”

It’s great to see Wi-Fi 6 support all models. However, it’s just a 720p FaceTime camera on the 2020 MacBooks. Apple says it’s improved the image quality with its image signal processor. But to get the full HD 1080p FaceTime camera, you’ll need to buy the new 14-inch MacBook Pro.

You’re going to see awesome performance for everyday computing with all three of these computers but if you lean toward heavier workflows, the new MacBook Pro is the winner.

If you have medium to light workflows, the MacBook Air is a great choice for portability and those who are more price sensitive.

If screen brightness is important to you, chalk up another point for the MacBook Pro with its 500-1600 nits brightness vs 400 nits on the MacBook Air.

The new MacBook Pro’s up to 1,000 sustained nits brightness (1,600 peak) may be just for HDR content, but you’re still getting up to 120Hz refresh rates with ProMotion, mini-LED backlighting, and even thinner bezels.

The new 14-inch MacBook Pro display does include a notch at the top center of the display for the 1080p FaceTime camera. But unlike the iPhone, the notch doesn’t include Face ID hardware/support on the new MacBook Pro notebooks.

The difference between the 2020 Air and Pro with the rest of the I/O not covered above is the Touch Bar coming on the MacBook Pro and dedicated row of function keys (new ones too for dictation, spotlight, more) on the MacBook Air.

One downside with the 2020 MacBooks is support for just 1 external display up to 6K at 60Hz.

In contrast, the 14-inch MacBook Pro offers much more I/O including 3 USB-C/Thunderbolt ports, HDMI, SDXC slot, MagSafe, and support for up to 3 external displays.

As you’d expect, the MacBook Air is the lightest machine with the 13-inch MacBook Pro weighing a touch more, and the 14-inch naturally being the heaviest.

The MacBook Air is also the thinnest notebook from Apple with its tapered design. And if the gold color is appealing, keep in mind it’s only available with the MacBook Air.

Real-life use shows massive battery life gains for Apple Silicon MacBooks compared to the old Intel models. However, keep in mind you probably won’t see exactly the Apple ratings of up to 15-20 hours without compromises like turning down display brightness, etc.

But in any case, the power efficiency and battery life improvements are big with Apple Silicon!

Across the different configurations, it’s a $300-$1,000 difference between the MacBook Air and MacBook Pro.

Hopefully, you’ve got clarity now on which MacBook is right for you. If you value the most power, active cooling for extended heavy workloads, a brighter screen, and more ports, the MacBook Pro is the way to go.

Meanwhile, if you have light to medium performance needs, and prefer the lightest machine with great battery life, the MacBook Air is the choice starting at a really reasonable $999.