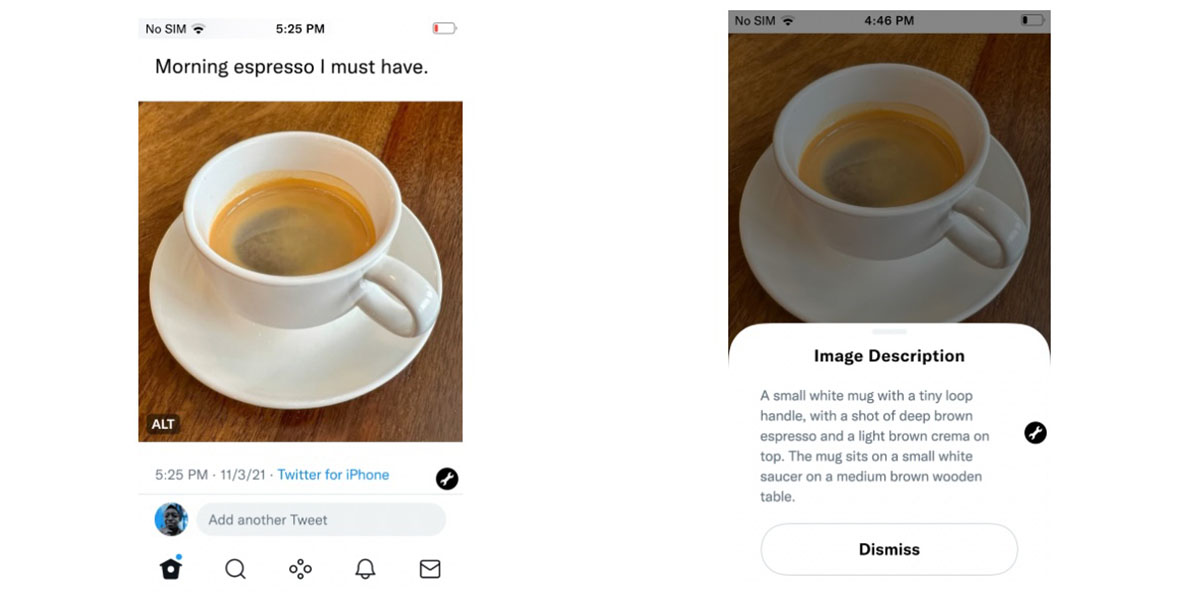 Twitter accessibility improved today for people who are blind or have limited vision. The company is globally rolling out improvements to its image descriptions, after testing them for a month …

Twitter, like the web, allows people to include text descriptions of images. This is known as ALT text, as it provides an alternative to looking at the image. Those using screen-readers to turn text into speech can thus hear image descriptions as well as text.

Twitter uses the example of a photo of a cup of espresso.

A small white mug with a tiny loop handle, with a shot of deep brown espresso and a light brown crema on top. The mug sits on a small white saucer on a medium brown wooden table.

Last month, the company announced that it would be testing improvements to this feature across 3% of Twitter users. One of the most significant of these is an ALT badge on images that have text descriptions. This is designed to be easy to spot for those with vision impairments, and to be read by screen-readers used by those who are blind.

Twitter says that the improvements have now rolled out to all Twitter users, across the web, iOS, and Android.

As promised, the ALT badge and exposed image descriptions go global today. Over the past month, we fixed bugs and gathered feedback from the limited release group. We’re ready. You’re ready. Let’s describe our images!

After you upload an image for your tweet, you’ll now see an Add description link on the web, or a +ALT button in the iOS app.

Clicking or tapping that opens a text box where you can describe the image. Up to 1,000 characters are allowed. Hit Save (web) or Done (iOS app) when you’re finished.

To read the descriptive text, just click or tap the ALT button.

Comments in the thread suggest that Twitter still has work to do, but it’s certainly a very welcome development.