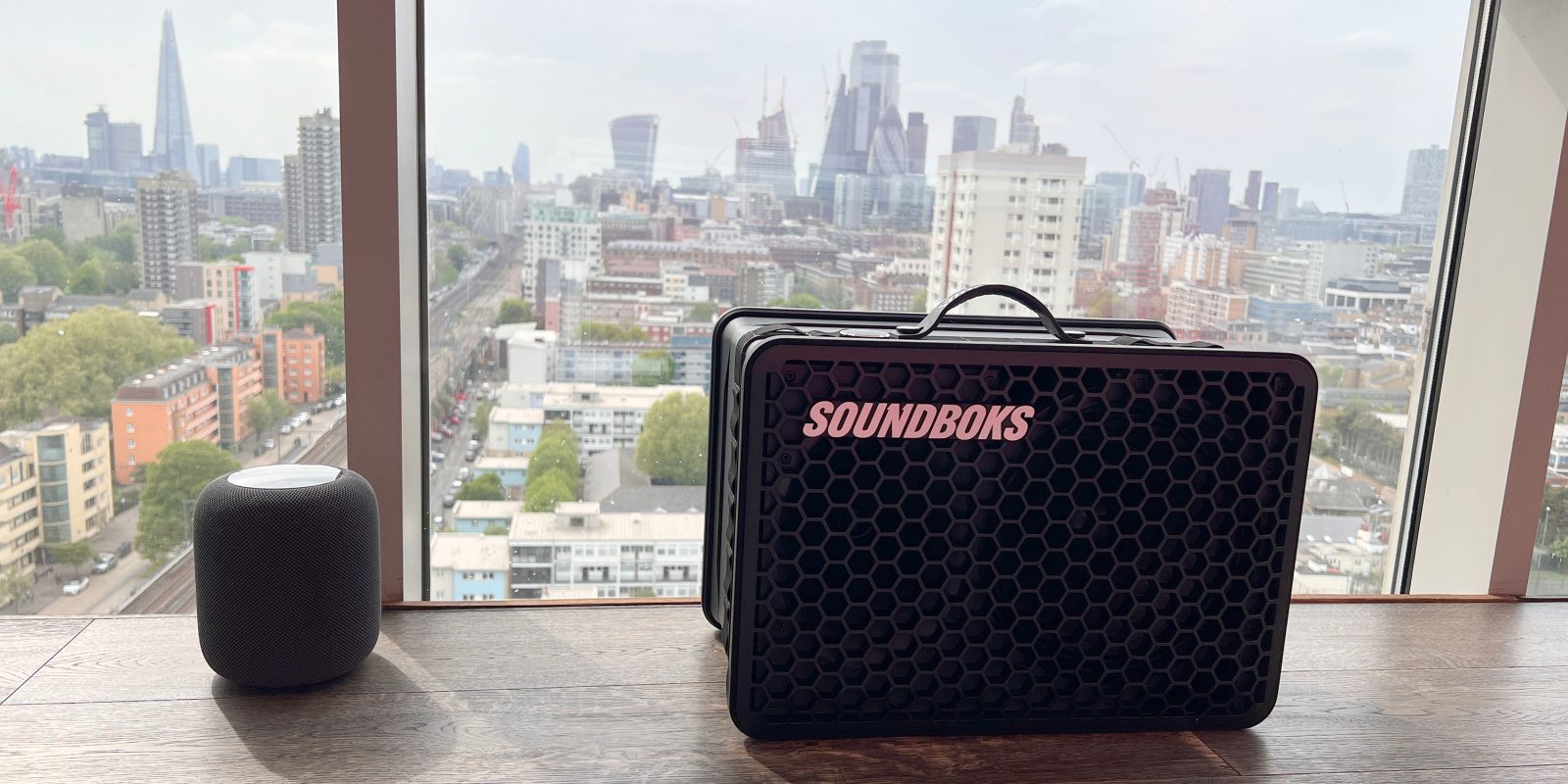 It’s actually a smaller version of the original thousand-dollar Soundboks speaker. This one costs $700, and not only maxes out at 121dB, but you can even pair five of them together (if you don’t need your ears afterwards).

The most obvious immediate impression of the appearance of the Soundbok Go is that it’s black and big – very big! The speaker measures 18 inches wide by 12 inches high by 10 inches deep.

The front has a distinctive hexagonal grille, with a somewhat gaudy silver logo. Subtle, this thing is not.

On the top, there’s a reasonably comfortable rubberized carrying handle, a weighted volume knob with white LED segments, and a couple of buttons used to switch between solo and multi-speaker modes. The volume knob doubles as a power button, pressing and holding it to power on and off.

It’s made of a mix of ABS and polycarbonate, with silicon rubber bumpers designed to protect it when you set it down – something you’ll want to do quickly, as it weighs 20 pounds. That said, it’s actually not as heavy as you’d expect from looking at it. I wouldn’t want to carry it far, but it’s fine carting it from a car to a nearby outdoor location, which is really all you’re likely to do with it.

It looks basic rather than premium, but everything is designed to make it as robust as possible. This is a party/beach speaker, and the company expects it to be thrown around a bit.

Setup couldn’t be easier: hold the volume knob down until it powers on, and it automatically enters Bluetooth pairing mode on first use.

It doesn’t offer AirPlay, but then there’s not much point. Despite the size, this is a portable speaker geared to outdoor party use.

The volume knob is reasonably pleasant to use, having a decent heft to it, but the actual feel is still plasticky. There are white LED segments to show volume level, and there’s a battery-saving feature where it lights up all the relevant segments as you turn it, but then falls back to displaying only the highest one after you release the knob. The only time you get any other display is at max volume, when – in a nod to Spinal Tap – it displays an 11.

The battery is removable, and there’s a pass-through charging adapter which lets you connect to the speaker on one side and the battery on the other. The company warns that the speaker should not be used without a battery connected, as the power supply isn’t beefy enough for full-volume use. That’s not really an issue in practice, and I can’t see many people needing a spare battery for this beast!

When you first play through it at a low volume setting, it sounds surprisingly quiet. This continues all the way up to half volume, where it starts to sound loud, but I’ve heard similar volumes from much smaller speakers.

Above 50%, things get very loud, very fast. It doesn’t feel like a linear progression, more like a logarithmic one. There are two volume increases for each segment LED, and by the time you get to 7/11, it hurts your ears to be standing in front of the speaker operating it. After that, you’ll want to stand behind it, turn up the volume and run …

The default Outdoor sound quality is … well, I think the phrase I would use is ‘tuned to its market.’ The company expects this to be used in a party situation where it’s all about the power of the rock track, not the subtlety of the antiphonally placed strings in the Mozart Violin Sonatas.

The one-inch tweeter struggles to keep pace with that 10-inch woofer, so a chest-thumping bass leaves the treble rather weak. There are no EQ controls on the speaker itself, but the companion app lets you choose between Outdoor, Indoor, and Bass+ modes.

Bass+ mode is even, well, thumpier. I would never use this mode, but I bet lots of owners will: earth-shaking bass without distortion at ‘police attendance imminent’ volume levels at outdoor locations is what this speaker is all about.

Indoor mode is a much better balanced sound, but even so, the bass still dominates – just to a lesser degree.

Finally, there’s a manual EQ mode. This is a nice feature, letting you set your own profile and give it a name for future use.

Even so, it didn’t matter how ridiculous a sound curve I created, it never got anywhere close to a neutral sound.

If this is you, I think you’re going to be very happy with it.

The Soundboks Go costs $699, and is available from the company’s website. Add a rather steep $50 if you want a shoulder-strap.