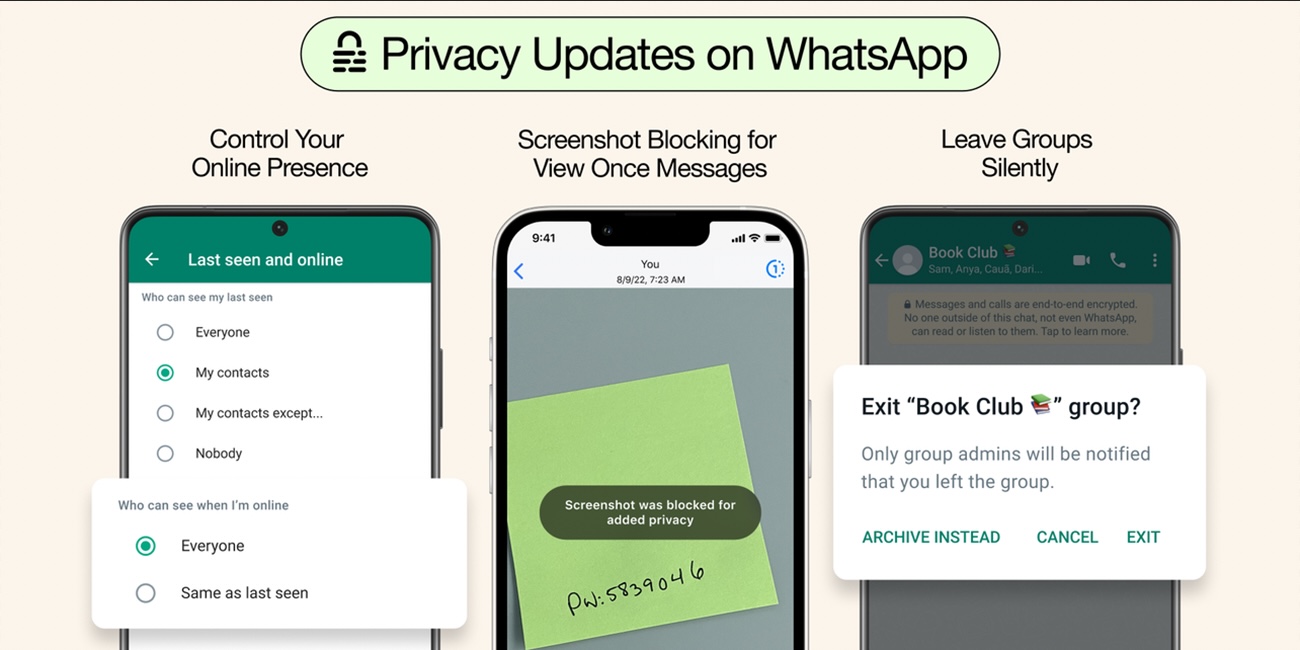 New privacy features coming to WhatsApp: exit group chats without notifying everyone, control who can see when you’re online, and prevent screenshots on view once messages. We’ll keep building new ways to protect your messages and keep them as private and secure as face-to-face conversations.

WABetainfo has more details, including the fact that this is part of a marketing campaign for the security and privacy features of the messaging app.

WhatsApp is now launching a new global campaign starting in India and U.K. (more countries will be following later) in order to inform users about new features and how WhatsApp secures their experience by using different layers of protections thanks to their privacy features: end-to-end encryption, two-step verification, end-to-end encrypted chat backup, and more.

The focus of their campaign is also to educate people to understand what the real security is: it is important to protect users not only when the information is sent but even when it’s stored (for example, by using end-to-end encrypted backups).

The latter may be a dig at Apple. While iMessages are end-to-end encrypted, their contents are included in iCloud backups, which are not. This means that Apple holds a copy of the encryption key.

We’ve previously speculated that this may be a strategic decision by Apple. Doubt was cast on a specific claim that the FBI had pressured Apple, but it’s notable that some two years later, iCloud backups still don’t use end-to-end encryption.

Matt Navara shared a video for the campaign.

Currently, when you leave a group chat, everyone in the chat is notified. This will change, so only group admins will see that you’ve left.

Personally, I see this less as a privacy feature and more as a diplomacy one! There are situations where it can be seen as rude to leave a chat, and this will allow us to do so quietly.

Control who sees when you’re online

WABetainfo has previously shared a screengrab of this, before it was officially announced.

As you can see, this allows you to choose between everyone, no one, and contacts-only – as well as offering the option to hide your status from specific contacts.

WhatsApp last year introduced a “View Once” option when posting photos and videos, which disappear once they have been seen. However, many complained that it was pointless for photos, since anyone viewing it could take a screenshot.

WhatsApp is now introducing a way to block this, in the same way Snapchat does. Anyone attempting a screenshot will instead see a message reading:

Note that the feature to prevent people from taking screenshots and recording video captures is only limited to view once images and videos: in fact, you can still take screenshots of your conversations, even if they contain some disappearing messages, at the moment.

As always, when you send a view once photo or video, WhatsApp will inform you that people may still get them by using a secondary phone or camera, so it is always important to be careful when using this feature: it’s up to you.

Expect to hear more about existing and planned WhatsApp privacy features as the campaign continues.

In another change revealed yesterday, users now get much longer to delete sent messages.