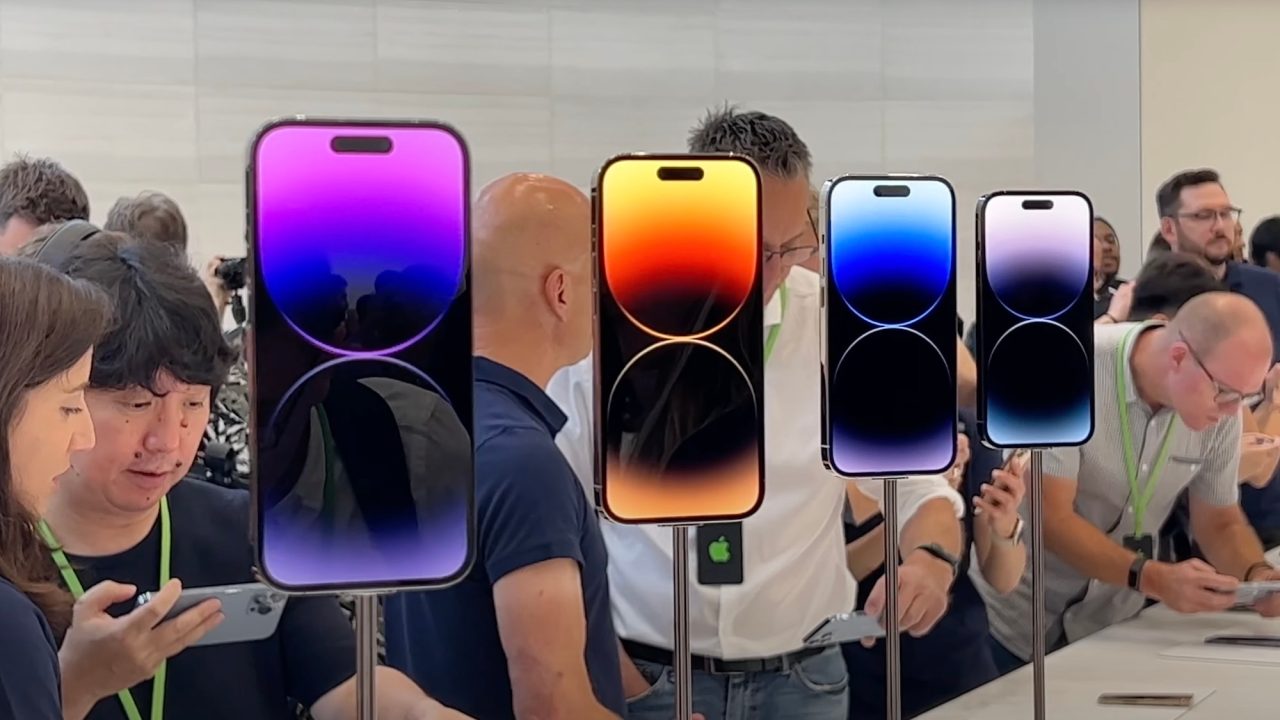 The iPhone 14 Pro and iPhone 14 Pro Max are now official, and they come with a ton of new features. Two of the biggest upgrades are the redesigned notch, which Apple is now referring to as the “Dynamic Island,” and the new always-on display. Head below for a look at the new iPhone 14 Pro in action.

The new iPhone 14 Pro and iPhone 14 Pro Max will be available in four colors, two of which we’ve seen before and two of which are brand new: gold, silver, deep purple, and space black. The first images we’re seeing from the hands-on area at Steve Jobs Theater bring the new colors to life and also show some improvements to silver.

The new space black color is not super dark on the back, but it is noticeably darker than the graphite finish. Where it really stands out is on the stainless steel edges, which are pure black similar to the old space black Apple Watch. The new deep purple design looks really nice with its gloss finish around the stainless steel edges and a more muted purple on the back.

The iPhone 14 Pro’s gold finish looks unchanged from its previous version, but TechCrunch’s Matthew Panzarino says the silver color looks significantly better. In past versions, the white/silver looked muted and murky, but this year it looks to be much closer to bright white.

Here are some pictures of the new white finish as well as how the space black looks compared to the iPhone 13 Pro’s graphite, courtesy of Panzarino.

And here’s a look at the new deep purple color from iJustine and from Krystal Lora.

Outside of the new colors, the other other major changes to the iPhone 14 Pro’s physical appearance are the new Dynamic Island and the Always-On display.

The Dynamic Island is what Apple is calling the replacement for the notch. As rumored, the company is bridging the gap between the two separate display cutouts. The big surprise here is that the area between the gap is completely interactive and, well, dynamic. It contains contextual information based on the app you’re using or live data from other apps.

For instance, the Dynamic Island can show artwork for the music you’re currently playing. It also integrates with the Clock app for things like stopwatches and timers. There’s integration with Apple Maps for navigation information, Live Activities support for real-time notifications, and much more.

Head below for some hands-on footage of the iPhone 14 Pro’s Dyanmic Island and Always-On display. The new iPhone 14 Pro and iPhone 14 Pro Max go up for sale on Friday and will be available on September 16. We’re expecting in-depth reviews from embargoed press sometime early next week.