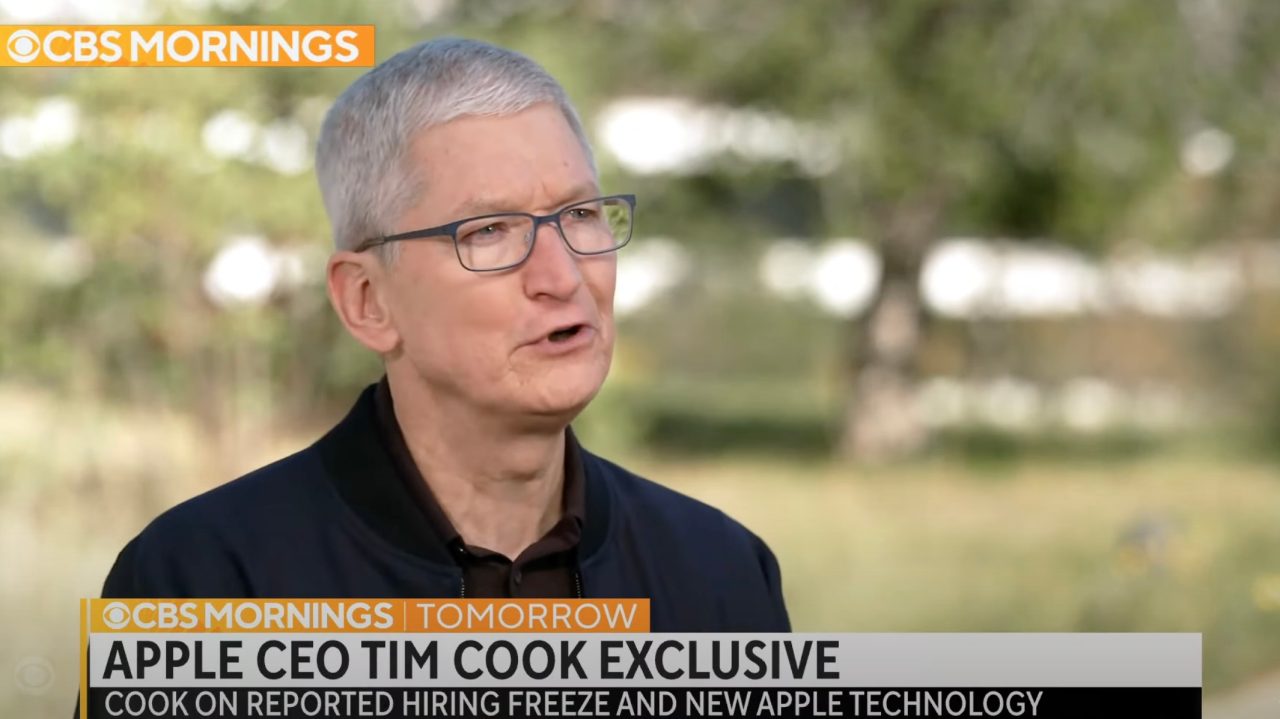 Amid reports of a broad hiring freeze at Apple, Tim Cook joined CBS News for an interview this week to explain the company’s thinking. In the interview, Cook confirms that Apple has slowed down hiring and also addresses its controversial return to in-person requirements.

In July, during Apple’s Q3 quarterly earnings call, Cook said that Apple was “still hiring” but doing so on a “deliberate basis.” Since then, a pair of reports from Bloomberg and Insider said that Apple is more broadly slowing hiring, including freezing hiring on some teams and slashing budgets for 2023.

Speaking to CBS News in an interview that aired (in part) on Monday morning, Cook further explained what Apple is doing. According to the Apple CEO, Apple is “continuing to hire,” but “not everywhere in the company.”

“What we’re doing as a consequence of being in this period is we’re being very deliberate on our hiring. That means we’re continuing to hire, but not everywhere in the company are we hiring.

We believe strongly in investing for the long-term. And we don’t believe you can save your way to prosperity. We think you invest your way to it.”

As for Apple’s return to in-person work, Cook explained that he believes in-person collaboration is key to innovation and teamwork. But with that being said, he noted that Apple employees aren’t in the office five days a week – and on Fridays in particular, the offices are “a ghost town.”

“We make product, and you have to hold product. You collaborate with one another because we believe that one plus one equals three. So that takes the serendipity of running into people, and bouncing ideas off, and caring enough to advance your idea through somebody else because you know that’ll make it a bigger idea.

That doesn’t mean we’re going to be here in five days [a week]. We’re not. If you were here on a Friday, it would be a ghost town”

The full CBS News interview with Apple CEO Tim Cook is set to air tomorrow, with CBS teasing a discussion on “new technology” and more.

Other tech companies such as Snap, Lyft, Salesforce, Shopify, Coinbase, Amazon, and Stripe have also made the decision to lay off employees in recent weeks.

For Apple, the strategy of investing through the downturn has been successful in the past. The iPhone was released in 2007, and the company continued to innovate and make hires through the 2008 recession in the United States. With its stockpile of cash even larger now, we expect it to continue this strategy through however long this downturn lasts.