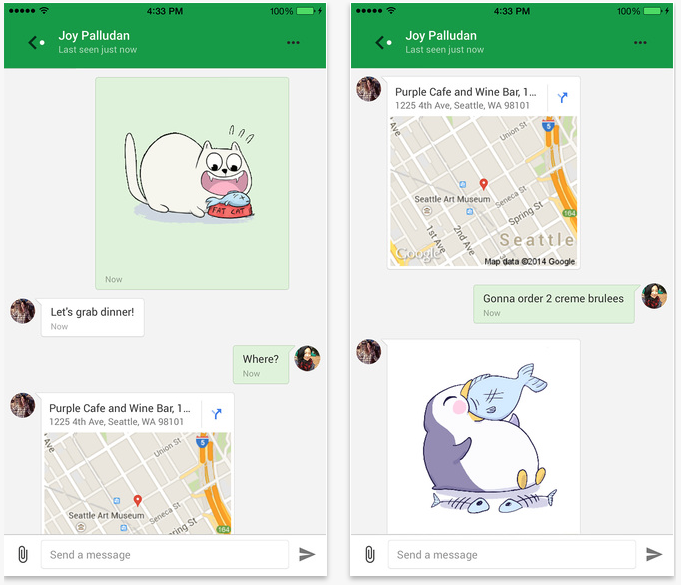 Google promised that it would be building more intelligence into the app, and the new location-sharing feature is the first step along that path. The app automatically detects when a contact in a text chat asks where you are, and allows you to share your location with a single tap …  END_OF_DOCUMENT_TOKEN_TO_BE_REPLACED

Temple Run: Oz: Developers of the Temple Run franchise have once again teamed up with Disney to release a game built on the Temple Run 2 engine but set in the world of an upcoming Disney film. This time Imangi Studios brings the Temple Run gameplay experience to the world of Oz in support of the upcoming Oz the Great and Powerful film. The game is available for 99 cents now and features new gameplay elements you haven’t seen in past Temple Run titles.

NEW FEATURES • Stunning environments inspired by the film – explore them all. • Fly in a hot air balloon – earn even more coins. • Explore different locations in Oz – follow sign posts! • The environment changes as you run – test your reflexes. • Compete in weekly challenges – beat your friends! Google Maps version 1.1: Google Maps for iOS gets the ability to search Google Contacts, quickly access search for local places, and select between Kilometers or Miles. Google announced the new features in a blog post and also noted that it is rolling out the English version of the app to seven new countries including: Bahrain, Egypt, Lebanon, Oman, Qatar, Saudi Arabia, and UAE.

Your Google Contacts are now integrated into Google Maps for iPhone – meaning that when you’re signed-in and search for a friend’s name, their address will appear as a suggestion (if you have their address saved). Simply tap their name to see the address, which will visible only to you, on the map. To learn an easy way to keep your Google Contacts synced with your iPhone, click here.

* Search your Google Contacts; sign in to have your saved addresses show up when you search for friends and family by name. * Quickly search for local places by selecting popular categories such as restaurants, bars, cafes, gas stations, etc. * Choose between Kilometers or Miles for your preferred distance units. * Note that some features may not be available in all countries.