Following Apple’s big push into education with the announcement of the new “iBooks 2.0” and “iBooks Author” platform, new reports claim 27 German textbook publishers are banding together to combat Apple with a digital textbook platform of their own. The platform will launch in time for the 2012 to 2013 school year.

According to a report from German language publication Boersenblatt.net (via eBookNewser), the unspecified German textbook publishers will unveil the new platform in Hannover during the Didacta Education Trade Fair from Feb. 14 to Feb. 18. The report seems to claim the platform is backed and developed in conjunction with the Educational Media Association. There is not a ton of details, but the reports claimed the platform would be completely open and available to all vendors and publishers, along with being supported on all devices and operating systems. According to eBookNewser: “There’s going to be both online and offline modes, and teachers and students will be able to purchase eBooks from different publishers and manage them on a shelf.” END_OF_DOCUMENT_TOKEN_TO_BE_REPLACED 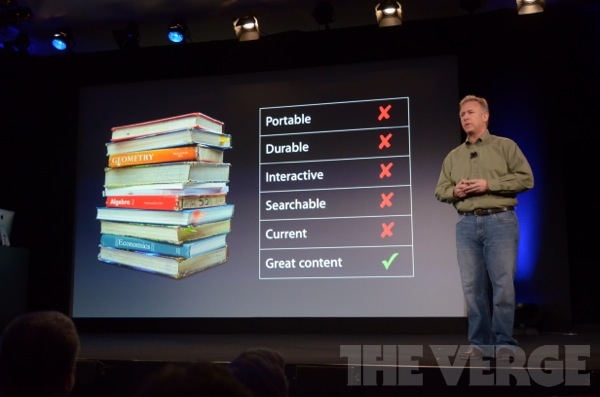 image via the Verge

NOTE: The full coverage is right after the break.

McGraw Hill CEO Terry ..wait for it.. McGraw is in attendance.

10:00am: Schiller time! “We’re proud to help students learn”…and “Students are being introducd to the iPad”

10:09: How do textbooks measure up? Content amazing but portability and durability are bad.

END_OF_DOCUMENT_TOKEN_TO_BE_REPLACED