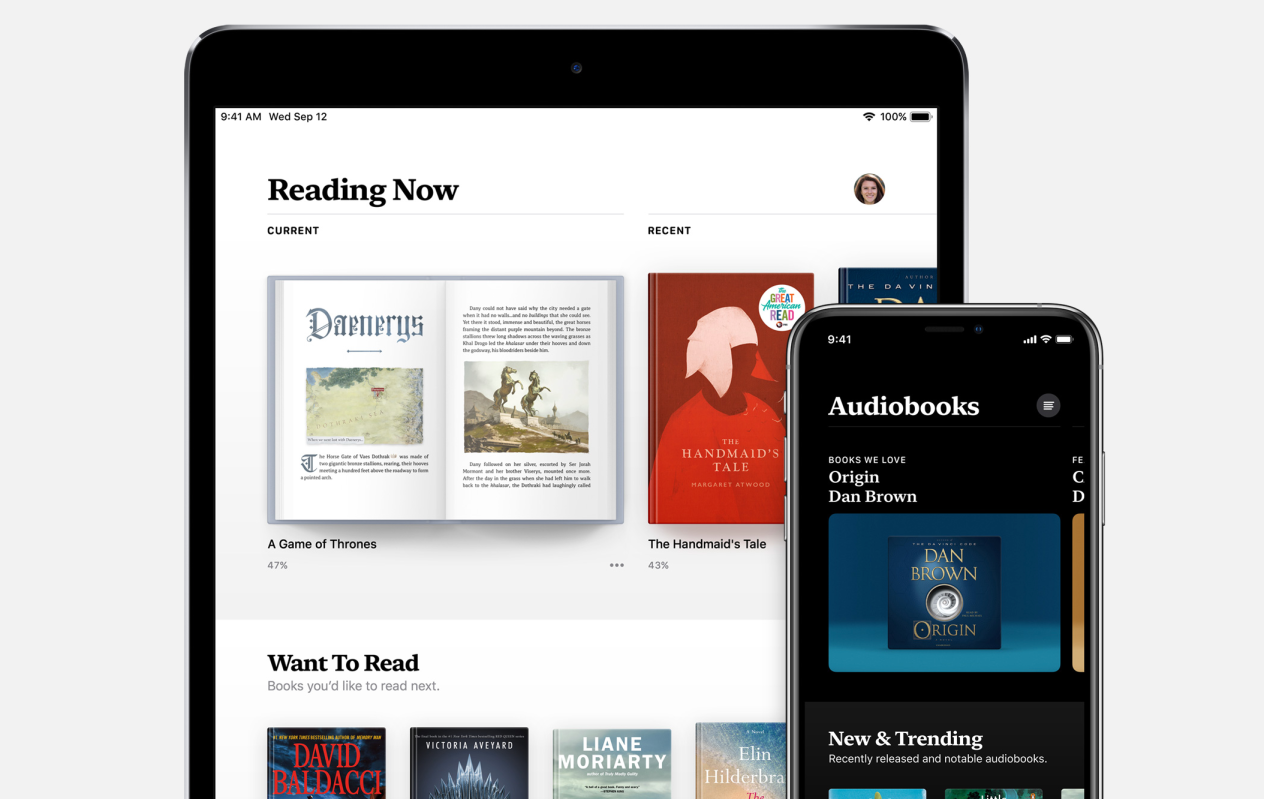 Apple Books is an all-in-one ebook reader, bookstore, and audiobook player. It primarily uses ePub (with DRM) as the format, but users can also add their own PDF files and sync them over iCloud.

The primary competition for the Apple Books is the Kindle app and the Kindle store. The Kindle ecosystem also has the advantage if having a dedicated e-book reading devices as well.

The bookstore was the subject of an antitrust trial in 2013. The long-standing pricing model for both paper and electronic books was the so-called wholesale model. Publishers sold in bulk to the retailers, and the retailers decided how much to charge. Because retailers were competing with each other, that kept prices down, with Amazon leading the away on ebook pricing with $9.99 bestseller deals.

What Apple – and specifically Steve Jobs – pushed for was a switch to what’s known as an agency pricing model, where publishers decided the price of their books, and retailers took a percentage cut. This maximized profits for publishers and retailers alike, but reduced price competition as the same book would cost the same wherever you bought it. Key to the success of the initiative was to persuade major publishers to tell Amazon that it would likewise need to switch to the agency model if if wished to continue buying from them, and for those publishers not to sell to anyone else at a lower price. It’s alleged that Jobs wrote to five major publishers – HarperCollins, Penguin, Simon & Schuster, and Macmillan – and invited them to switch to the new model.

The U.S. Justice department closed the case against Apple Books in 2015. The ironic thing is that Amazon’s marketshare for ebooks is around 83% in the US, so they are the dominant company by far.

Spotify audiobooks launch with 300k titles, but no discounts for subscribers

Spotify audiobooks are now on sale, following the company’s announcement that it was further diversifying its business model by acquiring the audiobook platform Findaway. It follows a previous diversification into podcasting.

If this sounds like old news, that’s because Spotify previously dipped its toe into the waters by offering just a handful of public domain titles, but has now 300,000 paid titles available …

END_OF_DOCUMENT_TOKEN_TO_BE_REPLACED 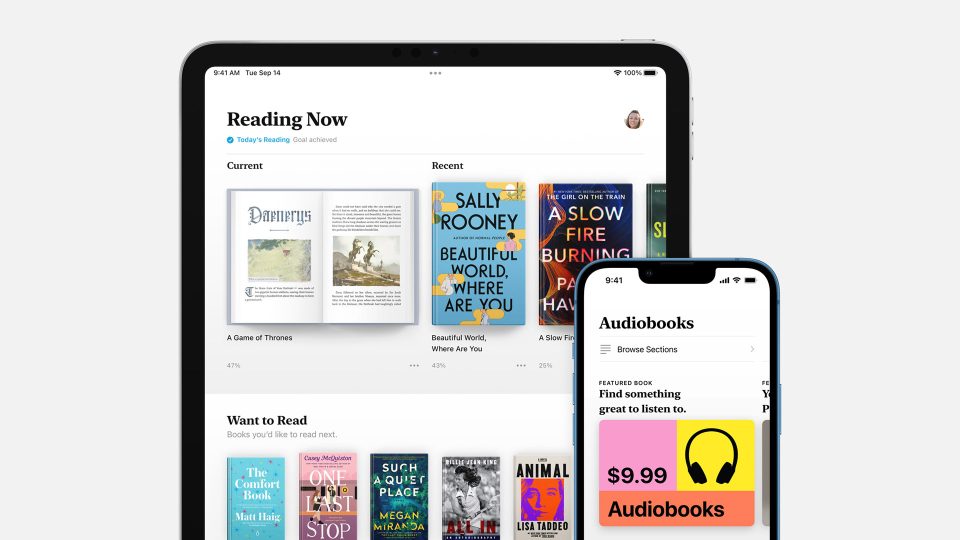 Apple on Tuesday sent a reminder to sellers of books with content available in the Apple Books Store about new tax regulations in the Canadian province British Columbia. Remittances for book sales in Canada were reduced by a 7% provincial sales tax (PST) on Apple’s commission for publishers based there.

END_OF_DOCUMENT_TOKEN_TO_BE_REPLACED

Apple Books app not working for many users after iOS 15.5 update 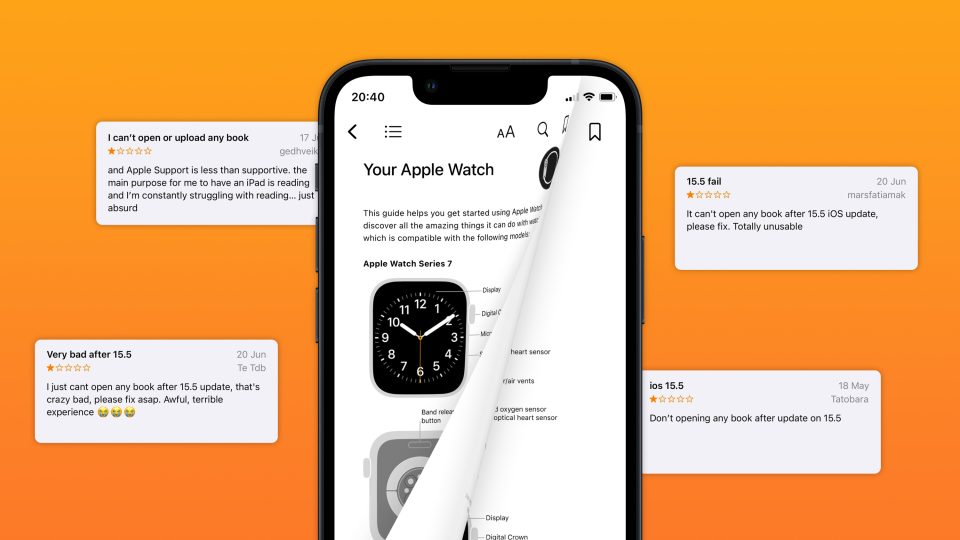 Apple released iOS 15.5 in May with enhancements to the Podcasts app, Apple Cash, and overall bug fixes. However, it seems that the update also caused some issues for Apple Books users as the app stopped working for some people after the iOS 15.5 update.

END_OF_DOCUMENT_TOKEN_TO_BE_REPLACED

The case for Apple Books vs Kindle – which is best for you?

I have been using Kindle for most of my e-book needs for the last decade. The last few years, I have been reading on a Fire Tablet as it offers additional capabilities than a Paperwhite for a more affordable price tag. Since becoming an Apple user in that time, it’s hard to get over the all-in-one seamless user experience of Apple Books. Now that Apple’s Friday Night Baseball is bringing content to Apple Books, is it a good idea to switch from Kindle?

END_OF_DOCUMENT_TOKEN_TO_BE_REPLACED

Releasing today on Apple Books is a tell-all from inside the offices of Lumon Industries. As the company behind Apple TV+ drama, “Severance,” the book dives into the controversial procedure seen in the show. One month after the series premiere, the book is from the perspective of a Lumon employee who risks everything to expose the truth.

Apple this week announced its own book club through the Apple Books app. However, instead of having an entire curation team behind it, all of Apple’s book club content is curated by Canadian media personality George “Strombo” Stroumboulopoulos.

END_OF_DOCUMENT_TOKEN_TO_BE_REPLACED

Apple and Oprah are expanding their partnership with a new Siri feature for book recommendations while also promoting Oprah’s Book Club on Apple TV+.

Apple reveals most popular books, podcasts of the year including first-ever show of the year 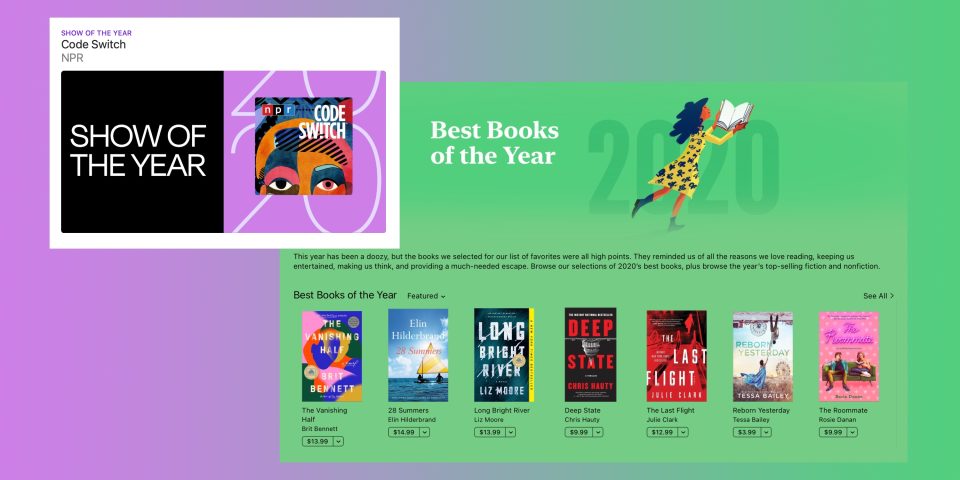 2020 is (thankfully) coming to a close and Apple has shared some handy collections for what it considers the best content from this year. The lists include the most popular podcasts, books, audiobooks, and more like “Biggest Shows of 2020.” And in a first, Apple Podcasts has named a “Show of the Year” with the honor going to NPR’s Code Sw!tch.

END_OF_DOCUMENT_TOKEN_TO_BE_REPLACED 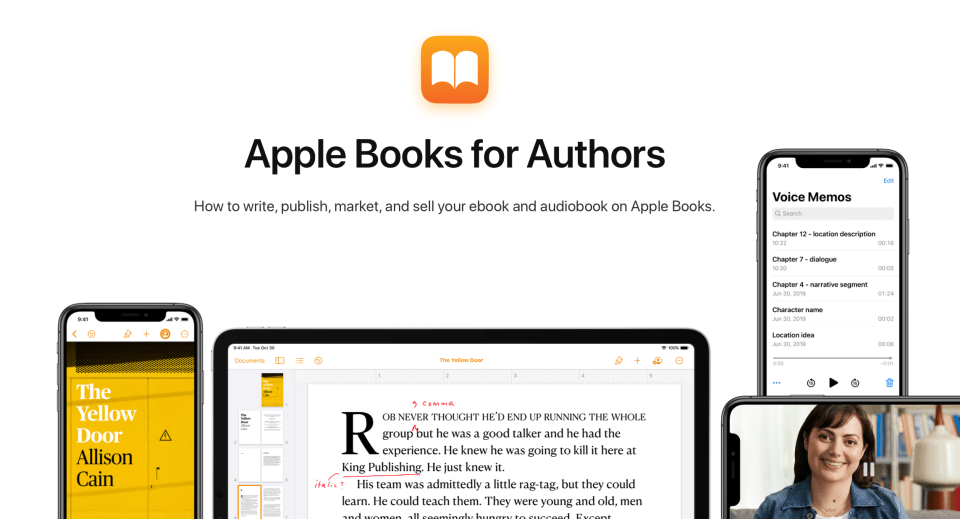 Apple has released a neat new rich resource today to help writers publish their content on its Apple Books platform. The new website walks through writing, publishing, marketing, and looking at analytics with Apple Books and since it’s web-based works with both Mac and Windows.

END_OF_DOCUMENT_TOKEN_TO_BE_REPLACED 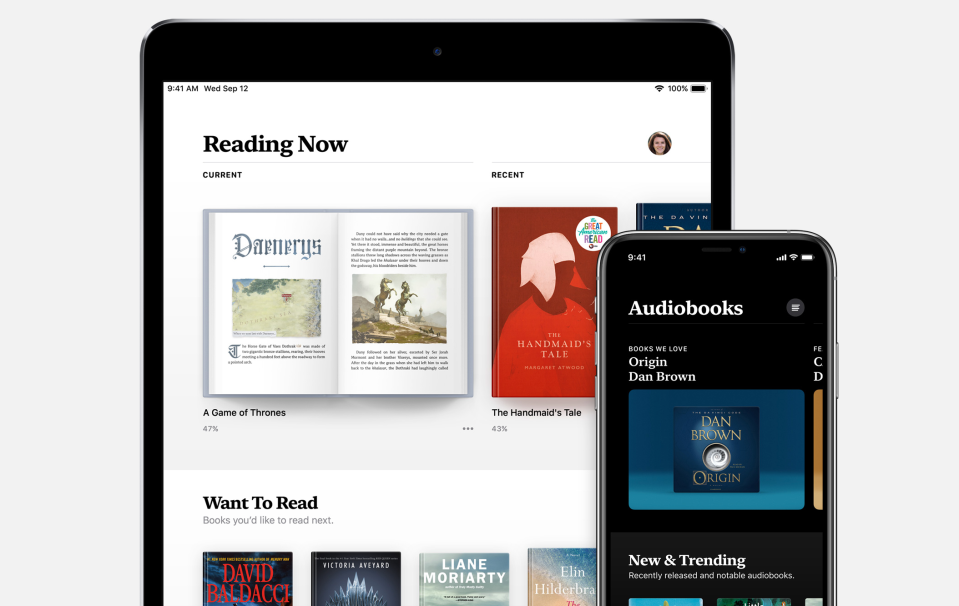 Earlier today, the Apple Books app sent out a push notification offering a free Apple Book to users. The notification mentioned read-alongs for kids, cozy mysteries, and audiobooks for the whole family.

END_OF_DOCUMENT_TOKEN_TO_BE_REPLACED

Comment: My favorite books of the decade on Apple Books

On Sunday, I published a list of my favorite podcasts of the decade. Podcasts are a huge part of my entertainment “diet,” but another one that has become just as big is reading. In 2019, I read 69 books. In a noisy world, reading has become my go-to activity to quiet my brain. For my last post of the decade, I wanted to give you my favorite books of the year. Whether you read on Apple Books, Kindle, Audible, or even paperback, I think you’ll enjoy these books. END_OF_DOCUMENT_TOKEN_TO_BE_REPLACED

Comment: It’s time for Amazon, Apple, and others to create a Books Anywhere service

A few weeks ago, I mentioned how, between all of the excellent podcasts, music, movies, TV shows, and books that the thing most creators are fighting for more than ever before is people’s attention. No longer are we limited by the songs in our library. Apple Music or Spotify gives us access to almost every song available. 99.99% of podcasts are free, so there is always something new to binge. Netflix, Amazon, YouTube, Hulu, Apple TV+, and countless others provide us with more TV shows and movies than we could ever hope to watch. The industry, in my opinion, with the most opportunity going forward, is the digital book market. END_OF_DOCUMENT_TOKEN_TO_BE_REPLACED

Out of all the electronic devices I own, the one I’d want to give up last is my Kindle Oasis. In my opinion, it brings the best of technology while ignoring the worst. I even wrote a few months back about the idea around Apple creating an e-ink reader to take on the Kindle. Despite Apple’s attempts with the Apple Books redesign, the Kindle and Audible ecosystem is still the best place to be for book fans. I was recently made aware of a feature of the Kindle that Apple hasn’t matched but should be on their radar for a future Apple Books upgrade: US public library system integration. END_OF_DOCUMENT_TOKEN_TO_BE_REPLACED 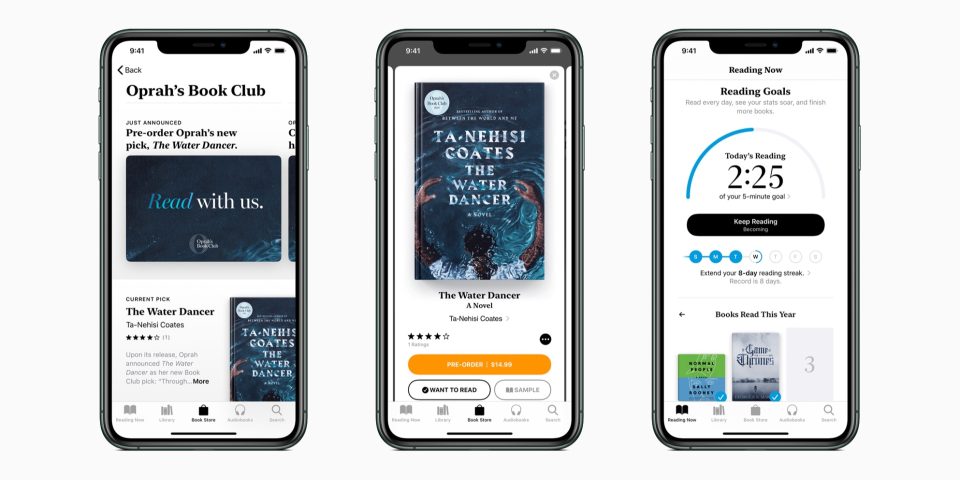 The exclusive TV series will feature interviews with authors of the featured books, with new episodes released every two months.

END_OF_DOCUMENT_TOKEN_TO_BE_REPLACED

A Catcher in the Rye ebook, along with electronic versions of three other JD Salinger books, will be available for the very first time after the author’s son changed his stance on electronic publishing.

Should Apple make a Books e-ink reader to take on Amazon’s Kindle? 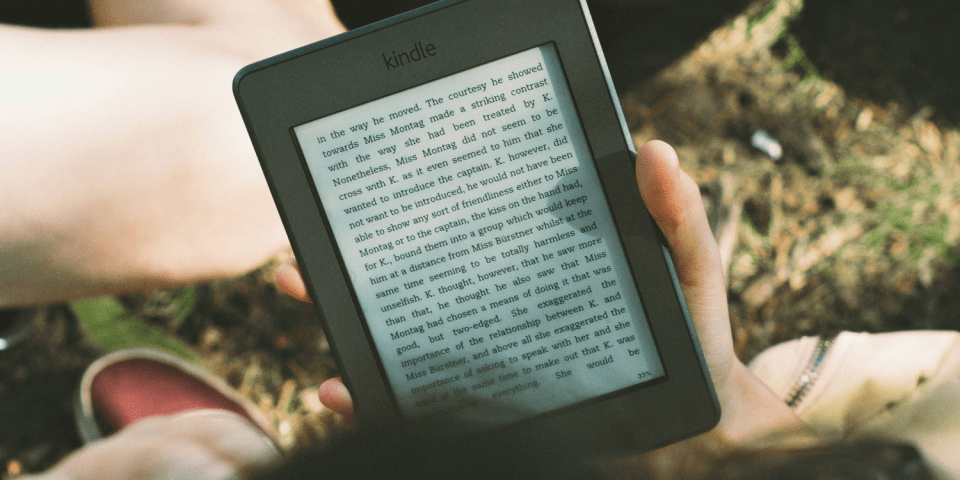 I’ve been a big fan of the Amazon ecosystem for ebooks and audiobooks for a number of years. I’ve had an Audible subscription off and on since 2008, and I’ve been using some version of a Kindle Paperwhite for the past few years. I actually just pre-ordered the new Kindle Oasis. I’ll be doing a review of it on 9to5Toys in early August. Despite Apple’s attempts with the Apple Books redesign, the Kindle and Audible ecosystem is still the best place to be for book lovers. I’d love to see Apple compete against Amazon with an Apple Book reader.

END_OF_DOCUMENT_TOKEN_TO_BE_REPLACED

Opinion: Apple’s audiobooks experience could benefit from a subscription overhaul 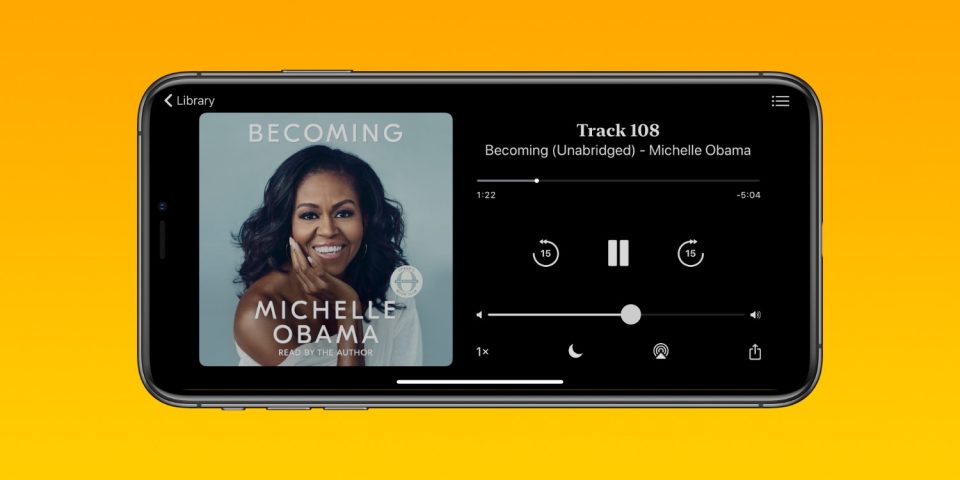 Between iCloud storage and Apple Music to the App Store and iTunes, there’s certainly no shortage of ways to give Apple your money for digital goods. New subscription services are rumored to debut this year, too, including Apple’s first original video content service and a separate service that integrates digital magazines in Apple’s News app based on Apple’s Texture acquisition. There’s even a rumored App Store game subscription service. The lesson here may be that if there’s a digital good you can pay Apple for once, there’s likely an opportunity for a subscription service for that category with recurring payments.

Digital books would qualify, and Apple would hardly be the first to rent ebooks for a monthly fee. My colleague Ben Lovejoy wrote last year that Apple’s Texture acquisition highlighted the opening for an Apple ebook subscription service modeled after Kindle Unlimited. We’ve since seen iBooks become Apple Books with a redesigned app user interface, but no ‘Netflix for books’ yet. Personally, I would love to pay Apple to stream audiobooks — and the service could have features that audiobooks in Apple Books doesn’t offer today.

END_OF_DOCUMENT_TOKEN_TO_BE_REPLACED

While Apple brought a system-wide Dark Mode with macOS Mojave, we’re waiting for iOS 13 to bring that to iPhone and iPad. However, there are some apps that offer a dark mode now, follow along for how to use dark mode with Apple Books on iPhone and iPad.

Apple Books has published six exclusive audiobooks this week, showcasing six great first listen titles read by celebrity narrators. The books themselves are all public domain works from Pride and Prejudice to Winnie the Pooh, recorded by Apple and released in the Book Store for free. 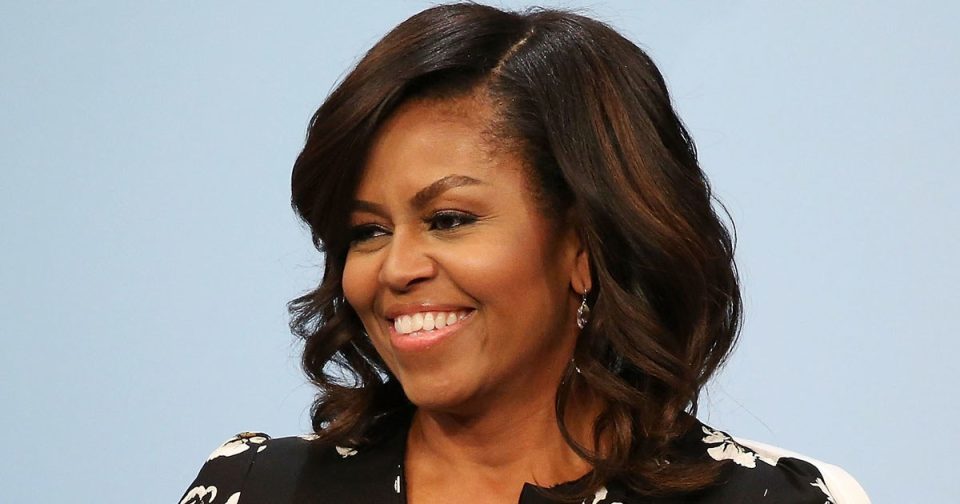 END_OF_DOCUMENT_TOKEN_TO_BE_REPLACED

Apple is updating its affiliate program today for the rebranded Apple Books. And with that, Apple is making some changes for authors and publishers that will make it easier to distribute on the platform.

END_OF_DOCUMENT_TOKEN_TO_BE_REPLACED

Feature Request: After buying a ‘Netflix for magazines,’ it’s time for Apple to do the same for ebooks 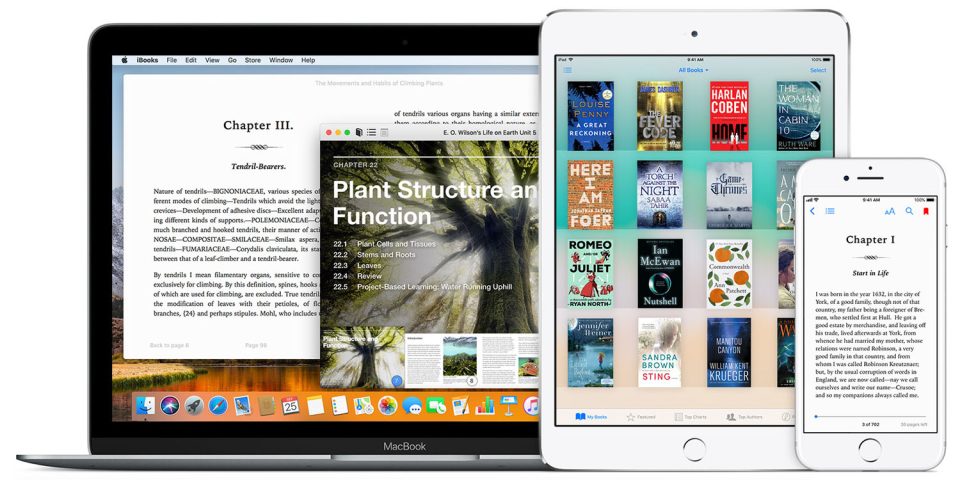 As Apple seeks to boost its recurring income from services, it recently purchased Texture – one of a number of services described as ‘Netflix for magazines.’ Ten dollars a month gives subscribers access to more than 200 different magazines.

That’s nice, but what I really like to see from Apple is ‘Netflix for books’ – perhaps more accurately described as ‘Kindle Unlimited for iBooks.’

If Apple were able to bring to that the kind of discovery smarts it has achieved with Apple Music, it would be a killer product …