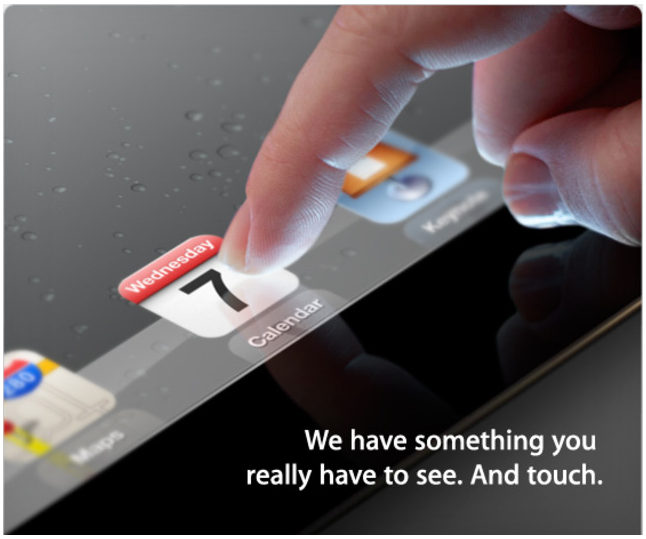 The Verge just reported (and The Loop concurred) that Apple sent invites for that iPad 3 introduction you have waited for, likely with tingling anticipation. The presser is March 7 at the Yerba Buena Center for the Arts in San Francisco at 10 a.m. PST. The three app icons featured on the shot hold subtle clues: The Maps icon shows an infinite loop (it is the “who,” as Apple’s address is 1 Infinite Loop); the Calendar displays Wednesday, March 7 (the “when”); and, the “what” is conveyed through the self-explanatory Keynote app icon.

This news officially exposed CNBC’s report calling for a March unveiling in New York City as grossly inaccurate. True to Apple’s form, the invite teases with an iPad close-up shot featuring a finger touching upon the Calendar icon. The tagline reads:

We have something you really have to see. And touch.

Both the wording (“something you really have to see”) and the image (can you discern the individual pixels on iPad’s display?) would appear to confirm the long-standing rumors of an ultra high-resolution Retina Display (2048-by-1536 pixels), reportedly the key selling point of the device. Also interesting is lack of the physical home button—assuming the close-up was meant to depict iPad 3 in portrait orientation. Some fans also took to Twitter to note how Apple unmistakably sent out invites just as Eric Schmidt was delivering his Google keynote talk at Mobile World Congress in Barcelona, Spain.

Our sources expect at least three next-generation iPads possibly running a dual-core A5X chip sporting an improved graphics engine. Per Apple’s naming convention, the A5X seems to be an alleged evolution of iPad 2′s A5 processor and not a major upgrade the rumored quad-core A6 chip is expected to be. Today’s announcement also reinforces claims of near-immediate availability based on sightings of iPad shipments landing at ports of multiple countries around the world.

9to5Mac will provide live coverage of the announcements as they happen.