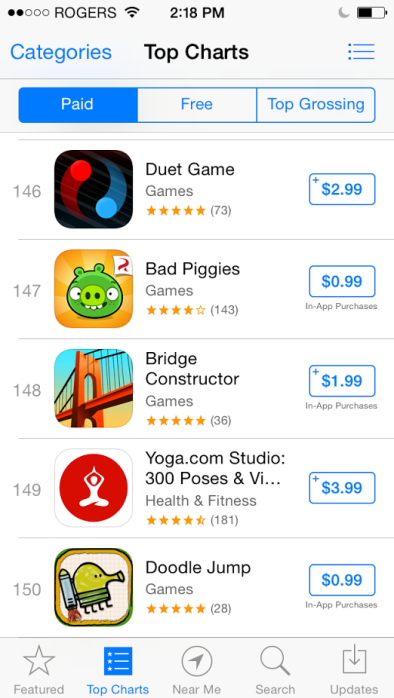 that Apple has quietly made some changes to the App Store Top Charts by reducing the top 300 apps previously listed across Paid, Free and Top Grossing categories to just 150. It’s what I expect will be a welcomed change that shows Apple is attempting to clean up the App Store ranking system, but it’s not one that most users are likely to notice. As noted by app tracking company Appsfire in the report, “most users don’t even get to that part of the ranking – except industry watchers. If there’s any good reason to remove this part, it’s because it’s not used.”

It is, however, still up for debate if this will have any impact on the mostly smaller developers that will get booted from the top charts as a result. The change so far is only on the App Store on iOS.

It’s a sign at least that Apple is attempting to improve the App Store charts and app discovery in general, something it’s been doing behind the scenes on a regular basis. The change won’t do much to combat the shady tactics used by some developers to game the charts, but hopefully Apple has some bigger changes in store for iOS 8 that we’ll see at WWDC early next month.

In other App Store news, mobile analytics firm App Annie, which is often the best source around for tracking App Store related data that Apple doesn’t provide, announced today that it is acquiring competitor Distimo. With the acquisition, the company is now tracking more than 600,000 apps and has 270,000 registered business users. That includes “90 percent of the top 100 app publishers by revenue.”