Apple offering iPhones on AT&T Next installment plans through online store, but no Verizon or T-Mobile financing (yet)

Following our report in late July that Apple was about to start selling iPhones through carrier upgrade/installment plans like AT&T’s Next, the company is now offering exactly that through its online store.

As of earlier this month, Apple’s website now displays the AT&T Next $0 down installment plan for existing AT&T customers upgrading to a new iPhone 5s, 5c, or 4S. That option is alongside its previous options of purchasing a device under a typical 2-year contract with one of the carriers or unlocked and contract-free.

While Apple is currently only offering the AT&T Next instalment plans through its online store, the company has also started a pilot of T-Mobile’s JUMP and Verizon’s Edge installment/upgrade plans in its retail stores earlier this month, as we originally reported in July. Those plans, however, are curiously not offered online as of yet.

AT&T Next allows customers to upgrade to a new phone every 12 or 18 months with no down payment and bundles the cost of hardware into monthly service plan bills. AT&T also offers approximately $25 off monthly service plans for users signing up through Next as detailed by Apple here. For an entry-level iPhone 5s model, that’s 20 payments of around $32.45 on top of your wireless service costs. Here’s a breakdown of the plan that Apple has on its site: 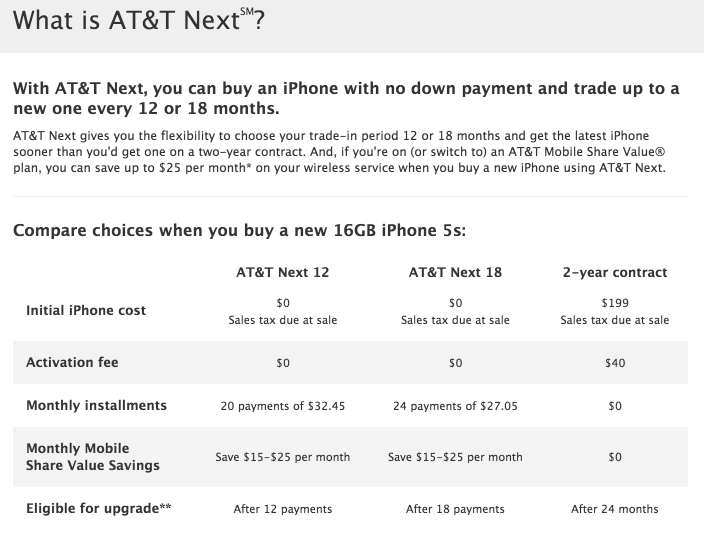 We’ve reached out to Apple for official word regarding the new plans, but have yet to hear back.