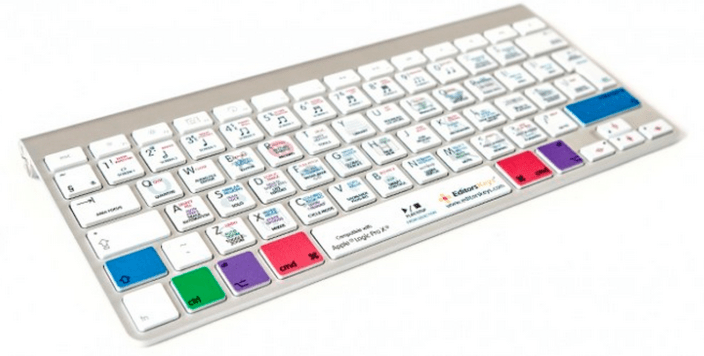 There are a few companies that make skins specifically for Apple’s keyboards to add icons for the various shortcuts that pros use daily in apps like Logic Pro and Final Cut. I’ve tried a few in the past, but the benefits never seemed to outweigh the tradeoff of putting a clunky rubber skin over Apple’s masterfully built keyboard. The latest Logic keyboard I received in for review from EditorsKeys, however, has actually won me over and proven up to the task of permanently replacing my stock Apple keyboard.

The first thing worth pointing out about the new EditorsKeys Logic Pro keyboard is that it’s indeed an authentic Apple wireless keyboard that the company gets from Apple and mods itself. It’s also for the latest version of Logic, Logic Pro X, that Apple introduced last year. There are lots of companies out there that also sell Logic Pro X keyboards with shortcuts permanently overlaid on keys (opposed to a removable rubber overlay or stickers), but it’s not quite as easy to find a quality product that uses an authentic Apple keyboard and shortcuts for the latest version of Logic.

A deal breaker for me with these products is always how the keys feel. As you’d expect, it does change the feel of the keys slightly (not every key has an overlay though), giving them a slight eggshell-type finish compared to the smoother stock Apple keys. It took only a day or two to get used to and I think it’s only something that might bother the most meticulous of users. That’s the good news, because getting over the feel of the product is usually the reason I end up ditching these keyboards before I get to really take advantage of everything the shortcut keys offer. The company’s process is a bit of a secret, but it tells me it’s using a new machine for its latest keyboard that prints a plastic-like ink directly onto the keys.

I’m happy to report that keyboard shortcuts are quite an improvement over previous products I’ve reviewed as well.

Each key packs in two or three commands with everything written out in easy to read text. Lots of the competition just use an icon to represent shortcuts rather than descriptive text for each function and many only include one or two shortcuts per key. EditorsKeys also has light grey icons that sit behind the text on each key and represent its global command (the one that doesn’t require a modifier key).

I also had no complaints with the selection of shortcuts they’ve included (you can’t fit them all), and it doesn’t hurt that the company enlisted the help of around 50 Logic Pro users to design the latest keyboard. All the usual suspects are there for quick access to things like the mixer, hiding plug-ins, and navigating the timeline, but I also found myself learning and incorporating new shortcuts into my workflow that I never bothered to discover in all my years using Logic. One of biggest reasons I wanted to recommend this Logic Pro X keyboard is for users that maybe aren’t as familiar with the long list of keyboard shortcuts in Apple’s audio suite.

While I’m not surprised the company says pros have been loving the new keyboard, it’s perhaps most useful to those new to Logic that want to speed up their workflow and get a crash course in keyboard shortcuts. Having them in front of you while you’re working forces you to learn the shortcuts quickly. After a while you might even feel like you know them well enough to go back to a stock Apple keyboard, but having the visual cues will likely be something you wont wan’t to go without.

The keyboard I got in for review was Apple’s UK layout, but the company also mods the US version of Apple’s wireless keyboard and sells internationally through its website.

Your other options? Messy do-it-yourself stickers that you’ll have to apply yourself (and from my experience are much lower quality than whatever process EditorsKeys uses) or limited options for non-Apple keyboards, which of course isn’t ideal if you’re not ready to part with your Apple wireless keyboard. That’s why I’d be more than happy paying the $100 premium on Apple’s wireless keyboard to have the EditorsKeys, which puts it around the same price as inferior products I’ve tried that also mod authentic Apple keyboards.

The latest Logic Pro X keyboard from EditorsKeys actually provides the best of both worlds: a real Apple keyboard with a shortcuts overlay solution that doesn’t take away from the feel of the original keyboard design. Not only that, but it turns out the company did a pretty damn good job at designing the shortcut overlays compared to the competition. You can get one from the EditorsKeys site here for $179.