BlackBerry compares its new Passport phone to iPhone 6 on stage, challenges you to bend it 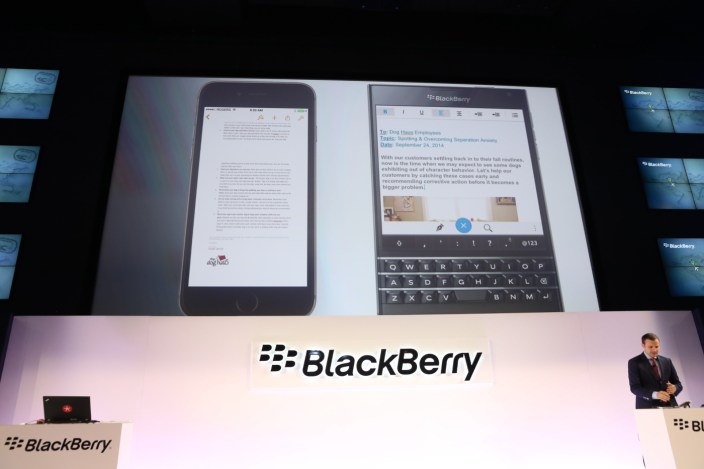 BlackBerry had its big event this morning to officially launch its new BlackBerry Passport smartphone and (surprise, surprise) it’s also joining in on the iPhone bashing usually reserved for the Android and Windows manufacturers.

During the event, BlackBerry CEO John Chen called out Apple on several occasions including even challenging Apple on the most recent Bendgate controversy that has started to pick up mainstream attention. While not mentioning iPhone specifically, Chen noted the bending issues on a new device that have been the subject of controversy among new iPhone owners and challenged the audience to try and bend its new BlackBerry Passport pictured next to the iPhone in the images above and below.

In addition, the company compared the Passport’s extra-wide 4.5-inch display to the experience on an iPhone 6 for tasks like reading mail, which requires additional panning and scrolling on the iPhone (pictured above). The bashing wasn’t limited to the iPhone, however, as BlackBerry also shared comparisons of the Samsung’s flagship Galaxy S5. TechCrunch’s Darrell Etherington noted that the company called out “the iPhone 6 and Galaxy S5 as falling short of the print standard in terms of how many characters per line it can show.” BlackBerry said the Passport display is capable of showing 60 characters per line making for “a near-optimal text line length for consuming written content.”

Lastly, the iPhone 6 got even more stage time during the event for a comparison of Siri to the new BB Assistant feature. BlackBerry called out Siri’s inability to access data on a corporate network such as secure calendar events.