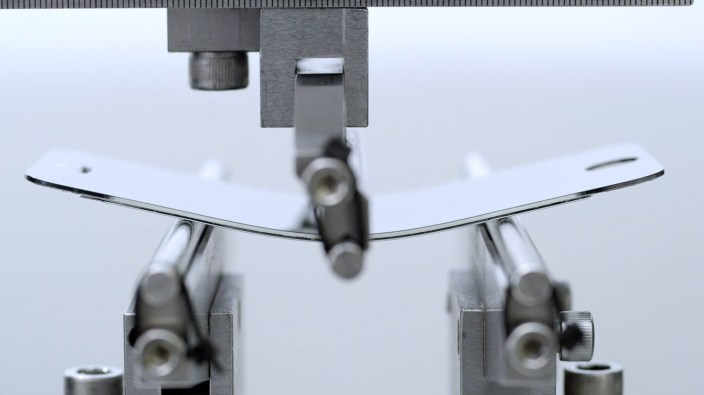 At Apple’s Reliability Testing Lab the iPhone’s Multi‑Touch display is twisted and bowed.

With the iPhone 6 bending controversy heating up and Apple PR masterfully debunking the non-issue earlier today, it should come as no surprise that Apple does a lot of durability testing on its new devices before shipping. However, the team responsible for that testing– Apple’s Product Design Structural Analysis team for iPhone and iPod– needs some help.

Today the company posted a job listing seeking engineers to stress test new iPhones and iPods just as it responded to the controversy saying the problem was “extremely rare” during normal everyday use.

Specifically, Apple is looking for experts in failure analysis, metallography or fractography to work on its Product Design Structural analysis team. The job requires material testing and determining “the strength of raw materials and components” while working with the product design team. In other words, these are the people that are supposed to make sure your iPhone 6 Plus doesn’t bend (during normal use) in your pocket. As for what that durability testing includes, Apple notes the team performs 4-point bend tests, tensile testing, and other industry standard analysis [emphasis ours]. Apple’s tests also include pressure point cycling, sit, torsion, and user studies, according to the company.

Earlier today Apple responded to the bending controversy saying only 9 customers (of the 10+ million new iPhones sold) had complained of bent devices. It also said that “both the iPhone 6 and iPhone 6 Plus passed a series of tests meant to check the products’ strength and durability to withstand every day, real-life use.”