Alpine today announced its first aftermarket in-dash receiver with support for Apple’s CarPlay feature for iPhone users. The new Alpine iLX-007 will be the company’s first display to support CarPlay following Pioneer’s rollout of the feature to its latest NEX displays earlier this month. Alpine’s new in-dash receiver features a 7-inch capacitive touch screen comparable to Pioneer’s high end NEX8000 CarPlay compatible model ($1,400), but at a much lower price point of $800 as it lacks other hardware features.

Alpine’s CarPlay offering is still one of the first on the market yet and joins Pioneer in allowing drivers to have CarPlay without buying a new car. Several automakers have already announced CarPlay availability on certain models of new cars, some of which are already on the road, but will require firmware updates in the future before CarPlay is present.

While Pioneer’s CarPlay-compatible aftermarket receivers received firmware updates to certain existing units already on the market, Alpine’s approach is closer to a dedicated display intended for use with the iPhone and CarPlay with a button on the unit dedicated to Siri.

The Alpine iLX-007 lacks many of the features and hardware found on the Pioneer NEX models like a CD/DVD drive and microSD card slot that customers only looking to add CarPlay to their vehicles may not really want or need. Because CarPlay is centered around the content on your iPhone from apps like Phone, Music, Maps, and Messages, Alpine’s display is streamlined for that experience.

This means the Alpine display has a more minimalistic look and offers the better display quality at a lower price point. Below you can see the Alpine iLX-007 as well as its offered features. 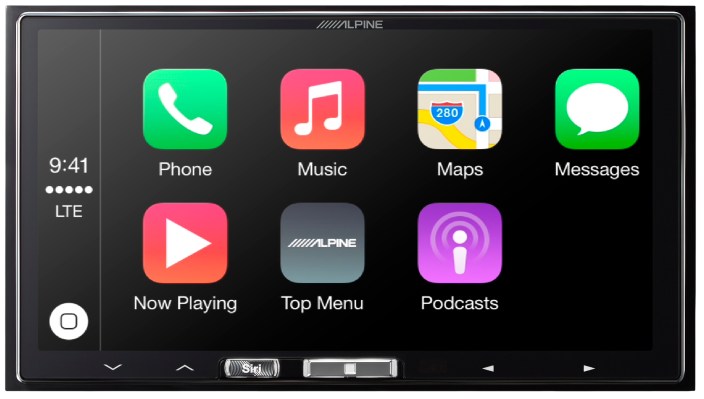 Alpine says its new iLX-007 in-dash receiver is now available through select authorized Alpine retailers with a suggested price of $800.