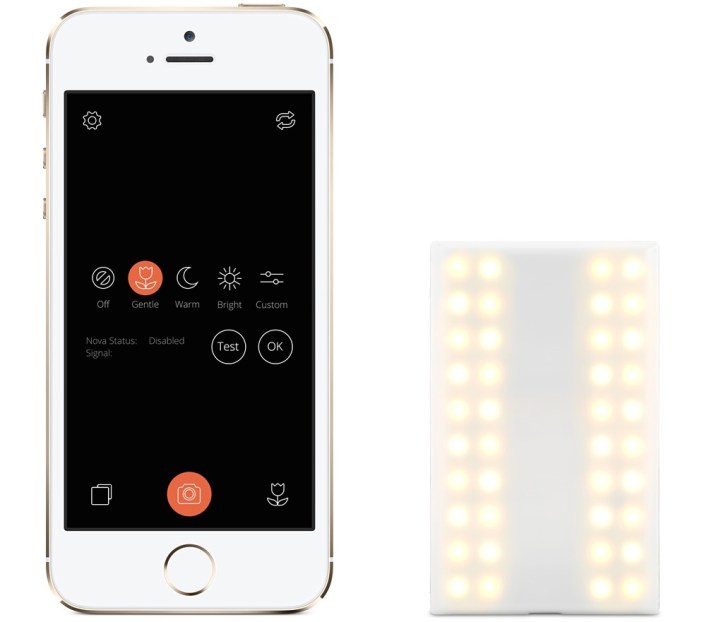 We first told you about Nova, the Bluetooth flash for iPhone, over a year again when the portable wireless flash was crowdfunding on Kickstarter. After being funded in just two days and raising three times its goal in funding from backers, the wireless flash debuted earlier this year as promised.

We reviewed the Nova wireless Bluetooth flash after its launch earlier this year and found its a really clever accessory for iPhone and even iPad users snapping pictures from dark scenes to simple selfies. Now Nova is announcing that it is available through the Apple Online Store for the first time, and will be available at Apple Retail Stores across the United States and Canada later this month.

You can find the Nova Bluetooth flash for iPhone for $59 through the Apple Online Store now in addition to Amazon and Nova’s web store. Details below.

Nova is the first wireless, Bluetooth flash for iPhone users to capture consistently great photos. With a beautiful natural light, Nova captures photos that are rich with color and depth, smoothing out lines and wrinkles, with soft shadows, that makes everyone look their best. It is an off-camera and wireless accessory designed to provide the right light in the right place for amazingly lit photos. Anyone can point and shoot or unleash the artist within using different positions and tilting the light.

The Nova features and details include: