SanDisk is today launching a new Made-for-iPhone/iPad product called iXpand that integrates a Lightning connector into a traditional USB Flash Drive device. Like similar products that have recently started hitting the market, the iXpand makes it easier to transfer content between iOS devices and computers with standard USB ports by including Apple’s proprietary Lightning connector in addition to a traditional USB plug.

Sure most of us can easily transfer content over the cloud these days, but that doesn’t do much good when internet connections or bandwidth limitations keep us from getting our content when we want it. Think video content on a plane, for example. It’s also ideal for those that want a physical backup of files that can be easily viewed on an iPhone or iPad. I recently reviewed a similar product from Sanyo’s Hyper brand, and like that product the iXpand offers a companion app for streaming and viewing files directly from the connected drive to an iOS device:

It launches when the iXpand Flash Drive is plugged into an iPhone or iPad and can be configured to automatically sync photos and videos from the camera roll to the drive. In addition, users can store their favorite movies on the iXpand Flash Drive and instantly play them directly from the drive on their iPhone or iPad. Most popular movie formats3 non-native and PC-friendly ones, like AVI & WMV, are supported — saving time, effort and complexity of converting video formats.

The biggest difference with iXpand compared to other products is the design. The company points out that “iXpand Flash Drive was designed with a unique flexible connector so it can connect directly to iPhone or iPad without first removing the protective case” (pictured below). Other specs include read speeds up to 13MB/sec., write speeds up to 14MB/sec. (over USB 2.0), and a “premium metal exterior” for durability. 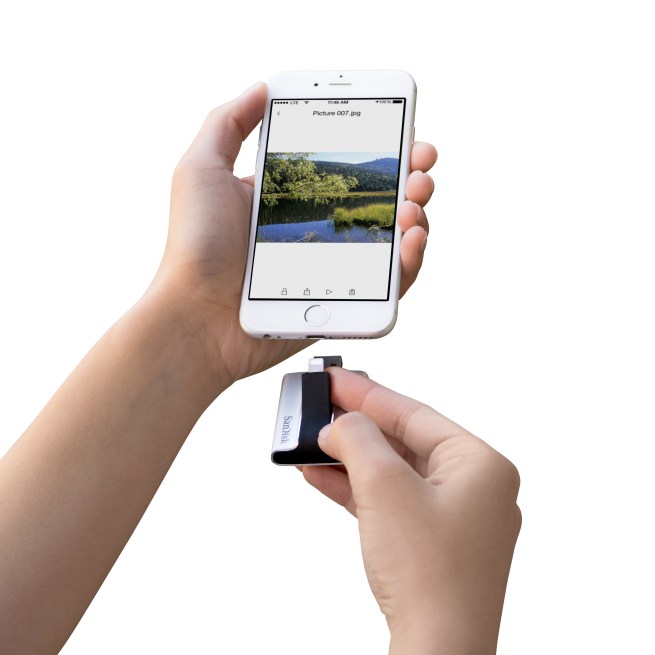 SanDisk will sell 16GB ($60) and 64GB ($120) models through its website and in stores soon, while BestBuy currently has an exclusive on the $79 32GB available starting Nov 16. The SanDisk iXpand Sync companion app is available on the App Store.