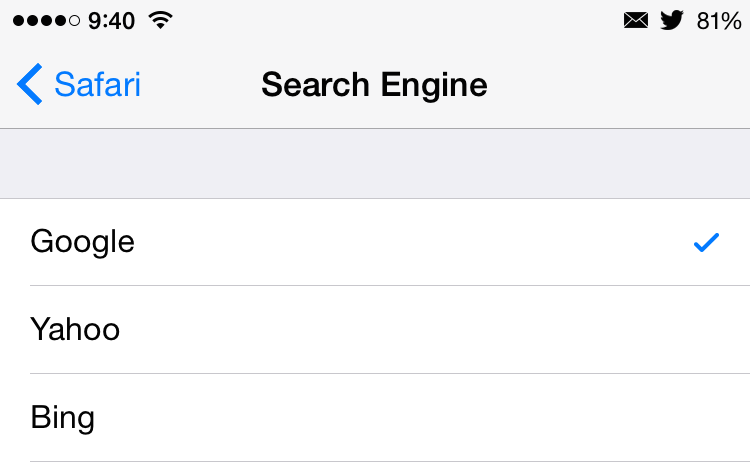 That position has been held by Google since the iPhone’s launch in 2007, but the agreement that made the Mountain View-based company the default site for all of Safari’s searches will expire next year, and The Information reports that Yahoo and Microsoft’s Bing are both vying for the spot.

Both Yahoo and Bing have been included as user-selectable options in Safari for years now, but with Google and Apple constantly at one another’s throats over some smartphone patent or another, the two companies now see the perfect chance to put themselves in one of the most prominent mobile browsers they can.

Apple previously has pulled the plug on Google’s other iOS integrations, such as Maps and the built-in YouTube app in iOS 6, so it makes sense that the company might want to pick a new search provider as well. With Apple holding a sizable chunk of the mobile web traffic market, becoming the default search engine on the company’s devices would be a huge boon for Google’s competitors.

We’ve known for some time that Yahoo CEO Marissa Mayer has been pushing to make her service the default search option on iOS, but Microsoft’s Bing recently gained traction on iOS devices when it became the exclusive search provider for Siri.

While Mayer may have been working on convincing Apple’s executive team for months, the company might want to unify the Safari and Siri search results by setting Bing as the default in the browser. It will certainly be interesting to see who comes out on top in the end.