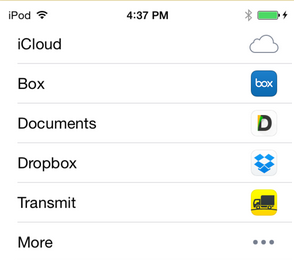 In a blog post today, Mac/iOS developer Panic explained why a recent version of its venerable Transmit FTP/File transfer app no longer uploads to iCloud, and it turns out, other services:

Transmit iOS 1.1.1 is out, fixing a few bugs in our surprisingly powerful file management app for your iPhone or iPad.

Also, at Apple’s request, we had to remove the ability to “Send” files to other services, including iCloud Drive.

In short, we’re told that while Transmit iOS can download content from iCloud Drive, we cannot upload content to iCloud Drive unless the content was created in the app itself. Apple says this use would violate 2.23 — “Apps must follow the iOS Data Storage Guidelines or they will be rejected” — but oddly that page says nothing about iCloud Drive or appropriate uses for iCloud Drive.

If the issue is just iCloud Drive, why did we remove the other destinations? We had no choice. iCloud Drive exists in this sheet.

The developers are taking their case public a few days after the app update was released in an effort to persuade Apple to change their minds in this case.  Seems like a no-brainer. What say you Apple?