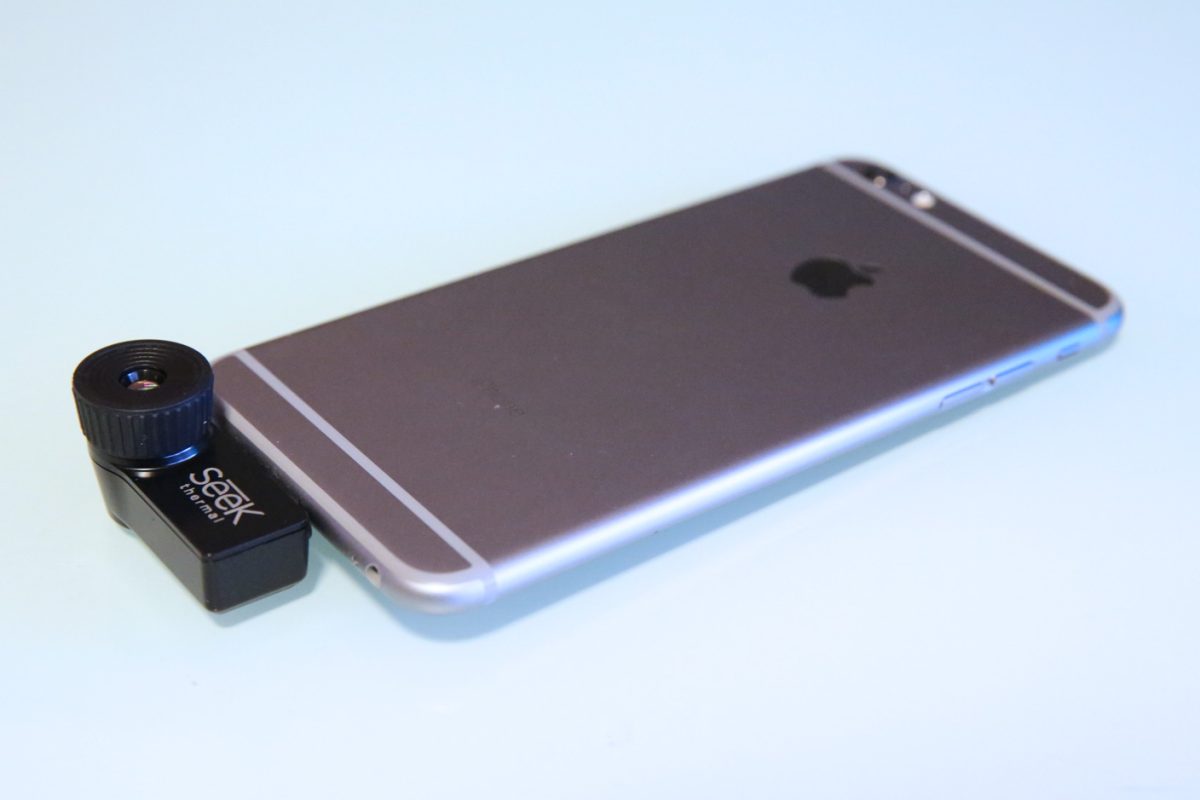 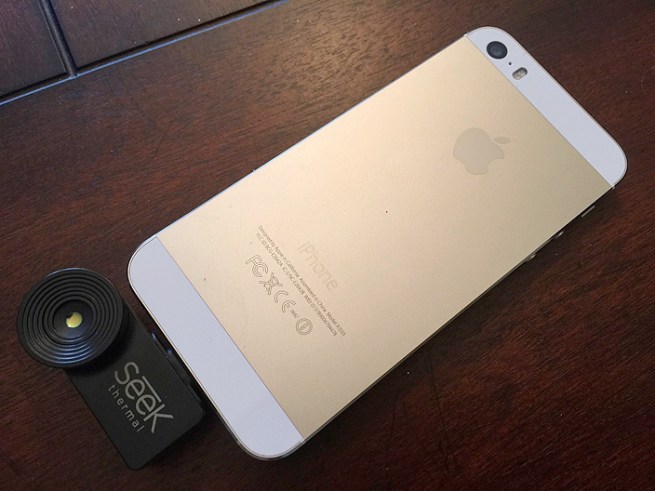 Update 3/3/15: We’ve added the new Seek Thermal XR to the bottom of this review.

The evolution of Apple’s iOS cameras has been fairly linear: Apple improved their image quality, added video recording capabilities, and dropped in a small collection of filters, but otherwise hasn’t radically changed their features.

Just in time for the holidays, Seek Thermal Inc.’s new Seek Thermal Camera for iOS ($199) is offering a fundamentally different type of camera for your iPhone, iPad, or iPod touch. Using a Lightning connector, the Seek Thermal Camera adds affordable thermal photography and videography features to any late-2012 or newer iOS device – the heat-sensitive sort of vision best-known from the Predator movies. While it’s not case-compatible, this accessory is otherwise the most practical thermal camera currently available for iOS devices. (An Android version is also available.) 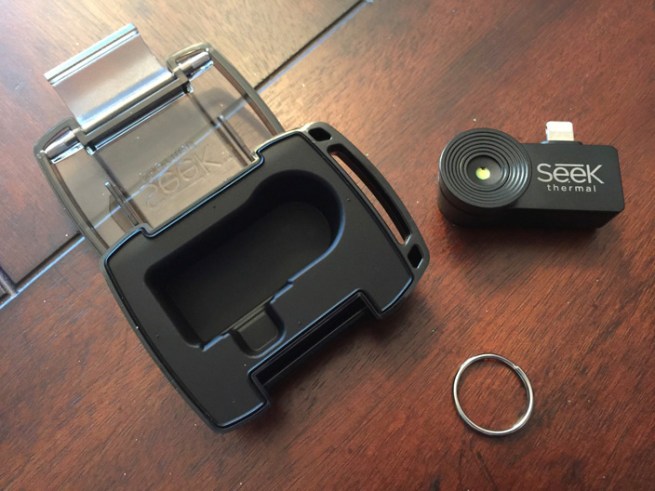 As accessories go, Seek Thermal Camera is pretty small. Made from thin but quality black magnesium that resembles plastic but with added durability, the housing is a little narrower than the iPhone 5/5s, around three times the thickness, and a bit over an inch tall with a bulging circle around the lens.

The lens is notably on the left edge rather than centered, so if it’s mounted facing backwards, it’s closer to being aligned with an iPhone’s rear iSight camera — the actual alignment and proximity will vary based on the specific iOS device you’re using.

Seek Thermal also includes a durable, clamped hard plastic carrying case with a smoke-clear top and an opaque black bottom, plus a keychain ring to help you carry the case around. 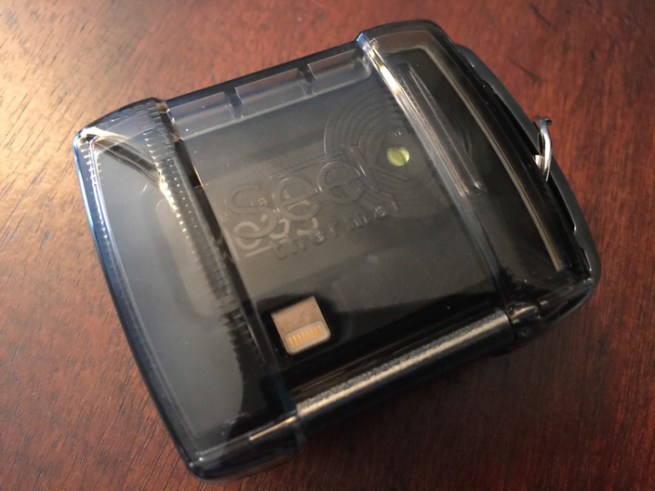 Understanding how Seek Thermal Camera works isn’t as easy as visiting the developer’s web site, which presents some large, full-window photos and fast-moving “simulated” videos to show generally how the accessory operates. In reality, the camera includes a much lower-resolution array of thermal pixels, behind a tiny lens with a slightly narrow 36-degree field of view. It’s accessed using a free iOS app called Seek Thermal, which is currently iOS 7/iOS 8-only, and with an iPhone/iPod touch-specific UI. You can run the app on an iPad without problems, though it’s just an upscaled version of the iPhone interface. 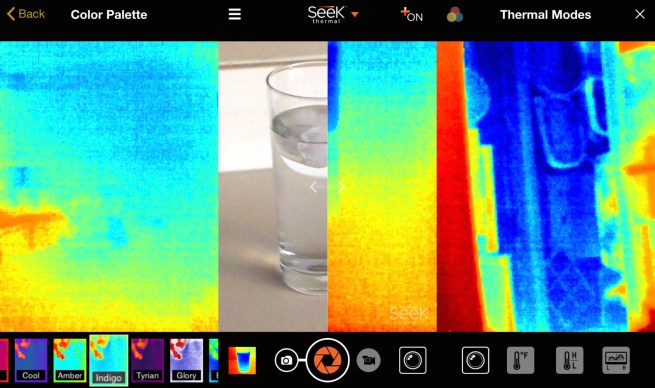 If you flip between your iPhone iSight camera and Seek Thermal — something the app allows you to do for comparative purposes with a somewhat wonky slider — you’ll notice that the iSight camera captures noticeably wider images.

But the real difference is in resolution, where the gap is nearly 20 times in the iPhone’s favor. Seek’s native resolution is 206×156, saving still images and videos at an extrapolated 832×624 resolution. That’s four times the sensor’s actual gathering capabilities, albeit with what appear to be digitally softened edges, as shown below.

The app also overlays a Seek Thermal logo against the bottom right corner. Between the resolution and the overlay, you can’t expect beautiful shots from the camera, but then, it’s designed as a tool for functional purposes. 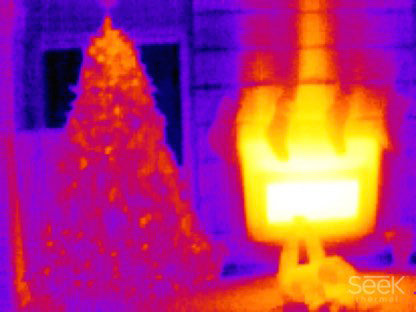 The key thing Seek Thermal Camera offers users is the ability to differentiate between objects using temperatures in the absence of available light. Using long wave infrared, Seek is capable of detecting temperatures ranging from -40 to 330 Celsius, with app-assisted modes that can display the entire temperature spectrum or filter out certain temperature ranges. If you wanted, for instance, to see only objects that were at or above regular human body temperature, you can set the app to only be sensitive to things above 37 degrees Celsius. Similarly, you could check for leaks in a cold water pipe by adjusting the sensitivity to show only things below 10 degrees Celsius, then scan the pipe for signs of motion.

We tested Seek Thermal with extremes ranging from ice cubes to a raging fireplace, and while the imager isn’t finely detailed enough to show the precise contours of the ice cube in a glass of water, the camera does accurately differentiate between the broad range of temperatures enough to show cold zones, hot zones, and whatever’s in between them.

Presented with a narrower range of temperatures — the ambient air and carpeting around a resting dog’s face – Seek Thermal automatically adjusts its color palette to show relative hot and cold zones, rather than requiring the user to do so. You can also select from a bunch of different color schemes with names such as “cool,” “amber,” “tyrian,” and “glory” if you prefer one rainbow look to another; a more practical feature overlays numbers and indicators to show the highest and lowest temperatures currently sensed by the camera. 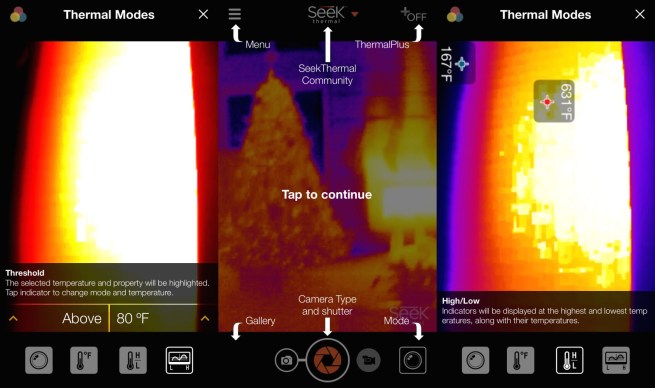 There are a few caveats worth noting. In real-world use, Seek Thermal’s video output is on the sluggish side — perhaps 5 frames a second, which isn’t great for making anything except problem-solving recordings. There’s also a quiet but constant clicking sound as the sensor repeatedly updates its thermal findings, so if you’re hoping to use it to actively surveil things outdoors, you’ll have to hope they can’t hear you ticking away from a distance.

Last but not least, case compatibility is practically zero, as the Camera has a nearly flush Lightning plug and a large enough footprint that it can’t be attached to any encased device save ones without bottom protection. 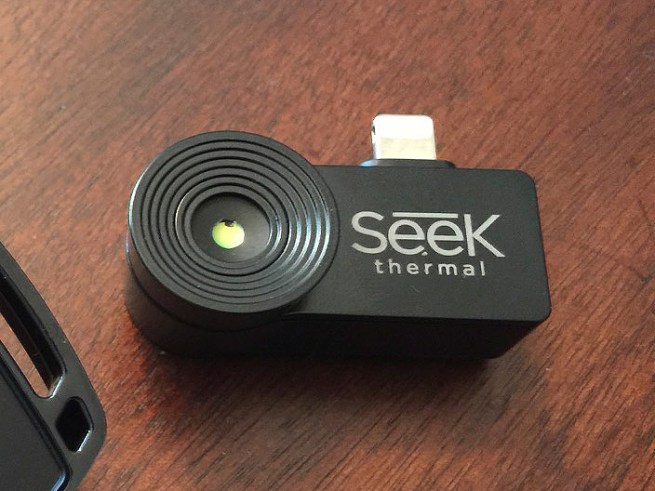 Seek Thermal Camera’s truly killer features, however, are the device-agnostic design and the $199 asking price. That’s $150 less than the MSRP of its closest iOS competitor, FLIR ONE, which is limited to working only with the iPhone 5/5s and built with a lower-resolution thermal imager.

Cameras like this aren’t going to appeal to everyone, but an accessory that works across multiple Apple devices and sells at a lower price point has a better chance of reaching users than a pricier, model-specific alternative. Seek Thermal Camera could be improved, but it’s a good option if you want a thermal iOS camera, and worthy of our recommendation. 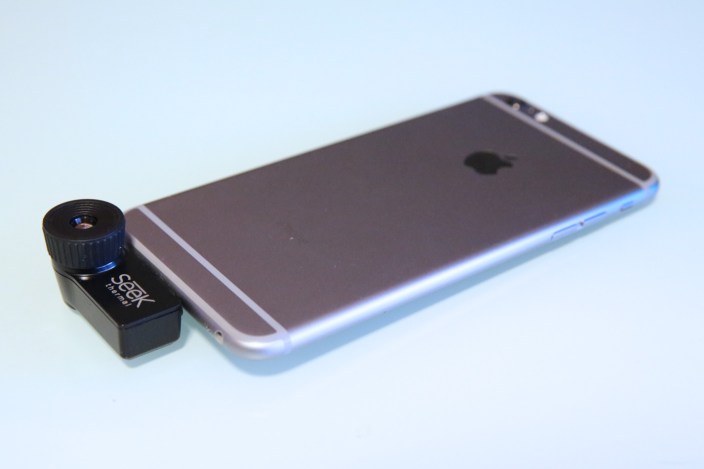 In January 2015, Seek announced Seek Thermal XR ($300), a modestly updated version of the original Seek Thermal with two major changes: a manual focus lens and a markedly higher price point. While the basic body design, specifications, and pack-ins of the original Seek Thermal Camera have been preserved, the XR model offers “xtra range” — the lens is now fixed at what Seek calls a “20-degree field of view” (versus the original’s 36-degree FOV), and a rubberized knob lets you adjust the focus between macro close-ups or distant objects. Seek says that “[s]pecific feedback from law enforcement officers, hunters, boaters, and electrical engineers led to the design of this remarkably versatile, extended range thermal camera.” 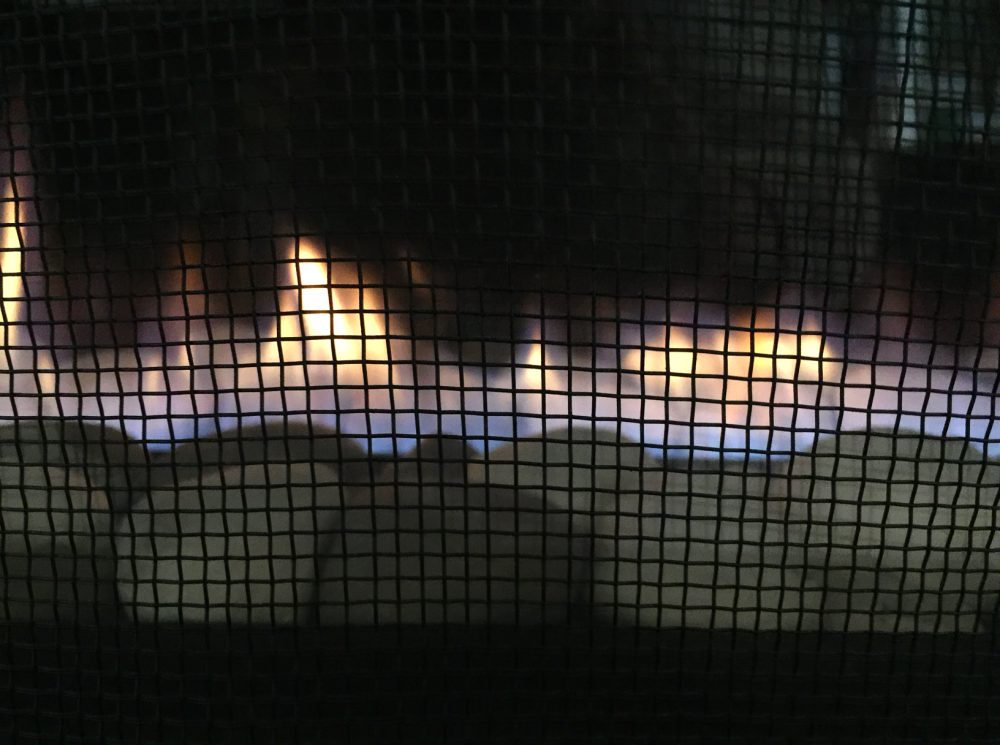 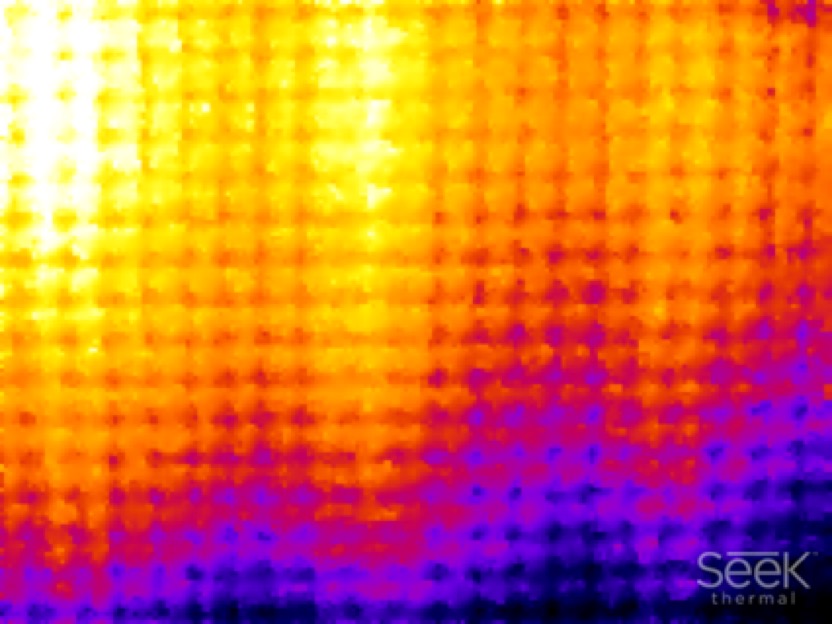 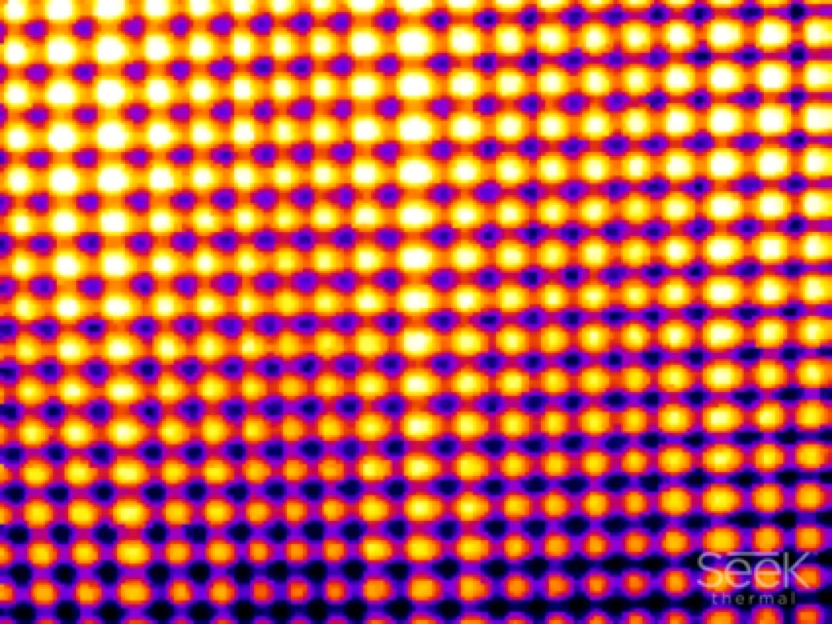 The sample shots here begin with photos taken by the iPhone 6 Plus’s built-in rear camera, as contrasted with the results from Seek XR. A fireplace image taken by the iPhone clearly shows a metal mesh in front of active flames and rocks. Using Seek XR’s focus knob, you can focus either on the heat from the flames, or on the mesh right in front of them. Note that the 20-degree field of view isn’t wider than the regular Seek (like a 20mm-equivalent lens), but rather narrower, equivalent to perhaps an 80mm lens. 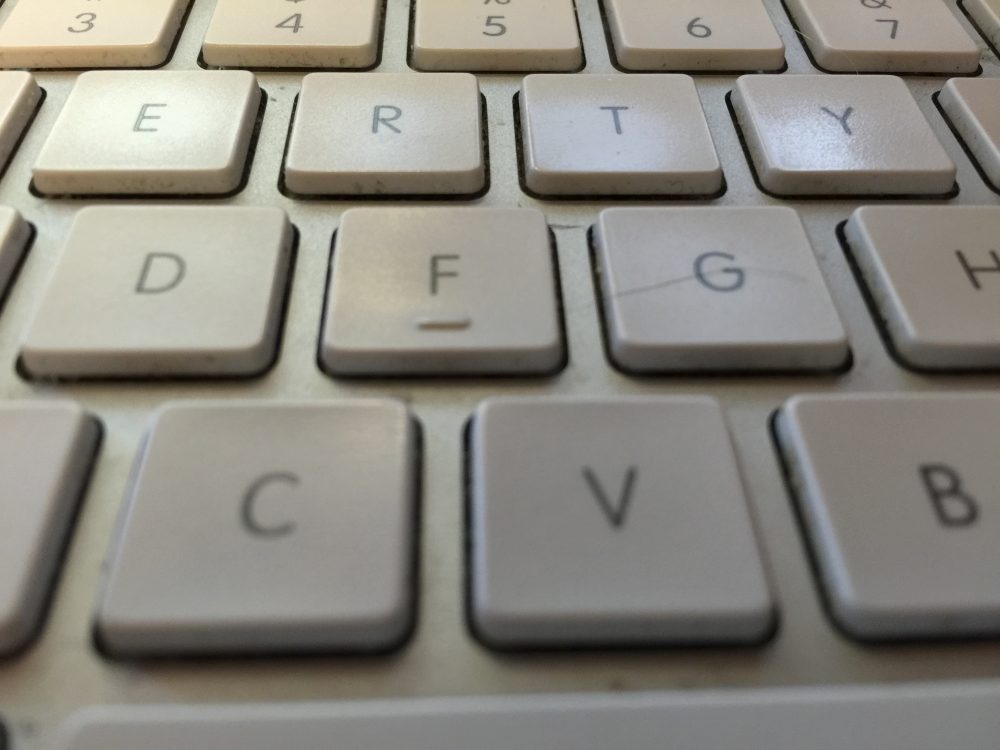 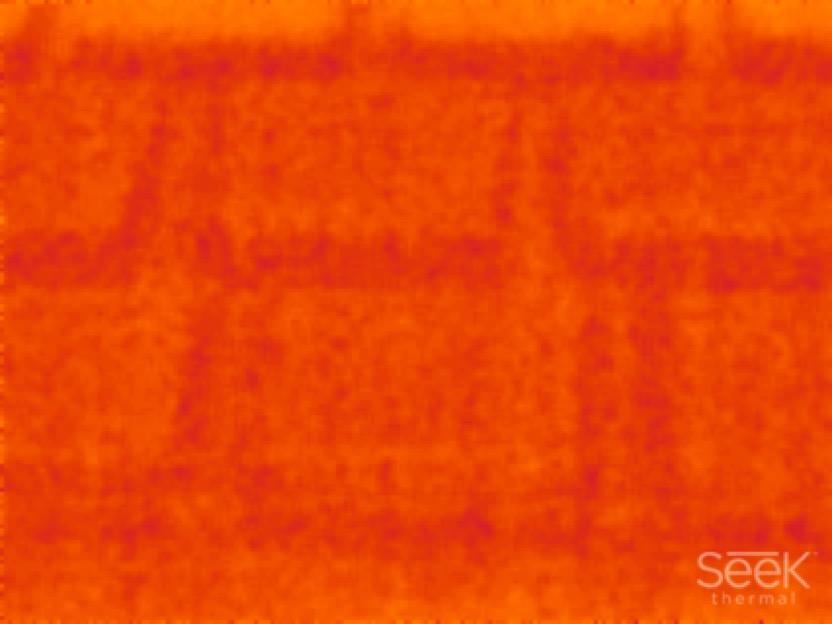 This means that XR excels at focusing on things that are close, like examining tiny heat traces coming off of small computer parts, and can help you see the heat levels in objects that are far away, while the regular Seek is much closer to a regular camera that happens to use thermal pixels. Seek claims that the effective focus range is from 8 inches to 2,000 feet away. 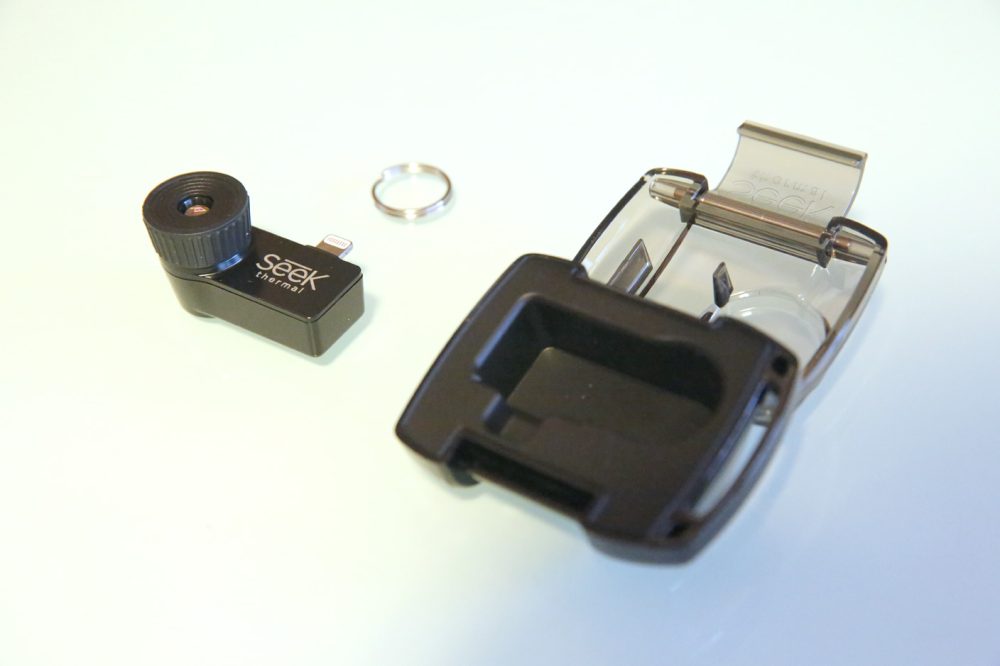 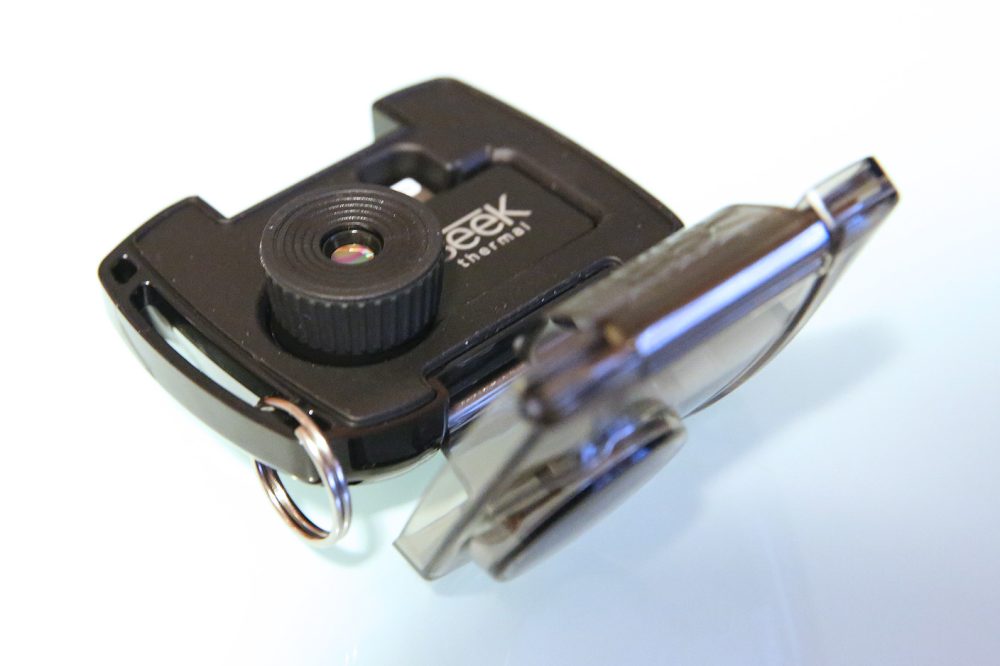 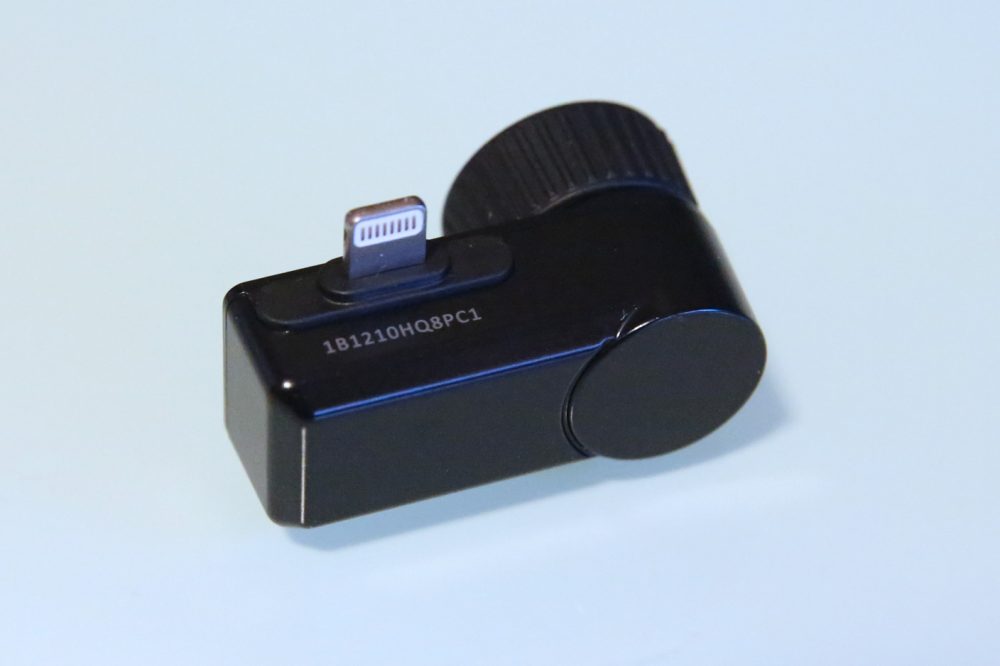 Otherwise, Seek XR is basically the same as the original Seek, which notably has jumped in price from its original $199 to $249, as XR arrives at $299. You can decide for yourself whether the benefits of macro and a fixed 20-degree lens are worth the premium for your personal needs. Seek Thermal XR can be purchased here.