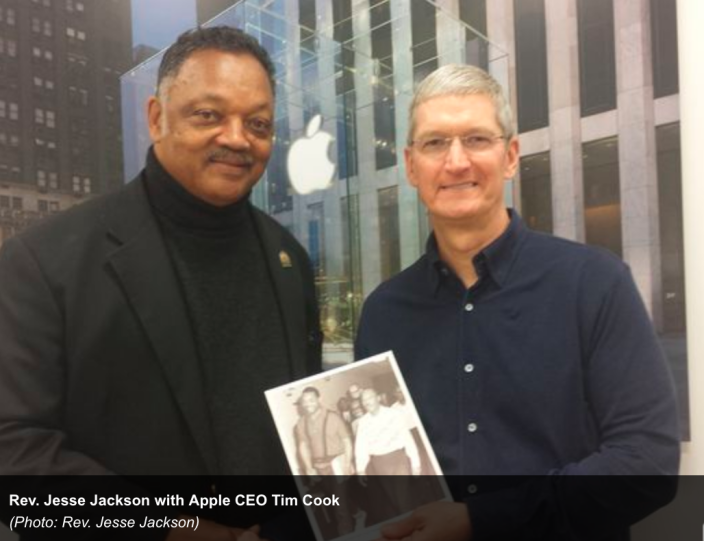 USA Today reports that civil rights leader Rev. Jesse Jackson met with Apple CEO Tim Cook yesterday ahead of a rally scheduled for Thursday outside Apple’s headquarters to raise awareness for a growing income gap and diversity issues in Silicon Valley. Apple also issued a statement and said Cook’s meeting with Jackson was “productive” and that it remains “deeply committed to diversity” and human rights issues:

In a statement, Apple spokeswoman Kristen Huguet said: “Apple is deeply committed to diversity within our company and the advancement of human rights around the world. We had a productive meeting with Rev. Jesse Jackson and we value his input. We look forward to working with him, our employees, customers and other stakeholders as we look for ways to do more.”

In another statement, Rev. Jesse Jackson said he was “impressed” by his conversation with Cook and that the Apple CEO “has a real vision for Apple and he sees the value in inclusiveness.”

Earlier this year Rev. Jesse Jackson urged Tim Cook in a letter to take the lead in the treatment of low-paid contractors like security guards. “Contract workers […] do everything from driving shuttle buses to cooking in the cafeteria. But as the tech workers they serve are showered with eye-popping perks, service workers often struggle to make ends meet in the pricey Bay Area, advocates say,” Jackson said in the letter.

On Thursday Jackson along with others plan to protest outside Apple’s headquarters in Cupertino to, according to USA Today, “shine a light on the growing wealth gap in Silicon Valley.”