Some Genius Bars are being repurposed for the holidays, but other changes loom 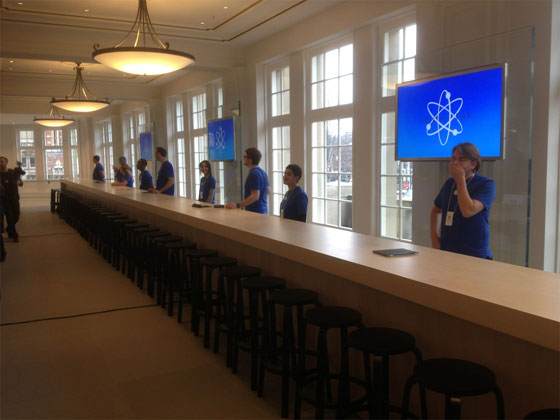 As they’ve done in years’ past, some Apple retail stores this holiday season will repurpose the Genius Bar for additional product space, pick-ups, or other uses as Apple attempts to make the shopping experience for customers as smooth as possible, 9to5Mac has learned.

The repurposing for the holidays will only arrive in some stores depending on needs and traffic, with some stores scheduled to use the Genius Bar area to complete express sales and hold products scheduled for pick-up. Other changes, however, will go beyond the holidays as the stores under new retail chief Angela Ahrendts evolve to better deal with increased foot traffic.

For some stores that means that the Genius Bar itself might be closed until the new year, but Geniuses will still be available on the floor and at tables often located in front of the Genius Bar. Some stores will also not be taking Genius Bar appointments for a few days during the week of December 25.

While the changes mentioned above are strictly related to the holidays, rumblings among sources close to retail is that long-term Apple is flirting with other changes for the Genius Bar. Earlier this month we reported that Apple was recruiting retail employees with “a fashion or luxury background” suggesting Ahrendts was preparing retail stores to begin selling Apple’s first product to crossover into the fashion world, its upcoming Apple Watch arriving early next year.

The physical changes you’ll see this month are mostly seasonal, although sources tell us some new retail stores are changing the Genius area slightly with no Genius Bar-specific signage or monitors displaying tips.

The tweaks to Genius Bars, however, are likely to allow Apple to easier repurpose that part of the store on the fly to accommodate a store’s particular needs at any given time. It doesn’t mean Genius Bars are going away, as Apple has also recently implemented improvements to the Genius support experience. We reported back in July on some of the recent changes at retail implemented by Ahrendts. Among those changes were enhancements to the Genius Bar including increasing the amount of time customers are able to book with Geniuses.