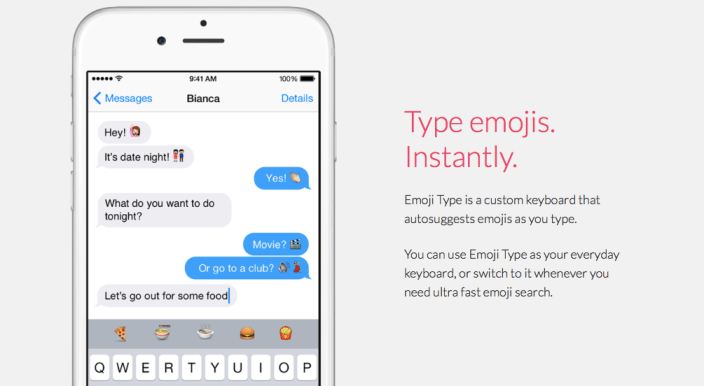 If you’re a fan of emoji, you’ll want to 👀 at Emoji Type, a new third party predictive keyboard for the 📱. Emoji Type comes from the iOS developer of Product Hunt. Like with any iOS 🎹, installing the Emoji Type app prompts you to enable the keyboard in Settings. Once you’ve done that, you can switch to Emoji Type by hitting the 🌐  icon on the keyboard.

Emoji Type 🎁 🎁 you with a Quick Type style suggestion bar, but populated with emoji instead. When you begin to 📝, you’ll see corresponding emoji pop up in the suggestion bar, and typing any of them replaces the word you’ve typed with that emoji. In a neutral position, the keyboard will display an assortment of common emoji you might be likely to use.

I’ve been 🙏 for a keyboard like this since iOS 8 was released, because it greatly simplifies the process of 🔍 the right emoji without having to dig through pages of icons.

However, there are a few caveats. First of all, autocorrect just isn’t as good with Emoji Type. This isn’t really the developer’s fault. 🍎 requires that developers implement their own version of autocorrect for third-party keyboards, so there’s no real way to access the system’s 📚. Secondly, I’d love to be able to repeat emoji. When you tap an emoji, it disappears from the predictive bar, but sometimes it’s nice to send multiples of the same emoji to someone. 😂😂😂😂😂

Emoji Type is $.99 in the App Store. Go pick it up and create your own history lesson. Make sure to check out our roundup of other great third-party keyboards for iOS.